My history with FuRyu’s published works has been rocky, to say the least, so I was a little hesitant to try this one. HamaTora: Look at Smoking World was a game that originally slipped past my radar in 2014, and I questioned whether an anime spin-off title from an iffy publisher would be worth the thousand yen price tag from the local store. A maxed-out point card helped cover the monetary costs, and shortly after that recent disasters left me with a lot of time on my hands, so I took the plunge.

HamaTora: Look at Smoking World takes place on a tangent to the anime series HamaTora, but knowledge of the show isn’t necessary to understand or enjoy the game. The show takes place in Yokohama, where a group of private investigators known as the Troubleshooters operates. The game takes place in the fictional Hamakaze neighborhood of Kobe, where a group of meddling teens calling themselves the Troublebusters does odd jobs. It’s only by forced coincidence that both group names can be contracted (under Japanese rules) to HamaTora, and all cameo appearances from the show are stuck in the side-missions.

As it stands, the port area of Kobe, Japan, is having its share of problems. Rival gangs of disaffected teens roam the streets between the Hamakaze shopping arcade and the local Chinatown, the yakuza are up to no good, and someone’s been kidnapping teen girls for nefarious purposes. Oh, and there’s a been a plague of memory loss across town, as people suddenly forget small items, their friends’ names, or even the faces of their family. At the same time, a handful of kids in town have developed what can only be described as superpowers. These two facts are not unrelated. 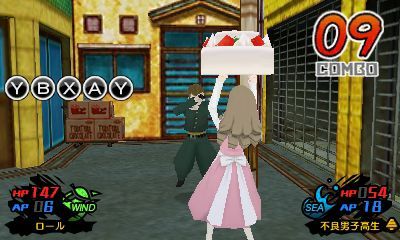 This is where the main tie-in to the show exists. In this universe, a rare few individuals possess a sort of power known as a Minimum, but the game ties into a major plot thread in the anime where a mysterious group was experimenting in artificial Minimums, often to the detriment of the newly gifted. The cast of this game unfortunately come by theirs artificially, though they don’t realize it at first. The game doesn’t really do anything with that particular Sword of Damocles, though. Natural or induced, the actual range of power can be quite varied, as can the trigger to activate it. Just in the game, powers can be activated or sustained through direct electrocution, incredibly awful puns, careful contemplation of the works of obscure German poets, or copious amounts of pork buns. For the player-avatar, the power is activated by a whiff of perfume, specifically that of the golden everlasting (Xerachrysum bracheata), and gives access to the eponymous Smoking World.

In the Smoking World, shadowy demons lurk, holding tight to fragments of stolen memory. Most chapters of the game, and even a few of the side-missions, end with a battle in that place, but there isn’t much else to do there. No exploration or dungeoneering; instead the experience is very straightforward about getting to the battle then back to reality. This is unfortunate, as the game could have used that extra layer of experience. The Hamakaze neighborhood by comparison is incredibly detailed, with much of its design inspired by the actual neighborhood surrounding the Kobe Chinatown district. There are plenty of little secrets to find, often aided by specific characters’ powers, and over a hundred individual NPCs living perfectly ordinary lives therein. As the bulk of the game exists in Hamakaze, but the bulk of the main plot rests in the Smoking World, the overall experience can feel a bit lopsided. The main story is unfortunately rushed at the end, when an explorable Smoking World would have been quite welcome.

The side-missions are a treat, at least. Every chapter comes with three or four, plus an extra missions folder for the cameo events and miscellaneous others. These missions include all the little requests which one might expect for a group of meddling kids with dreams of being detectives: cheating boyfriends, gangrel youths, lost pets, babysitting, etc. The writing and characterizations are the highlights here. In fact, a game of just that side, minus the supernatural elements, would have been quite entertaining in itself. 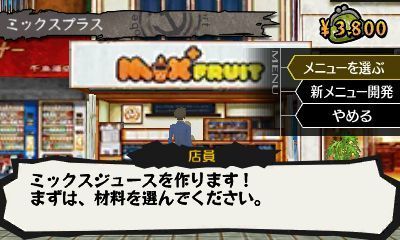 The game definitely falls within the visual-novel region of the RPGestalt by structure, though without quite so many talking-head moments or splash pages in lieu of real action. Like many games in its subset, battles are tactical in nature, but HamaTora does some interesting things with it. Using an action point system for movement and attacks, the characters chain individual attacks into combos similar to the system in Xenogears, with extra attacks or bonuses gained at the end of a command chain. For added strategy, it’s possible to have an attacking character duck left or right to flank an opponent before attacking, at the cost of one action point. Thus it is possible to hit one enemy from behind four or five times in a row.

When it comes to character advancement, HamaTora takes a unique approach by incorporating a local Kobe juice shop called Mix+. Essentially, this game forgoes experience levels in favor of a smoothie-based stat increase system. The player has to acquire ingredients for the shop to mix together, and the resulting creation can be quickly slurped down for a permanent boost to strength, defense, hit points, etc. Other recipes produce smoothies for use in battle, giving temporary bonuses or removing status ailments. Finally, there is a range of smoothies made with floral extracts which raise emotional attributes such as sadness, love, or enjoyment. Each character has their own dominant emotion, and thus their own specific blends to drink, and raising these is the only way to gain new attacks and combo skills. Even though they’re teenagers, however, their gullets are not bottomless. Each character can have three before it becomes necessary to build up an appetite again through more fights.

The only problem with this system is one of cash flow. The only fights available outside of missions are from the ne’er-do-well teens who hang out at one end of the arcade, and they barely have pocket change. Three missions are repeatable, but the first two have minimal rewards while the third encompasses the entire endgame (four battles, a ton of dialogue, some cut scenes, and the ending credits) before any cash is awarded. It is unfortunately likely that the player will hit a roadblock with one of the chapter bosses well before the end, at which point the options for quick smoothie cash are sorely lacking. More regular avenues of monetary gain would have been appreciated. 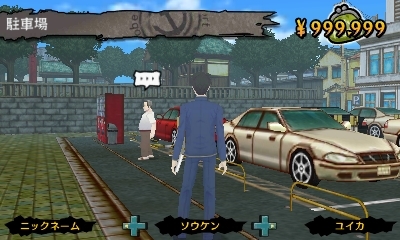 I wish the game gave that much cash.

Visually, the game is fashioned like a comic book in many ways. The buildings have a painted look to them that makes good use of bright colors and contrasts. The main characters all get these awesome intro videos that end with a close-up and a smart frame to show their name. The NPCs, while limited to about twenty models plus a few unique types, definitely look like a cross-section of the normal demographics of a Japanese neighborhood. The main cast is also quite varied, at least on the guys’ side, with skinny nerds, compulsive overeaters, and masked pro-wrestling aficionados, among others. The girls’ side tends toward skinny and cute, because Japan. Still, it is nice to see some creativity throughout the cast list, be it a young man willingly enslaved by his cat, an overly friendly transvestite, a grizzled homeless man, or a parade of unsavory gangster types.

Most of the game’s music is styled after some sort of slow jazz, though the actual style varies from time to time. This works well with the game’s overall aesthetic, as well as tying it back to both the anime and the original “HamaTora”: Yokohama Traditional, a fashion movement from the Seventies.

Unfortunately, this game never managed to be as slick and stylish as it wanted to be. It’s still a good game on its own, but there were plenty of ways for it to be better. The developers could have spaced out the revelations in the final chapter better, or even added a few more to help further develop the antagonists. The Smoking World could have done with some actual dungeons and exploration, rather than being just another combat background. In all honesty, I could see HamaTora: Look at Smoking World going toe-to-toe with Persona in many respects, if they’d taken some elements far enough. They didn’t, however, so we are left with an interesting game that was largely good enough, but which could have been awesome.