What do you get if you take the battle system from the recent Ys games, simplify the leveling system, and multiply the cuteness by 100? Gurumin: A Monstrous Adventure. It takes everything that Nihon Falcom does so well and makes it much more accessible to both players with a lot of RPG experience, and more importantly, to those that are newer to the genre.

The game begins with the heroine, Parin, arriving in a small mining town to live with her grandfather while her parents are on an archeological dig. When she gets there, she is eager to meet the other children living in the small village, but she is told that she is the only child living among the adults. Downtrodden, Parin goes to meet some of the other residents when she sees a dog growling at a young girl. Leaping into action, Parin delivers a kick to the dog to rescue her. The girl introduces herself as Pino, a monster living in Monster Village. She also tells Parin that only children can see monsters and invites her back to the village which is accessible through a dimensional warp of sorts behind a hole in the wall in the back of town.

Upon arriving in Monster Village, Parin meets all the monsters, but the introductions are short-lived; a group of Phantoms, beings from another world bent on rebuilding their kingdom in the monsters’ world, attacks and kidnaps Pino’s brother, Puku. The remaining monsters tell Parin of a legendary drill that was once used by a human hero to save the village from a terrible dragon in the past. Parin removes the drill effortlessly from its resting place and sets off on a quest to restore Monster Village to its original glory and drive away the Phantoms.

The story is very light hearted and is easy to follow. It’s not particularly deep, but it fits the tone of the game and is not a big issue. Though the story is relatively straightforward, there are a couple of twists later in the game which make the game’s climax more exciting.

As mentioned before, the battle system will be familiar to fans of other Falcom games; it’s an action-oriented, real-time system. What makes the game unique is that the game is devoid of experience points. Instead, Parin’s drill has three levels. Attacking enemies or destroying objects around you fill the drill’s level meter, and taking damage drops it. When the bar fills to certain amounts, the drill goes up a level, and Parin can deal more damage and use more powerful special moves. But if she takes repeated damage, she can level down quickly and have her attack power severely limited. This constant leveling up and down means that in order to progress throughout the game, skill is required; one simply cannot power level to kill a boss. Things are made slightly easier by items and special areas within levels that can restore one level of power to the drill. 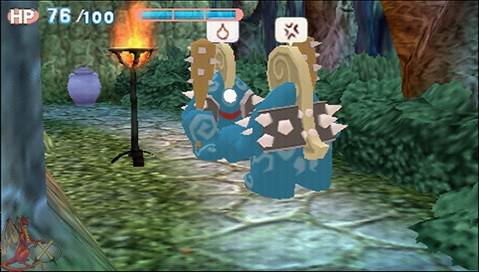 That’s it! One of us has to go change, or I’m not going to the party.

Visually, the game has a very cute cartoony look to it. All the levels are bright and colorful, and the enemies Parin faces are all equally so. Though there are only a few types of Phantoms to fight, there are numerous accessories they use to add to their abilities. For instance, a Phantom might have a spiked vest that can only be destroyed by a charge attack, while others may have the drums associated with Japanese thunder gods and attack with lightning. Other enemies have combinations of these things and will attack accordingly as each accessory is destroyed. Parin can then collect these destroyed items as Junk for use in upgrading her own equipment.

Gurumin is definitely a treat for ears as well as the eyes. Though there are only a handful of tracks, each is very catchy and upbeat. While it would be nice if there was a greater variety to the music, Gurumin does well with what it has. Along with the music, the sound effects are very well done, from the battle cries of Parin to the sound of her drill, which might evoke memories of sitting in a dentist’s chair from some players. All in all, the game is nearly as good aurally as it is visually.

One can get access to the final boss in eight to ten hours, but to get the true ending, every stage must be completed. This brings the total time to around fifteen hours. For completionists, there are also several side quests and mini-games that can extend gameplay out far beyond that. 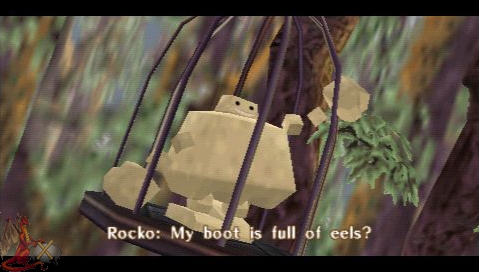 As for the difficulty, it depends on the game’s setting. Most players will probably start with Normal mode, which isn’t too hard. Some of the later levels have some tricky platforming, but it’s nothing that some practice can’t overcome. There is also a Beginner mode that will also assist with jumping along with making the game easier by reducing damage done to Parin while increasing the strength of her attacks. For those that finish Normal, there are several other levels of difficulty that are unlocked by finishing the game again on harder settings. There is also an optional boss that can only be beaten by the very best players, even on the easiest setting.

The localization is probably the place where Gurumin shines the brightest. The English voice cast does an excellent job during the game’s story sequences. It certainly shows that Mastiff carefully picked experienced voice actors to fill the roles. Those wishing to experience the Japanese voices may do so by unlocking them via an easter egg while loading clear data. While both casts are good in their own ways, the English voices really seem to fit the characters’ personalities best.

Overall, Gurumin: A Monstrous Adventure is a solid game that combines a simple battle system with excellent English voice acting to provide a really fun game. This is made all the better by the relatively low load times throughout the game. It’s probably not for everyone, but there is certainly appeal for those that can handle the game’s sheer cuteness factor.