How to Outsmart Devils

Accepted into an academy for learning magic, Lillet Blan quickly finds herself surrounded by a number of students and teachers with their own plans and aspirations, most of which typically go beyond simply learning or teaching magic. Mix in the fact that the Archmage is sealed there, along with the Philosopher’s Stone, and the simple student’s life becomes something else entirely in GrimGrimoire.

Battles take place in real time, though they can be paused should the player need to take a break, check out what’s going on in other parts of the map, or even look up summon and rune information. Players typically begin each battle with a few summons and a pool of mana, but it’s important to summon and harvest more. Mana enables Lillet to summon creatures from runes, create new runes, and level up runes. Leveling up a rune will have various effects, such as allowing them to summon new creatures, teaching summons new skills, and powering up certain summons. Because mana is vital to so much, it is important to manage it strategically. Doing so is often as important as effectively directing a small army of summons as they take on enemy armies in an attempt to destroy each other’s runes.

There are twelve runes and just over twenty summons available, and they are divided into four types: Glamour, Necromancy, Alchemy, and Sorcery. This determines which have a natural advantage or disadvantage next to those of other types. Summons’ attacks are also divided into substance and astral components, with each component of the attack working only on the body type that the enemy has. For example, summons with attacks that are primarily substance will have a harder time against summons that have astral bodies because they are only affected by astral attacks under normal circumstances. These factors allow for a large number of tactical options and add a lot of flexibility to the battle system. 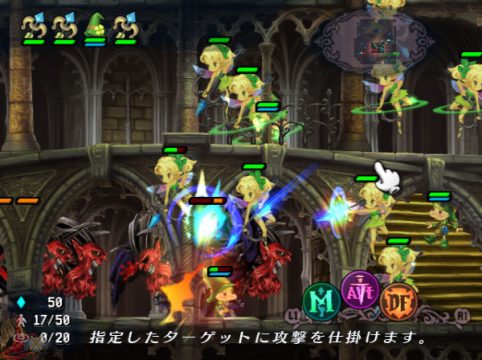 It should be noted that aside from attaining new Grimoires/runes and learning how to unlock their higher level abilities, nothing carries over from one battle to the next. Each battle has its own starting units, runes, and conditions, and it’s completely self-contained as far as mana collection, summoning, and leveling up runes go.

Not only are battles enjoyable, the interface is good overall. It’s easy to place runes, command summons, and do just about anything. There are only a few areas that could use a good deal of improvement, both of which are really only a problem in the latter half of the game when Lillet can summon several dozen creatures at once. The first problem is that it can sometimes be difficult to keep track of the multitude of available summons. If a small yet vital creature is destroyed in an attack, it can sometimes be easy to completely overlook it without a unit roster. Also, though it is possible to switch between selected units on the same screen, it can take a while to do so when the screen is filled with dozens of summons. This can make it difficult to give commands when the desired recipient is hidden behind other creatures.

When not matching wits with her opponents in battle, Lillet is exploring her school, trying to figure out what’s going on and what to do, and eventually matching wits outside of battle as well. GrimGrimoire‘s storyline is a departure from the typical strategic fare, with students and teachers replacing the usual political drama. Most characters have their own agendas and plans for getting what they want, and the story is pretty interesting and well localized, if somewhat brief.

In these story segments, character portraits are not only well drawn, they also appear to breathe, speak, and gesture, giving them a greater illusion of seeming alive. Scene backgrounds compliment them nicely as well. The sprites in battle are also nicely animated, though most aren’t as impressive as the character portraits. Really, the only visuals that are bland are the battle backgrounds, which do not vary much over the course of the game. 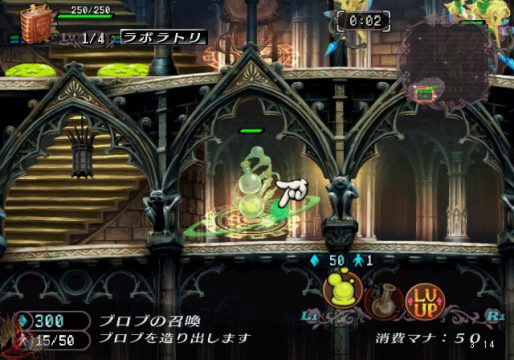 Unfortunately, the music and sound aren’t as good as the visuals. Instead, the quality is mixed, with the most impressive part being the voice acting. The sounds that summons make can get old over time, but at least most have enough voice samples to prevent them from becoming especially grating. The background music isn’t anything special, and there isn’t much variety, but the music seems to be intentionally designed that way so that it doesn’t seem intrusive or repetitive.

The game itself isn’t very long, and it will likely take players ten to twenty hours to complete, depending on their fighting style. Since difficulty is chosen by the player before each battle, that can also have a rather large impact on completion time. That said, there are lots of optional bonus battles that are unlocked as the game progresses. These can roughly double playtime, should players wish to attempt them.

GrimGrimoire offers a good deal of strategy along with a storyline that is a bit atypical for a game of its type. The visuals are mostly excellent, and the voice acting is good, though the background music is fairly plain. It’s not for everyone, but those who enjoy a game with a good amount of strategy that involves wizards, demons, and alchemy, among other things, will likely have fun with GrimGrimoire.