The Heracles no Eiko series arose back in the 8-bit days as a Greek mythology-derived knockoff of the Dragon Quest series. Five entries were made, and then it vanished for nearly fifteen years. Developer Paon eventually decided that reviving the series for today’s audience would be a useful thing, and the modern Glory of Heracles was created. The resultant game is an interesting hybrid of new and old battle mechanics, and inadvertently demonstrates the incompatibility of high random encounter rates with combat that cannot effectively be waged on autopilot.

Glory of Heracles‘ plot resorts to the old standby of amnesia, but on a scale larger than usual. It begins with a young man who believes himself to be Heracles meeting a very effeminate person named Leucos, both of whom are immortal and lacking most of their memories. This pair eventually meets with a man named Axios who considers himself an irresistible ladies’ man, another man who also believes himself to be Heracles, and a young woman named Eris who possesses a snappy tongue. All five of these characters are immortal and have amnesia, which propels the plot along for awhile until they gain some sense of purpose. Only after the quintet gains an objective other than wandering around in search of memories does the plot pick up, though the quality localization helps keep things tolerable until that point, with plenty of amusing and well-written dialogue.

Random, turn-based battles await these characters when they venture out of town. These encounters have quite a bit to distinguish them from other games, such as the ether system. There are four elements that all spells draw ether from, and a fifth that is either replenished by using a spell from the other elements, or drained while charging the others. Casting a spell with insufficient ether on the field has the consequence of draining the caster’s hit points, making it a good idea to keep a careful eye on the ether meter. Enemies draw from the same ether pool, keeping the playing field level. Fueling further thought, spells with a larger area of effect have correspondingly higher ether requirements.

Using any attack that requires magic points brings up the option to let the attack be automatic, or to use the touch screen. A variety of micro-games await when using the latter option, with the reward being a greatly enhanced potency of the attack. Using the touch screen every now and then is a diverting novelty, but being assured of victory usually requires that these micro-games be performed quite often, until they have become a tiresome task.

The tactical notions at play in Glory of Heracles do not stop with magic application. Enemies do not instantly die when their HP is completely drained; they instead collapse and will disappear at the beginning of the next turn, unless they are Undead and revive instead. This enables the overkill system, whereby an attack that pounds an enemy more than is necessary to simply beat it will be rewarded with replenished magic points. The player’s team and the enemy occupy one of two rows, with most physical attacks and techniques being dependent upon the proximity of the antagonists to each other. 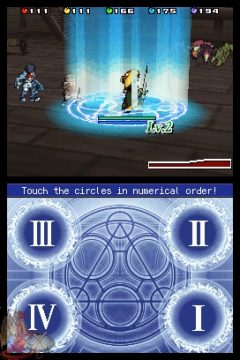 Get used to seeing this type of screen if you want maximum power from your attacks.

Particularly on the overworld with its egregious enemy encounter rate, all these facets combine to drag combat out for a long time. There is an AI option, which must clumsily be selected for each character individually instead of for the entire party, but users of it will find baffling actions being taken that drag encounters out instead of letting them end swiftly. Moderate enemies often require four to five minutes to dispatch, and using the touch screen to enhance attacks drags this out even more. Spell animations are not egregious, but they are also mandatory and conspire to further prolong skirmishes. The problem is not as aggravating in dungeons due to their lowered encounter rates, but it is impossible to go on autopilot when fighting anything, and that is a grating issue.

Glory of Heracles‘ interface manages to be user-friendly for the most part, though with the odd and time-wasting caveat that it must say each character has recovered after visiting an inn. Its use of the top screen to display a map of the current area is appreciated, and shops clearly display the effects of items and equipment before purchase. The skills and techniques imparted by new equipment can also be observed, a handy system that should be imitated by other games.

In battle, Glory of Heracles‘ visuals oddly resemble those of the Saturn game Guardian Heroes, a fact that is explained by Treasure’s character designer, Han, having worked on both. Animation in combat is fluid, if somewhat limited, and there is at least a fairly large variety of enemies to fight. Towns are rather limited in their architectural builds, and the game as a whole looks fine without pushing the DS’s limits. 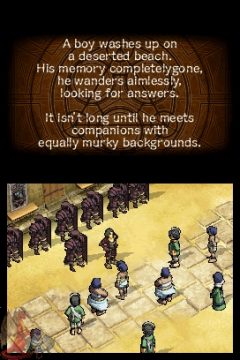 The cast makes a number of jokes about it, but the amnesia angle really gets monotonous as a plot device.

The score makes a number of wise moves, such as varying the battle theme as the game progresses. Most of the tracks are pleasant, and many are rather catchy. The soundtrack as a whole is not one of the greatest on the DS, but does its job well and should not be supplanted with something else while playing.

Having five immortals for a party means that losing is never permanent in Glory of Heracles, with the option to simply get up and try again while keeping all progress if every member falls in battle. There are a few tight spots, but the usual solution of grinding will suffice if necessary. The game is roughly thirty hours in length, with a few minor areas to seek off the beaten path, but the linearity means there are no second chances if something was missed. Presumably the New Game + option is meant to correct that shortcoming, if one wishes to find everything that is hidden on the world map where random encounters predominate.

Glory of Heracles certainly has good aspects, and it takes the mythology of Greece seriously in constructing its tale. Its combat becomes quite wearisome, however, and the proliferation of serious adversaries as the game progresses makes this aspect take precedence. The story eventually becomes somewhat interesting, but before it does, only the witty lines from the localization team will hold interest. Glory of Heracles is not a disgrace, but neither will it claim a glorious medal.