For a Vast Future Review

Nostalgia can be very tricky to work with, particularly in video games.  Balancing everything in such a way to be interesting to newcomers, while appealing to the demographic that grew up on such titles is not easy.  Luckily, technology has improved to the point that new heights can be reached while paying homage to the classics.  Retreaux Games takes 90s throwback handheld RPG gaming and adds some new twists with For a Vast Future.  The result is a mixed bag as the fun combat ideas are tempered by a lack of challenge, while interchangeable party members fail to stand out.  The game is nonetheless approachable with a quick run time and enough nostalgic spice to not outstay its welcome.

For a Vast Future begins as the world deals with the fallout of a decades-long war between the two nations of Seralia and Tomello, which ended after Seralia decimated Tomello with a nuclear weapon.  During the war, both sides incurred many casualties, and Seralia’s ambitious leaders decided to cover up how the war ended.  Those further from the capital have had to deal with a lack of information and resources, while many simply did not return, leaving those left behind barely able to survive.

Chel is an orphaned Seralian scrap hunter who decides to loot an old military base on the outskirts of her hometown Hogtowne.  While searching the compound for scrap, Chel finds Darris, a robot struggling to find a purpose in life and who recruits Chel to see the world.  This leads them to their other two companions, Tarnstrom and Penton, and they get roped into an impending doomsday scenario put into motion by nefarious forces.  The doomsday plot is what holds the story together; while each character gets their own arc, these rely on unearned shifts in their personality to sudden resolutions.  The sudden shifts make the journey feel muddled and disjointed, so nothing gets the chance to breathe or grow to a natural conclusion. 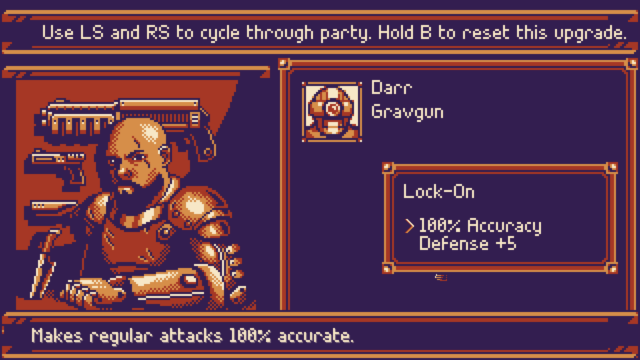 Along this journey, the party grows in experience and gains levels, but rather than gaining any attributes, additional levels just provide health.  Altering attributes is done by using SP, which is collected after every combat.  There are fifteen levels to gain in each attribute — dexterity, marksmanship, armor, luck, and evasion — that players can divide to make their party as they see fit.  Players gain so much SP over the course of the game that every attribute can just be maxed out, making every character a powerhouse in their own right, but the early building asks for some strategy in how they choose what each party member contributes.  The limited way in which characters stand out is in their weapon upgrades, a series of six collectibles found along the journey for each character’s specific weapon that offers one of two powerful attribute increases or alter the way some attacks work during combat, such as offering 100% accuracy or giving piercing attributes to basic bullets.  These upgrades can skew characters towards a particular attribute in the beginning but collecting enough of them causes the abilities to overlap between everyone making them all feel the same again.  This feeling is not helped since players can switch things around if they feel the need to.

In the early going players walk between locations, though it is thankfully faster than the titles of yore that For a Vast Future takes inspiration from.  Later players gain access to a bike, which allows for instantaneous transportation from the menu to any town or dungeon, but the additional movement speed on screen introduces some unevenness.  Another frustrating aspect is that players still have to backtrack all the way through dungeons once their bosses are defeated.  Everywhere can be revisited, and players are only locked to one area a few times due to plot reasons, leading to a greater sense of freedom than many other old-school games.  Encounters are shown onscreen and refresh in the same spot when players move to a new area, providing players ammunition, experience, and item creation drops when beaten.  This allows for easy grinding or avoiding enemies as players choose, partly because the enemy AI rarely beelines for players, often veering around drunkenly and making it simple to avoid them. 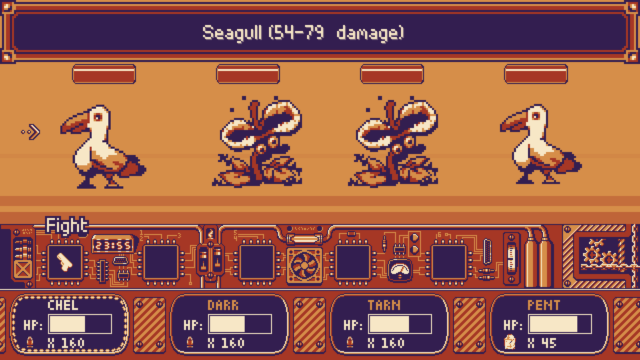 Seagulls, the bane of every world, whether it be past or future.

There are two main ways to combat enemies in For a Vast Future.  The first is by firing bullets from guns, with regular, elemental, and debuff bullet types able to be swapped out freely on each turn.  Beyond the traditional elements, For a Vast Future also includes exploding and piercing as damage types.  There are also bullets that gain power from sacrificing health or being near death.  Every battle drops basic bullets, which double as a form of currency to obtain more specialized bullets, but often drop a few specialized shots as well.  The game is so flexible in its abilities that there’s a way through weapon upgrades to make basic bullets the most overpowered attack in the game.

The other main option for damaging enemies involves items.  Specializing in items is very handy due to how well they compliment bullets.  Items provide the easiest method of healing, create new weaknesses for enemies, and provide most of the multi-target attacks that are offered.  Players can create new items after finding their schemas along the journey, with each item requiring a combination of the three scrap types that have dropped after each combat.  There are lots of effective ways to deal with each enemy, with many having easily exploitable weaknesses and all of them, including bosses, susceptible to debuffs.  While the party will come across enemies that are resistant to multiple types of attacks, the sheer amount of options ensure players will have little difficulty dispatching them.

For a Vast Future has a short run time with a simple but varied combat style that makes this a decent introductory RPG, if one lacking much challenge.  Very little preparation for combat is required and bosses can be defeated without them even taking a turn.  A quick save and restart option for defeated players lessen the threat, as do straightforward dungeon layouts.  With everything laid out so simply there’s little to sink into for veterans of the genre, but does provide a nostalgic kick all the same. 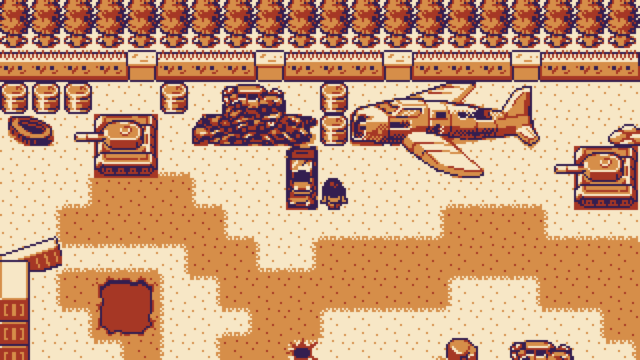 The attention to little visual details as well as the use of one colour in various ways makes everything pop.

The nostalgia isn’t limited to throwback mechanics. There is some delightful interplay between the 8-bit musical score and the charming visual style.  For a Vast Future is built to look and sound like a handheld game from the 90s.  The world and the menus can be changed to various sepia, black-and-white, or singular colour tones leading to the game dealing in gradual colour shifts.  The little details in each pixel adds to the overall nostalgic sensation, but brings the medium to new heights  Enemy designs are repurposed frequently, but each one fits in a heartwarming nostalgic way.  The tunes for each dungeon, town, and combat are all catchy adrenaline fueled synth beats, while the retro sound effects add to the auditory blast from the past.  The ability to find a way to show a variety of layers in the throwback audio design adds to the presentation.

For a Vast Future has some interesting ideas in its combat system, but the balance of options just makes everything too easy.  This ease and accessibility may be welcome for newcomers, but for veterans the main appeal ends up being the nostalgic views and sounds, while character development and overall plot are hindered by sparse words that leave little impact on their own.  For a Vast Future feels like a fun walk down memory lane, albeit a breezy and brief one. 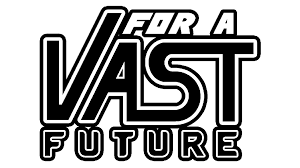 Tags: For a Vast FuturePCRetreaux Games