What’s Important Is Being True to Oneself

There are a few potential different tacks to take with a rerelease of a game of many console generations gone by. There is the straightforward emulation method like retro games use on PSN or the multitude of mini-consoles where a functioning version of the original is made available, but often with nothing done to compensate for the differences between modern televisions and the CRTs of old. This method also relegates modern players to experience the game as it was originally created, warts and all. On the other extreme, a company can remake the classic from the ground up, polishing the original with modern graphics and improved gameplay. However, when Square Enix set out to rerelease Final Fantasy IX on the PC — now available on Switch and Xbox One — the developers settled on an interesting middle ground between these two extremes. New character models and cleaned-up backgrounds are complemented by some “cheats” to smooth out the gameplay for new and returning fans. While it may not be as flashy as the eventual remake of a certain stablemate may be, the changes allow a nearly twenty-year-old game to be just as enjoyable today.

Final Fantasy IX opens in the city of Alexandria. A theatre ship, the Tantalus, has come to put on a performance for the inhabitants. While the town is abuzz with excitement, the ship’s crew has an ulterior motive. Some of the crewmembers, including our lead Zidane, are using the event as a distraction to kidnap the heir to the throne, Princess Garnet. Little do they know that the Princess herself has plans to use this occasion to run away from Alexandria. Her mother, Queen Brahne, has been acting strangely since her husband died and she came under the influence of a suspicious man. After a wild chase across the castle, culminating with Zidane and Garnet stumbling into the play, they now set out together on an adventure that will not only get at what is rotten in Alexandria, but determine the fate of the entire world of Gaia.

The opening to Final Fantasy IX is enchanting; weaving a delightful back-and-forth between the play, the Princess trying to run away, and Zidane trying to kidnap her. The perfect pacing of scenes like these becomes one of the hallmarks of the experience with this game. The balance between combat and story is never lost and there aren’t sections with constant encounters. Throughout the game, the player is bounced back and forth between different parties and varying storylines are picked up and interlaced together in a satisfying way. Pacing is an important component of video games so the player doesn’t spend too long sitting through cutscenes or get frustrated by high encounter rates, and Final Fantasy IX nails this aspect. 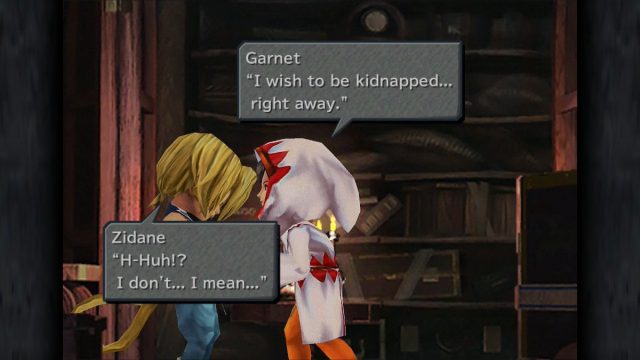 Garnet knows how to put Zidane on the wrong foot.

The cast also makes this game a joy. Zidane is incredibly likable, and discovering his dark past is as entertaining as his attempts to woo the Princess. Speaking of Garnet, she is certainly no damsel in distress; instead, she’s the type to go diving headfirst into danger, making for a fun lead. The rest of the supporting cast is fantastic as well. There’s Freya, the Dragon Knight who is searching for a love that has forgotten her; Steiner, a straight-arrowed and easily exasperated knight from Alexandria who constantly gets into entertaining conflicts with Zidane; Quina, a strange creature that hasn’t met anything that he/she won’t eat; and child mage, Eiko, who must be one of the more tolerable kid characters in a videogame. It’s an eclectic, diverse, and entertaining group, and every interaction between them is a joy.

While the above crew is great, it’s Kuja and Vivi, the final two major cast members, that particularly stand out. Kuja is a perfect Bond-esque villain; displaying utter contempt for the heroes’ ability to thwart his plans. Vivi, on the other hand, is a quiet, young black mage, one of many identical clones that seem to be running around. Vivi’s journey to discover the true nature of the black mages and find meaning in what is doomed to be a short existence is easily the most moving part of Final Fantasy IX.

While the story and characters in IX hold up when compared to modern RPGs, the combat system is showing its age. Like all the PlayStation Final Fantasy entries, it uses a version of the Active Time Battle system with the typical mix of melee, magic, and summoning. There are still a lot of menus to fumble through, and that experience isn’t improved by adding a time component. Additionally, for players who aren’t fully immersed in the Final Fantasy naming conventions, there isn’t an explanation for what the different spells and items do. The turn order is also opaque, leading to needless instances of setting up a healing spell when a revival spell would have worked better after a party member dies in the intervening turns. Having a big magic attack thrown back in the party’s face because the enemy casts reflect after the player has made their choice is never fun. 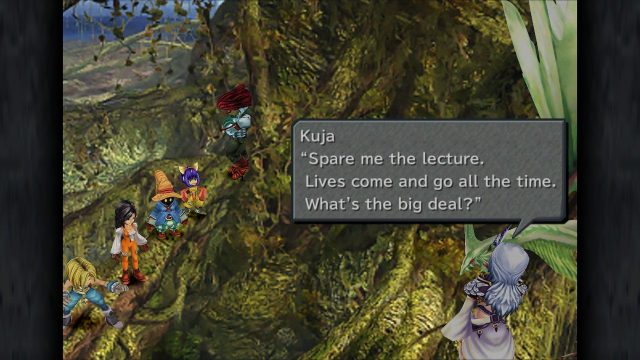 Kuja and Stalin would have made great friends.

However, if the combat limitations are a problem, this version of Final Fantasy IX provides ways to mitigate them. The combat cheats are accessed by pausing the game and allow the player to eliminate random encounters, speed up gameplay, do 9999 HP of damage with every attack, or allow the party to be in trance mode — this Final Fantasy’s version of limit break — at all times. It’s a shame there isn’t a dedicated fast forward button as some other games have implemented, but the fast forward still makes it quicker to get around. Combined with some other permanent cheats to max levels and abilities, these enhancements help smooth the rough edges that are to be expected playing a nearly twenty-year-old game.

Square also added autosave to the game, and this helps immensely. There are no more instances of losing hours of progress because a random encounter trips up a player who forgot to save. A few crashes occurred over the course of reviewing Final Fantasy IX, but when mere seconds of gameplay are lost thanks to the autosave feature, it’s difficult to give those flaws too much weight.

The graphics are another area of the game that got touched up, but the touch is lighter than might be suggested by the HD moniker that is associated with the marketing. The main cast’s character models have received considerable attention and look improved, but the enhancements to the backgrounds are more difficult to discern. Because this isn’t a full remake, it retains the original’s 4:3 aspect ratio, so the game and cutscenes have letterboxing on each side. This is no longer a visually stunning game — the overworld segments look particularly low-rez — but the enhancements help IX to not feel completely out of place. 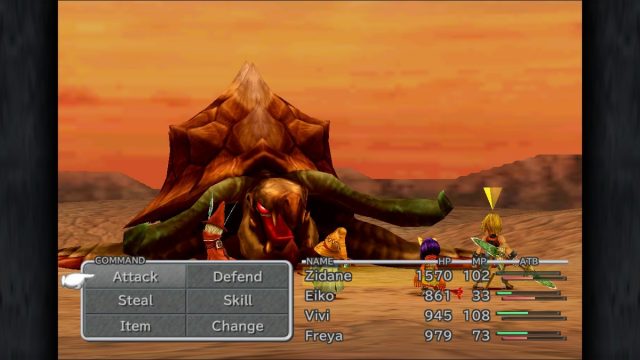 The battles and overworld remind that this is a PlayStation game.

There are a few other things that could have used some attention. The overzealous camera panning at the beginning of battles, likely done to cover for the PlayStation’s notoriously long load times, feel especially out of place in a modern game. More concerning are some excessive load times during the first random encounter in each new area. Since there is no CD to act as a bottleneck, it’s hard to explain the excessive waits for flash memory. Strangely, it’s only the first encounter where this happens, whereas every other encounter in that area will load smoothly.

One area that neither needed nor received any touchups is the soundtrack. Nobuo Uematsu’s score for IX is varied and moving, fitting the scenes perfectly and filling the gap that’s left due to the absence of voice acting. The organ pieces for the confrontation between Zidane and Kuja are absolutely perfect.

I think Final Fantasy IX proves that the middle road between a complete remake and simple emulation may be the best path to take to revive older games. Welcome features like autosave and optional cheats let players old and new experience the game on their terms. Final Fantasy IX is an amazing experience, with a fantastic cast and story — it’s truly a masterpiece of the PlayStation era. This upgrade means that fans don’t have to wait years to experience it again without all the pitfalls of the original. 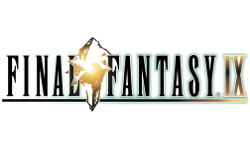