Black Isle Studios was on a roll in the late ’90s and early 2000s, before Interplay’s financial problems led to its dissolution. The first game developed under the Black Isle Studios name was Fallout 2, which was followed by a number of other titles with high reputations. Coming to Fallout 2 today, I needed some acclimation time with its interface. Once that was done, I understood the pull this title exerts on many people, because it was hard to stop playing, although the early going was a tough slog.

The player takes on the role of the Chosen One, a resident of a village called Arroyo that was founded by the hero of the first Fallout eight decades prior. Times are tough, and the Chosen One must seek out something called a Garden of Eden Creation Kit, a tool developed prior to the bombs falling that can revive the local environment. Tracking a GECK down proves a time-consuming endeavor, but it allows the Chosen One to explore numerous places and interact with some interesting denizens of the twenty-third century.

Fallout 2 does not deliver a core narrative that is continuously elaborated upon, though finding a GECK punches things up considerably for the climax. Exploring this stretch of what once was northern California and western Nevada affords plenty of smaller stories that often intertwine, and provides plenty of ways to shape the Chosen One’s moral tendencies. Stealing a secret weapon plan from a heavily armed enemy base, selectively aiding the four warring Mob families of New Reno, investigating anti-mutant incitement, and shoveling dung are among the many quests that can be completed along the way. It is possible to willfully slaughter everyone encountered along the way, but undertaking this course is guaranteed to incur the wrath of dangerous adversaries who would otherwise leave well enough alone.

Combat in Fallout 2 operates under an interesting engine akin to that found in many tactical games, where a small number of action points determines how much a character is able to do each turn. Position matters a great deal, particularly for melee fighters, and a hexagonal grid is used instead of the more commonly-seen squares. Enemies and allies play by the same rules, which can mean the player gets to sit around waiting when plenty of adversaries have to get into position. That is the only major caveat in a gripping combat system featuring a wide variety of adversaries that can often be tackled in more than one way. Simply attacking is always an option, but for an extra action point any strike can be targeted at a particular piece of the enemy anatomy with a high probability of dealing terrific destruction should it connect. The player has access to an enormous variety of weapons and combat maneuvers, ensuring that lack of variety will not be a problem. 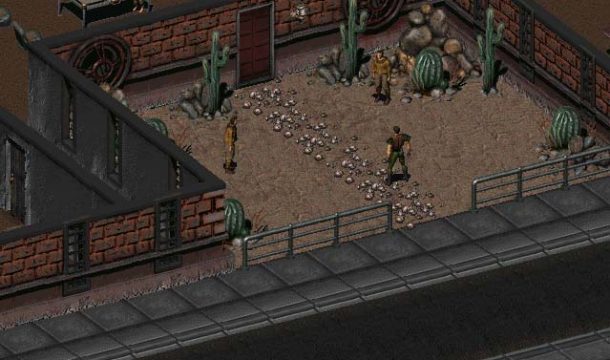 Pick the mob family in Reno to join, and kill off the others. Pretty sweet deal, eh?

Random encounters while navigating the world frequently feature two sides which the player can aid, or stand back while they kill each other. Black Isle Studios also inserted a few special situations into the random mix, which don’t necessarily feature any combat but enliven the Fallout world and keep things interesting. Getting slaughtered is a distinct possibility if enemies get lucky critical attacks, or if the player blunders into some very powerful foes, but the ability to save at any time outside of combat prevents this from being a source of unnecessary frustration. This ability also helps mitigate the probability of losing some play time due to the game crashing, which is an unfortunate eventuality that only the luckiest will escape. Bugs of various sizes and annoyance levels will pop up while playing, such as getting stuck behind three NPCs in a line or watching characters completely vanish, and reloading is usually the path past such things.

Even at the beginning the Chosen One’s abilities are affected by the player’s priorities, but with experience come many more opportunities to influence character development. Aside from bare HP growth nothing comes automatically, and choice of which abilities are enhanced greatly affects one’s experiences. It is possible to have a diplomat with friends to handle combat, a thief taking from the shadows whenever possible, a dervish with amazingly good throwing accuracy, or a weakling skilled at nothing more than avoiding incoming threats. The many dialogue choices that pop up throughout are well-written with the exception of an occasional typo, and many of them will only appear for a certain type of Chosen One, serving as an effective inducement to replay.

Getting to the good stuff in Fallout 2 requires some patience on the player’s part. After a very quick opening the Chosen One is dumped into a Temple of Trial, and getting out requires baptism by total immersion in the game’s systems. A cornucopia of weapons and choices awaits a Chosen One who leaves Arroyo, but none of that is apparent in this dull and tedious opening area.

Finishing the Temple of Trial and moving on doesn’t guarantee that a player will have acquired the necessary working knowledge of Fallout 2‘s multiple menus, which were made at a time when players were likely to have the full paper manual available for consultation. Many commands will require extensive investigation, and numerous things may escape the player’s notice for a long time due to their burial within seldom-used parts of the menus. Once commands are understood, carrying them out becomes simple enough, but this learning process is unavoidable.

There must have been no learning curve with these people, to look at the results before us.

Even after familiarity with the commands is achieved, dealing with the inventory will always require time. Since commerce is ruled primarily by bartering it makes sense that the player will have to pay close attention to the inventory available on both sides, but being limited to only three things at a time gets constraining. Gaining inventory in the first place demands extremely precise mouse navigation on a frequent basis, since many separate subjects of interaction are often jammed into a small area, in particular enemy corpses that had the poor grace to die in a big jumble.

Black Isle Studios could have chosen to use the 3D technology of the late ’90s in creating Fallout 2, but it erred on the side of sprites that did not tax the hardware of the time. While this means the game is hardly a sumptuous feature for the eyes today, aside from a limited color palette it is not eye-gougingly horrendous either. Many details in character animation are quite nice, and the brutality of some deaths is impressive even now.

Most of Fallout 2‘s music is atmospheric and mood-setting, not standing out by deliberate design. It is nevertheless effective at its intended task and complements the world design quite well. Little of the copious dialogue in the game is voiced, which is a shame considering performers like Michael Dorn and Jeffrey Jones don’t get to do very much, but good work is turned in by all concerned.

Some games manage to age without problems, being just as playable now as when they were originally released. Fallout 2 is not one of those games, but after I got through the clunky aspects of its presentation, it became hard to stop playing. Even though I frequently had to research something I wanted to do but couldn’t discern from the game itself, the gripping world presented here snared me and wouldn’t let go until I was done. That’s an impressive accomplishment for a title from any era.