Nothing Wasted in This Fable

Two Guild Heroes walk into the Bowerstone Bar. The Paladin says to the Avatar, “Have ya heard the one about the Orchard farmer who forgot where he left all his cows in the frozen Northern Waste?” The Avatar says, “Yeah, the Bard won’t shut up about it: it’s the fable about the lost chapped herds.”

Fable: The Lost Chapters is an extended version of the 2004 Xbox release, Fable. It’s not so much an expansion pack or sequel as a director’s cut, much in the same vein as Skies of Arcadia Legends. Fable TLC features more quests, more weapons, and more choices, but veterans of the original will find the world of Albion to be much the same beyond these additions. Lionhead tweaked the gameplay a little, but much of the actual experience will be similar, if not identical, to its earlier incarnation.

The story still follows the exploits of a young, unnamed — though not untitled — Hero as he seeks to unravel the mystery behind the harrowing events of his childhood. The Hero ages realistically throughout this adventure, but his age is merely a cosmetic device. 60-year-old Heroes may be shriveled prunes, but they’re shriveled prunes who can still decapitate bandits with a single arrow. Additionally, Fable TLC‘s main extra content occurs after the end of the original storyline, extending that storyline with several new quests to a logical conclusion. These new quests mostly take place in a brand new area whose beauty will not be wasted on anyone. 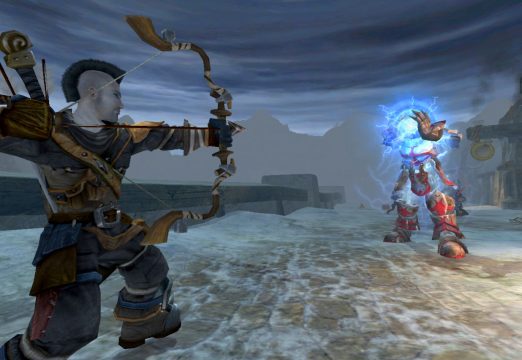 Fear the fierce arrows of the Mohawked Hero.

Fable TLC is an action RPG of the real-time persuasion. Heroes can draw upon three main skillsets to battle their foes: melee, ranged, and magical combat modes. Melee involves the swinging of various medieval weapons: swords, axes, hammers, etc in order to bash foes to the ground. While a simple and easy brute force solution, melee combat has the unfortunate side effect of leaving the Hero with nasty permanent scars — although some may actually like having claw marks on the face since it does lend a truly sinister look.

Those seeking the softer side of Fable TLC may opt to fire bows or crossbows. The damage level of bolts and arrows has been upped for this revision, making the choice of archer much more palatable. The PC is much more suited to the sniper-style zoom function, granting even more decapitations per fire than its Xbox counterpart. Finally, a player can opt to study the Will energies with a variety of support and attack spells, including a few new ones. Realistically, most Heroes will opt for some breadth across the skill spectrum while focusing on particular attack modus operandi.

Generally speaking, Fable TLC is a rather easy game. Healing and will potions are scattered liberally, and resurrection phials prevent death. When undertaking a quest, the Hero can opt to boast. Boasting is a way to increase the difficulty while gaining extra gold; common boasts are doing the quest naked or within a certain time frame. The usage of a combat multiplier also deepens the combat system; this multiplier, which directly affects the amount of experience gained, is increased for each successive hit on an enemy without the Hero being struck.

Experience comes in four types, three corresponding to the particular usage of a skillset: bashing an enemy grants strength experience, sticking a bolt through a foe’s heart nets skill experience, and calling upon dark forces to smite an adversary nets will experience. Each of these types of experience can be used exclusively to increase parameters within its own skillset. Additionally, the Hero earns general experience upon the death of the creature in question, which can be used for any of the skillsets.

The main attraction of Fable TLC remains the depth of the environment. Albion is a living, breathing continent full of interesting characters and places to explore. Part of the new content lies in fleshing out an already voluptuous immersion experience. Exploration will yield a few new Guild quests in addition to more interaction with townsfolk in need of assistance. A few minor areas have been added; the Darkwood Bordello is a place filled with a variety of women who will… relax a stressed Hero.

Those Heroes not wishing to engage in extra-marital relations can marry most any woman they meet, provided that the Hero is attractive, a homeowner, and will shower her with expensive gifts. Lionhead has gone the distance to make this process uncannily realistic. In a nod to Fable TLC‘s publisher, it’s much easier to marry someone if the Hero has a halo. 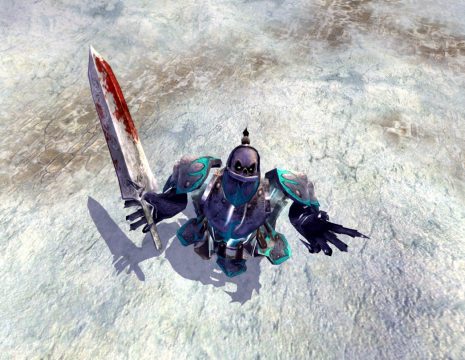 Halos are obtained by being good: killing bandits, helping sick children, and generally having mercy on one’s enemies. Conversely, slaughtering towns results in a shift toward the dark side. Moral points are assigned to most in-game actions so the Hero’s morality is constantly shifting, but a concentrated effort will result in a net gain for either end of the spectrum. While morality does affect the game, it is ultimately superficial, and most players will find it easy enough to switch between good and evil as necessary.

Visually, Fable TLC is an extraordinary achievement. Environments and characters are detailed with a deep realism; Albion seems to be chalk full of history that can be seen just by wandering around. Parts of the story are illustrated using well-drawn storyboard sequences, similar to stained-glass pictures in medieval cathedrals. The PC version has an added bonus of allowing player-created custom tattoos.

Aurally, the game renders appropriate tracks for atmospheric effects. Voice acting is superb with a variety of European accents cleverly inflecting unique characters. Ambient character interactions are often humorous (hire both a good and evil mercenary and then listen to them bicker), but this can backfire since the AI isn’t all that great. It’s not uncommon, for instance, to hear a guard say, “I’ve got your back” right before firing an arrow directly into your back.

Replay value will depend solely on how much a player enjoys the immersion experience. The main quest is short, even adding the “lost chapters” only clocks it up to around 12 hours. But, players who blaze through the storyline without stopping to smell the pungent aroma of a medieval world will ultimately miss the point of Fable TLC. The game is meant to be a giant sandbox full of opportunities to explore. Trying to probe all the depths of the game will easily double the hours spent.

Ultimately, Fable TLC comes recommended in general and as a superior game in comparison to the original release. Owners of Fable will probably not find enough differences to warrant a second purchase, but newcomers to the game should certainly check out Fable TLC.