Despite being someone who has been enjoying the plethora of small digital RPGs on the 3DS as of late, I shouldn’t have been surprised after reading Mike Moehnke’s review of Excave that the sequel wouldn’t be much better. I had hopes, considering I don’t mind playing short little gems on handhelds, but Excave II: Wizard of the Underworld is just plain bad. It’s really, really bad. Sequels that build off mechanics should be better, not worse.

Similar to the previous title, Excave II has players take on the role of a male or female adventurer who is in search of a way to stop the evil wizard of the underworld. Yeah, there’s not much to the plot. Even when there is narrative on screen, it’s telling the player in a long-winded way that they have completed the area, now move to the next one — the wizard will be there. What little plot exists is well translated, but is just adventure fodder with no substance.

Excave II builds from its predecessor, but not by much. There’s no leveling or stats mechanic, and the goal is still to get in and out of each dungeon, defeating a boss along the way. Weapons and magic stones deteriorate with usage and can only be restored to normal after a mission is completed or the player gets wiped out. Game overs offer two options: one is the player never did the run in the first place but doesn’t get to keep any items they may have fun in the dungeon run, and the second is to simply save and go back to Castle Town with whatever money and items were salvaged. This is, admittedly, a nice feature considering how unbalanced the areas are in this game, and it means not having to scrub one’s save if a mistake is made. 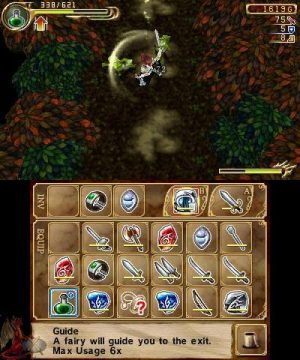 I can fight with a sword! …Maybe.

The main goal within Excave II is running through dungeons and collecting as much treasure as possible. Problem is, the limited inventory system is a pain to deal with in this game, and since there’s no pause feature, players will often be smothered with items they want to collect while trying to sort through what they wish to discard. This has to be done with the stylus, and it’s not as simple as it could be. Plus, in a lot of situations players will need to have murdered all the enemies before they can even collect a new item, and in a lot of cases, there’s too many of them to deal with at once. Considering half the game is played with the stylus and the other with the face buttons, it makes trying to multitask a real nightmare. Truthfully, having no pause option is just cruel and unusual punishment, because swapping between the stylus and the face buttons feels so unnatural, and often it has to be done quickly thanks to how fast items weaken.

Worse is the fact that weapons are gender-based. Females can only use daggers, short swords, bows, and rods, while the male can use spears, broad swords, and axes. This aspect shouldn’t be as bad as it is, but in playing through the game as a male, I had far too many instances where I would end up with weapons I couldn’t equip, because they were for the female character only, and vice versa would happen often if I played the female character. It’s nice to be able to switch which gender one wishes to play as, but then the weapons need to drop consistently for the gender being played as or allow it so any weapon can be equipped regardless of gender.

The challenge level in Excave II is a mess. There’s no consistency in the levels, meaning some are a breeze to power through, while in others players have to hope and pray they will get a better item drop so they can plow through it. Or players could just try and buy as many magic orbs as possible to make things even easier. The true issue lies in the fact that the treasure received is randomized, and sometimes in a higher ranking dungeon, players will still end up with a large amount of vendor trash. Furthermore, the combat is “smack the dudes, use some magic, may be an item, repeat.” There’s no depth, nothing to really encourage players to want to explore the dungeons. There also isn’t a lot of variety in the dungeons; even when a simple puzzle is thrown in, the objective is still to get to the end. 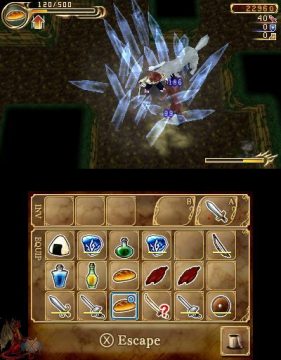 It’s boring and uninspired. In fact, even the tunes and visuals fit that slogan. Not only is Excave II unpleasant to look at, but it does nothing to not be a palette-swapping, cookie-cutter game. There’s nothing notable or interesting to speak of, and the same can be said about the music, which is forgettable all the same. The main campaign can be completed in ten hours, but why spend the money for a game that lacks any sense of variety? The game boasts over fifty unique missions, but frankly more missions and content doesn’t always make a better game.

At the ten dollar price tag, Excave II is highway robbery. There’s just nothing here for RPGamers that they haven’t seen and/or experienced in a better form. There’s nothing to keep players invested even after the first few hours because the game shows its hand so quickly and expects the players simply enjoy what little substance is there. For a sequel that should have improved on its predecessor, Excave II is embarrassing, offering little to no reward for the player’s time and money. Excave II‘s best asset is being able to view the ending from the title screen. There are tons of fantastic dungeon crawling experiences out there, and Excave II isn’t one of them.