Read This Review or I WILL KILL YOU!

For some reason, in the past ten years or so, a fascination with evil and evil deeds has emerged in the video game world. Whether you’re setting off nukes in Fallout 3, murdering flocks of sheep in Overlord, or engaging in gangland violence in Grand Theft Auto, there’s no room in today’s world for the virtuous heroes of olde. EvilQuest is a game on the Xbox Live Indie Games service that attempts to get in on the evil fad, but unfortunately it fails miserably.

EvilQuest tells the story of Galvis, a flat, one-dimensional evil lord whose attempts at conquering the world end in betrayal and imprisonment. He escapes from prison due to the incredible (and unbelievable) incompetence of his jailers, and decides that to get revenge for his imprisonment, conquering the world is no longer enough. He has to destroy it. So he sets out to find the mythical Chaos Axe, which will allow him to visit the Astral Plane to kill God. I really wish I were making this up. 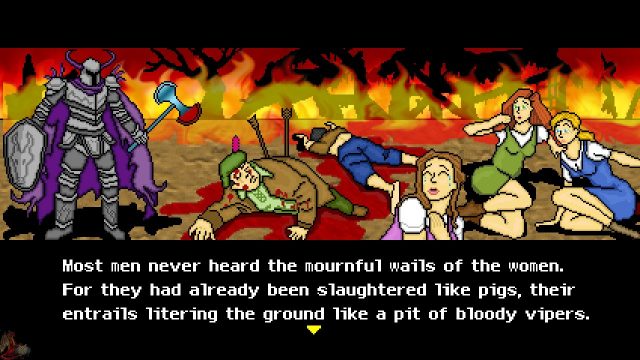 You’re trying too hard. Lighten up a bit.

The problem with EvilQuest is that in attempting to create a story whose protagonist is a villain, developer Chaosoft failed to realize what made other, similar games so successful. It’s completely lacking the black comedy and sense of irony that worked so well in Overlord, or to put it up against its peers, Cthulhu Saves the World. Galvis has no personality aside from being a complete and total jerk, and his motivations are nonsensical and silly. Instead of appearing as a menacing and dangerous evil overlord, he comes off as a petulant child throwing a tantrum. Ironically, if the game had actually run with this, it could have been a very humorous game. But since it was unintentional, the entire story comes off as meaningless and needlessly violent. It doesn’t help that the dialogue is poorly written and childish to begin with.

The gameplay isn’t much better, but sadly that’s not for a lack of trying. The basic mechanics are actually quite strong, and bear a resemblance to the classic SNES action-adventure Illusion of Gaia. Galvis can attack enemies with his equipped weapon, and can even charge it to launch a ranged attack. He also has access to a wide variety of elemental spells, each of which has a unique animation and range of effect, creating an interesting method of dealing with multiple enemies.

EvilQuest‘s gameplay problems stem not from mechanics, but from balance. To be more specific, a lack thereof. Nothing about the game has been balanced properly. Enemies have too many hit points. Spells cost way too many magic points. Magic points regenerate too slowly. Enemies hit too hard. Stats scale too slowly. It feels as though EvilQuest wasn’t playtested at all. In order to make it through the game’s final dungeon and beat its four-phase final bosses, I needed to go through ninety-five of the strongest potions that can be purchased in the game. That is quite frankly ridiculous. 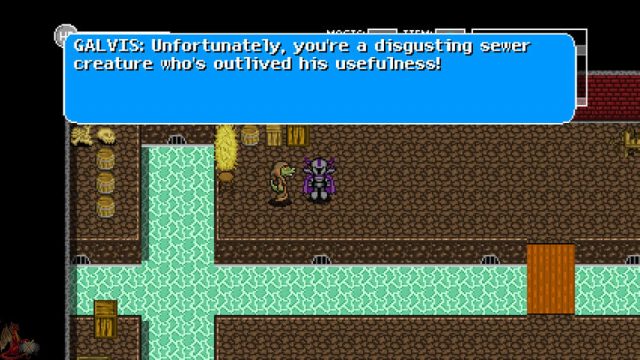 How can anyone take this guy seriously?

Level design causes more problems, particularly in the final dungeon. There are areas that are too large and areas with too many enemies. The final dungeon decides to throw together all these problems, and even has a portal maze, just in case players weren’t frustrated enough. At that stage in the game, players will likely be dodging and running past more enemies than they bother to kill.

On a positive note, the boss battles are terrific. They’re all massive and varied, although almost all of them have a bit too much health, leading to some prolonged fights. The spritework in the game is excellent, particularly among bosses, enemies, and attack effects. The background visuals tend to get a bit repetitive, but it’s solid all around. The soundtrack is also quite good, featuring bombastic, bass-heavy tunes that suit the game’s evil overlord theme quite well.

Overall, EvilQuest stands as an example to other indie devs out there: balance-test your games! With a better writer and some time spent tweaking the numbers, EvilQuest could have easily stood back to back against many of the better indie RPGs on the XBLIG service. With a solid three to four hours of game time for just a dollar, it’s a good value too. Unfortunately, in its current state, it’s just not enjoyable at all.