Reach for the Stars

Everreach: Project Eden is a sci-fi third-person shooter RPG from small studio Elder Games currently available on PC via Steam as well as Xbox One, with a PlayStation 4 release planned for 2020. Unlike many efforts from smaller studios, it aims to bring a realistic approach to its visuals. Unfortunately that realistic sheen very quickly disappears and, alongside shooting gameplay that lacks any oomph, it results in a title that fails to provide anything worthy of note.

Players take control of Nora Harwood, a member of Everreach’s Security Division while the company oversees a colonisation effort on the planet Eden. She is sent to investigate a supposed mutiny from a coloniser faction and ends up being shot down while en route to her point of contact. After a quick tutorial section, she reaches the outpost of Nova, where she is given the necessary leads to follow.

After reaching the outpost, Nora is sent on three distinct missions, which see her heading to a different part of the planet to explore large zones, taking out any enemies she finds along the way. There is nothing that can be considered an actual antagonist, other than the nameless grunts and robots scattered across Nora’s missions. There ends up being an interesting sci-fi theme at play in the ending, but this rather comes out of nowhere. Most of the shallow story is run-of-the-mill and the events are entirely forgettable, but the writing is at least decent enough and helped by respectable voice acting, with Nora’s floating spherical companion 73-Q interjecting enjoyable, if highly predictable, robot humour. A few conversational choices pop up that can impact the fate of a particular character, but don’t add much more than quick binary selections. 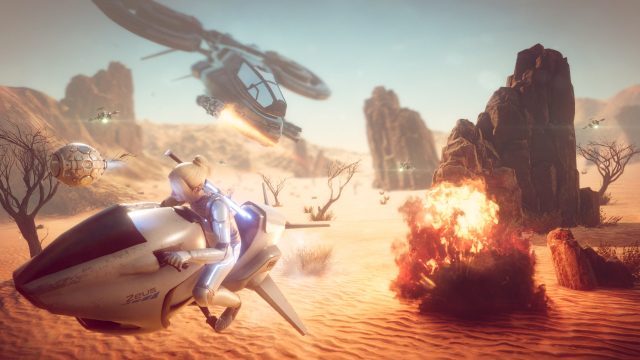 Hoverbike versus gunship is a recurring “battle”.

The biggest problem with the shooting gameplay is the abysmal level of audio-visual feedback. Nora has access to two weapons that can be switched on the fly, an automatic rifle and a pistol, and plentiful ammo can be found from enemies or loot crates scattered around the maps. But unless players are right next to their target, it’s very difficult to tell when shots are landing, missing, or being blocked by one of the many pieces of environment that impact a much wider range than is actually shown. Damage indicators are present, but they also aren’t anywhere near as helpful as they could be. The enemy AI is gormless, as opponents will only go for the player if they get within a certain visual range or are shot at, even if the buddy standing right next to them has just been killed. Some further action is added in sections featuring a hoverbike, but the handling and physics are far too twitchy to make these sections enjoyable.

The zones are more spread out and wider than they really needed to be, resulting in unnecessary time spent wandering the nooks and crannies on the edges to find chests that provide important upgrade resources. Some of these chests will also come with annoying mini-games to unlock them, such as drawing a single line connecting all the nodes or dodging falling blocks, with the thirty-second time limit on the former adding an unnecessarily punishing level of difficulty, especially considering that the rewards are much the same as one would get from regular chests. There is use to be gained from collecting the materials, however, as they are used for a substantial upgrade tree, one of the few elements that feel sufficiently fleshed out. 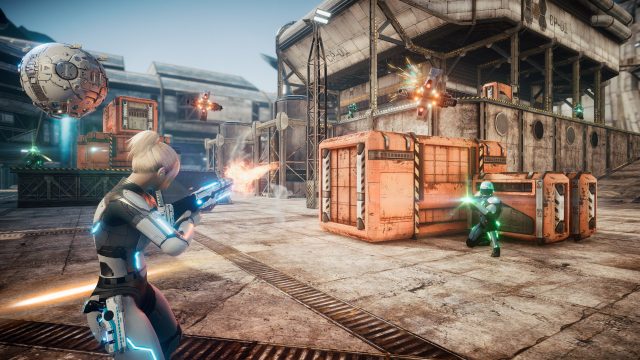 For a third-person shooter, Everreach makes it bizarrely hard to tell where one is shooting.

The camera positioning and angle during event scenes is often bizarre and it distractingly rocks around along with the current focused character’s movements. There are some interesting elements to the environments as alien plants and colony structures combine well enough will the natural hills on the base level. But aside from looking pretty, each zone fails to provide much of interest, and different open areas in each mission blend together very quickly without any landmarks worthy of note. Though the sound effects do a very poor job conveying Everreach’s combat, the music at least provides a decent, if unmemorable, backing to the vistas and action.

Everreach: Project Eden somehow manages to avoid being as annoying to play as its constituent parts would indicate, and there will be some out there who can get a decent evening or two’s entertainment from it. The game at least flows along quickly and the writing just about holds interest through the six or so hours it takes to see everything on offer. But this papering over fails to deal with the major underlying cracks, and it remains one that is impossible to actively recommend.