It’s a Long Way to the Top

There have been several entries in the Etrian Odyssey series since the fourth game, but none constituted a wholly new title in the usual style. Etrian Odyssey V: Beyond the Myth has appeared to finally fill that gap, and it demonstrates that the series continues to satiate the desires of those who seek a substantive dungeon crawler. The developed narrative of the Untold games is gone and the completely different type of gameplay found in Etrian Mystery Dungeon is also nowhere to be found. Instead it simply provides a new game with complex dungeon levels and meaningful methods of exploring the many stratum to be found within, which is all that I needed to be absorbed for a great deal of time.

Etrian V is structurally similar to previous games in the series, finding a group of player-created characters traversing the many layers of a dungeon. Each floor of the dungeon manages to have a unique feel, with different obstacles and twists for the player to figure out. Using the 3DS touch screen, the player is expected to chart progress along each floor, a cartographic task that is quick and addictive. Plenty of icons are provided to assist in the mapping endeavor, letting the player pick and choose whatever seems most appropriate. Shortcuts and points of interest will be found by the attentive, and keeping an eye out for such things is necessary for anyone expecting to get very far. Doing so is also quite entertaining, letting the detail and effort that went into this careful dungeon construction be savored.

Random adversaries and visible ones called FOEs will interrupt exploration, and they are engaged via turn-based combat. The options on offer for fighting are not revolutionary, but they do demand the player’s attention when building up character attributes. Simply grinding for levels is ineffective when the combat abilities unlocked are far more important for survival. Characters get a point for abilities with each level but most abilities take five or ten points to master, and it is far more effective to master a few skills instead of possessing many at the lowest efficacy. Revamping a character’s build takes away a couple of levels, but is otherwise a simple process. Combat is fundamentally similar to prior Etrian games, but it worked before and continues to do exactly what is necessary in this one with efficiency.

Differences from prior games in the series are small but significant. Multiple species for player character choices now exist, and the race abilities unique to these groupings are necessary for a variety of events to elapse while traversing the labyrinth. Some of these race abilities include a higher rate of surprising the enemy, or detecting various things in the surroundings, or increasing the storage space for items. The presence of food is something new to the series — while it cannot be consumed in battle, tasty dishes amount to recovery items that occupy a separate inventory and are freely obtained in the course of exploration. A few areas in the labyrinth where day to night transitions actually matter are also a noteworthy addition. These new aspects don’t revamp anything about the series but do make the game distinctive from its forbears. 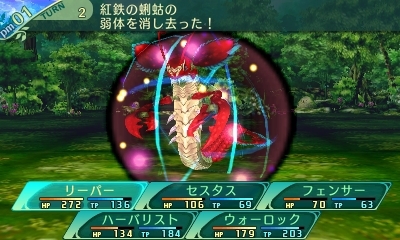 When a crawfish has its own VR bubble, don’t disturb it!

The race-specific abilities help alleviate a longstanding series issue with inventory space being restricted, which matters because the freshly severed pieces of enemies are sold in town to make new items. Etrian V still finds the player with overflowing inventory after a little while in the labyrinth, but at least it’s an improvement. Otherwise the efficiency of menu options is pleasant to behold. All the tools necessary for progress are at the player’s fingertips without unnecessary layers of menu, and options can be shifted between at a brisk pace.

Etrian V does feel a bit less wide-ranging than the preceding games in the series, due to its taking place in a single labyrinth. No sailing or flying takes place to get between the various dungeons, which are all found in the tree of Yggdrasil. This lack of scope is a bit disappointing, but as the many parts of Yggdrasil are extremely well-designed the issue is minimal. Early levels of the dungeon don’t vary much from prior titles, but they are nevertheless entertaining to go through. What comes later is distinctive and engaging to experience, even by the standards of the rest of the series. Later parts of the dungeon only become more absorbing from that base of quality. Plenty of optional missions are provided with each new floor reached that give even more incentive to explore everything available.

Difficulty is certainly not lacking — enemies are prone to throwing out nasty status ailments that will rip an unprepared party apart. Party construction and the use of appropriate abilities is key to survival, especially in higher levels where opponents are prone to reacting viciously as their comrades are eliminated. FOEs have never been adversaries to casually engage when first encountered, and the nasty creatures found within this title do not alter that maxim. Dungeon crawlers certainly come in more vicious varieties than this title, but it is not for players who seek to plough through the game without consideration. Challenge seekers also have an extra stratum and some heretofore-inaccessible locations full of powerful adversaries to keep things going after the credits roll. 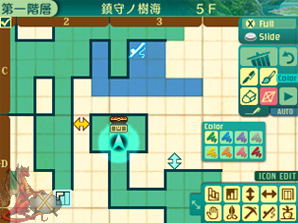 There is no neon pink option for ground color.  Hopefully this doesn’t bother anyone.

Unlike the pair of Etrian Untold titles, narrative mostly takes a back seat here. The player forms a new guild that begins to progress through the many levels of Yggdrasil, helping some NPCs along the way. The theme of adventuring through the unknown is the major driving force until the highest levels are reached, at which point the narrative intensifies a bit. Atlus’s localization is top-notch as usual, but this is not a game for anyone who needs a meaty plot. Fortunately, it never pretends to be narrative-centered.

A constant throughout the series has been Yuzo Koshiro’s excellent musical accompaniment, which continues here. Atmospheric dungeon themes are complemented by engaging combat tracks, with particular standouts being those for the major bosses. A few voices from NPCs appear in town, which are well-acted but sadly deficient of enough variety in what they actually say. As for the visuals, while this is not a title that will entice lovers of graphical pizzazz, the various locations and adversaries are effectively captured.

Etrian Odyssey V is very much what I expected it would be. That means it won’t appeal to anyone who has never been interested in this series, but it continues to showcase impressive dungeons and a rewarding sense of exploration. The series hasn’t lost its spark of well-realized inspiration, and that’s all many need to hear. It certainly managed to ensnare me for the entirety of the experience.