Playing Etrian Odyssey IV sated my appetite for first-person dungeon crawling only temporarily, and the quick arrival of Etrian Odyssey Untold: The Millennium Girl represented a good way for me to get another fix of the same sort. Millennium Girl indeed packs more of what addicted me to IV, but with enough variance to keep it from feeling like a clone. Never having played the original Etrian Odyssey, I can’t compare what happens in this game to it, but for anyone with even the slightest interest in the subject matter it’s an easy recommendation.

Events begin when a player-named highlander, who has been tasked with investigating a number of suspicious environmental changes emanating from the Etrian region, stumbles upon a cold sleep capsule. For 1000 years its occupant, a young woman named Frederica with some understandable memory fogging, has awaited the stimulus to reawaken. This pair is joined by a trio of adventurers from a different locale with the same goal of figuring out what ails the region, and the quintet determines to find out by delving deeper into the massive labyrinth next to Etria.

Untold makes a major break for the series by including distinct characters who speak, but it pays off because the writing is sound enough to make these individuals effective instead of annoying. They disrupt the dungeon exploration frequently to chat a bit, but most of the time what they have to say is entertaining enough to justify the break. The overall story trajectory is also intriguing and worth the experience, though it will not challenge the best-known writers of fiction today to up their games. Also included is a Classic mode that ditches the established personalities in favor of blank slates just like the earlier games in the series, which provides a welcome bit of variety for experiencing what Untold has to offer.

Most of the dungeon levels in Untold are placed within a single deep structure that drastically varies its topography every five floors, with excursions to an abandoned laboratory elsewhere that vary the place of operation. The developers did an excellent job of making each floor feel unique, ensuring that even if they look similar at a glance the experience of traipsing through them constantly throws out new things. Some of the more memorable locations include one with warp points everywhere, another with poisonous spots that are difficult to avoid, a floor with far more water than land to traverse, and one with a central boss guarded by FOEs along every avenue of approach. Even the floors without a dangerous aspect do a good job of introducing new things to ensure that the experience never becomes monotonous. 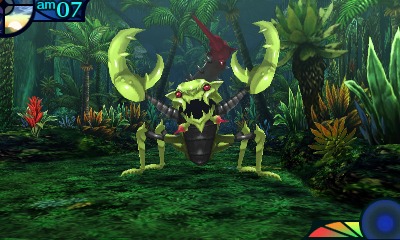 Most scorpions display an appalling lack of manners, but this variety is even ruder than usual.

While the game displays the area over which the party has walked, everything else in an Untold dungeon level needs to be manually added by the player on the touch screen. This process is essentially unchanged from IV but remains remarkably addictive, and the game supplies plenty of icons to allow accurate cartography while employing a little imagination. Untold introduces a very useful mechanic that allows instant transit between floor stairwells so long as a sufficient portion of the map is filled in, which cuts down on trips over the same ground.

Actual combat while navigating this expanse of dungeon floors is pretty standard stuff, with random turn-based skirmishes that don’t do much to distinguish themselves from myriad others over the years. Its brisk efficiency nevertheless keeps things interesting, and in the case of weak opponents, using the Auto function makes encounters end in just a few seconds. Etrian Odyssey‘s signature FOEs, hulking monsters that are visible on the map and pose significant threats, spice up the dungeon exploration. The difficulty of combat can be adjusted from the menu any time outside of battle, allowing players of many skill levels to try it.

The quintet of characters in the game’s story mode have set abilities, but the points that are gained with each level up for improving their skills will not be enough to learn everything, forcing some thought upon the player. They stick to their story classes for a long time, but with enough levels gained the player can switch things around. This is an inheritance from IV, and it serves the same function here of dropping characters down many levels with bonus skill points to increase their effectiveness. Just like IV, there is a level cap of seventy that can only be exceeded after the main story is complete, so circumventing it through a class change is the only way of making experience matter again. It provides an excellent means of trying out new classes in story mode however.

Grimoire stones provide an another means of altering characters, one that is much less permanent than class change. These stones are generated during combat and come with a widely varying number of abilities, sourced from those available to both protagonists and the enemy. While it takes a fair amount of time to do so, the player can strategically combine these stones to put a number of very useful abilities together. How and why these stones are created is left rather inscrutable, so patience is necessary to reap their potential.

Also just like IV, the inventory of Untold is limited to sixty items. Enemies drop body parts or other tangible things instead of money, which ensures this limit will be quickly reached. Many quests require gathering a certain number of items, forcing them to clog the constrained available space. An ability to gain money from items that are discarded can reduce the obnoxiousness of this, but it will still prompt plenty of additional trips to town. An item storage is available to somewhat mitigate the problem, but still requires going back to town and picking out the relatively few things that will not be immediately sold. 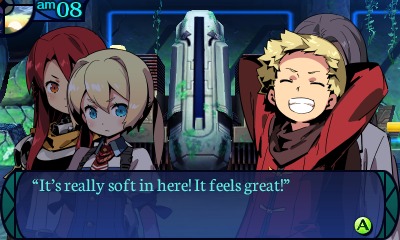 He looks rather young to say such things.

While a few brief FMV sequences are present, Etrian Untold is mostly about navigating dungeons in the first person with occasional trips back to town. It moves quickly and does an excellent job of varying the strata within the labyrinth, but a fair amount of repetition will occur when looking around. Some of the enemy designs were taken straight from IV, though this title does a better job of limiting the multitude of palette swapping in its predecessor.

Yuzo Koshiro turns in his usual superb musical accompaniment, though the twist here is that many of the compositions were already used in the original Etrian Odyssey, with the option of hearing the original versions or the new arrangements. Either way, Koshiro’s knack for composing effective melodies to accompany the action leads to a glorious audio experience. While their lines are limited in scope, the characters also chime in with short clips on a frequent basis, and do a good enough job not to become annoying.

Etrian Untold is a long game, probably encompassing sixty hours without delving into the many optional quests that appear along the way, but it stays engrossing throughout. I went into it expecting those things, and while the story didn’t floor me, it was nevertheless more interesting than I anticipated. The makers can hopefully keep the fantastic dungeon design seen here while tweaking the inventory system, since the Etrian Odyssey series has every chance of continuing in the future.