Etrian Mystery Dungeon was not prominent on my radar, but the good times I’ve had in the past with the Etrian Odyssey series made me prepared to sample the latest in its output. At first Mystery Dungeon seemed to be doing a solid job of translating the core tenets of Etrian games into a roguelike format, but the initially accommodating game starts to get infuriating before too long. Each dungeon is bigger than the last, and the method by which developers have forced the player to pay attention to DOEs outwears its welcome very soon. Perhaps hardcore roguelike lovers will lap this one up, but recommending it to anyone else is a difficult pitch.

A group of adventurers is introduced to the friendly inhabitants of a town called Aslarga that subsists on the fruit of its expeditions. The first few successful treks through dungeons are unremarkable, but soon enough truly dangerous creatures start to swarm out of these locations to menace the town. Stopping the encroaching creatures is doable, but they appear to be prehistoric beasts encased in amber, and ever-increasing numbers are appearing to menace the town. Finding their source and putting a stop to it is the preserve of the adventurers who first started uncovering them.

In the vein of Etrian Odyssey titles before the Untold installments, Mystery Dungeon features mute player characters and depends on NPCs to sustain a plot. The NPCs offered are pleasant individuals for the most part, and interacting with them is not a chore, but neither is it particularly interesting. The overall plot features some questionable science, but is not remarkable for any other reason.

It is possible to venture into the dungeons with a single character, but that number can go up to a maximum of four at the player’s discretion. The player assumes direct control of one character, with any others following along and acting as their AI dictates when enemies are around. Ten of Etrian Odyssey‘s classes are included here, and they allow for quite a variety of dungeon diving to take place given the vast arsenal of abilities each type can access. All the enemies encountered along the way will also be familiar from the 3DS Etrian Odyssey titles, making things look very nostalgic for series veterans. Character growth is also the same as core Etrian titles, with each level granting a point to put into whichever skill tree the player chooses. This title even keeps materials gathered from slain foes and the landscape in a separate part of the inventory to avoid crowding the usable item list, which would be a good thing for the main series to remember. 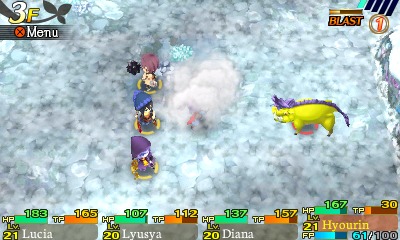 There are no dog party members, preventing any Old Yeller reenactments.

Progression through the dungeons goes according to the rules of roguelikes though, which means that what looks like an overhead action title at a glance operates on a turn-based system. Every level of the dungeons is randomly generated, which eliminates one of the core tenets of Etrian Odyssey and keeps any area from standing out due to a unique design. Enemies will randomly appear in the nondescript rooms, sometimes even in areas previously cleared, to menace the adventuring party. Foes in lower regions of dungeons are given a power boost to make them more intimidating, although their appearances do not change. Traps of numerous types will also appear with increasing frequency as the game proceeds, offering such unwelcome effects as summoning more monsters or teleporting characters elsewhere on the floor. Fatigue also plays a role, with characters growing increasingly hungry by taking steps through the dungeon, and great hunger translating into HP loss. These concepts are presented in workmanlike fashion for a roguelike, with the variety of methods that can be employed by the characters being the only major difference from the usual.

Most of the roguelike mechanics present are ameliorated by certain other aspects, such as tiles that replenish fatigue points and the ability to construct forts for a fee on distinct dungeon levels that allow shortcuts to and from that spot. Stronger forts can also be constructed that provide a map of the dungeon floors within a range, though the zones themselves are still randomly populated. Since later dungeons have more than twenty floors, not being forced to tackle the whole thing in one go is a kindness from the developers. Being beaten is not an automatic loss, since another team can be assembled from currently inactive characters as a rescue force to drag the unconscious bodies of the first group back to the surface. A defeat removes the current inventory and money, but as these can be stored in town there are no irreparable consequences.

Another Etrian Odyssey tenet is its dangerous antagonists that block the path, which are called DOEs in this game. The player can avoid these beasties by being on different dungeon floors, but that is no solution when they must be stopped from reaching the top of the dungeon. At that point the DOE will be bested by the combined might of everyone in town, but if this happens it counts as a defeat and the player’s team will be ejected from the dungeon. Fighting these creatures is thus the better course of action, but the only way to deal more than one point of damage is to inflict multiple status ailments on the enemy, and since these expire after a few turns handling such opponents demands careful attention. Battling them from within a fort is the best method, because an extra team of four can be assigned to manning the construction and will pitch in to assist during a DOE encounter. Losing will still make it retreat, but at the cost of the fort and the funds that went into it. Removing the DOE menace requires killing all comers with forts in place until no more arrive, which is a time-consuming but sometimes necessary step to take.

Related to the challenge of taking down a DOE is the AI of other characters. The only time the player has direct control of all party members is when fighting the boss at a dungeon’s bottom: while there are a few ways to grant it in other circumstances, the ability lasts just a few turns. Formation plans will go out the window when characters do something stupid, and they routinely squander their mana pool on things the player would not have chosen. Even worse is when fighting something in a corridor, where characters will routinely stand around doing nothing while only the fighter adjacent to the enemy pitches in. There is also the occasional instance where the group gets separated by a few spaces, and party members start wandering the dungeon according to a plan known only to the AI. Healers are good about coming to the rescue, but counting on the AI to do anything offensive is a crapshoot. 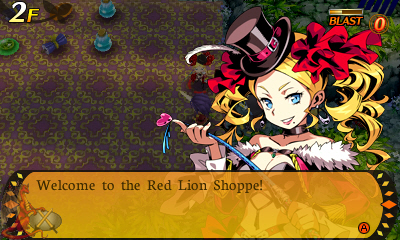 Do you ever change your outfit, miss store operator? That doesn’t seem very good for adventuring.

Beelining through the central storyline could probably be done in twenty hours or less, if a host of good luck came one’s way. Without extraordinary good fortune somewhere around forty hours is a more realistic timeframe for completion, and the game has a number of optional dungeons and side quests to offer further enticement. The difficulty one will experience reaching the finish is highly variable due to the random placement of many aspects, though the deepest parts of dungeons tend to sport a lot of enemies that hit very hard.

Enemy designs all came from the earlier 3DS Etrian Odyssey titles, and are well rendered as small figures in an overhead view. There aren’t all that many though, and seeing the same opponents for over twenty floors is unimpressive. The dungeons themselves look pretty much the same throughout as well, though some shadows are added to the bottom floors in an effort to make them look more menacing. The music is all pulled from earlier Etrian Odyssey titles, and remains captivating. The lack of anything new is a bit dismaying, though the remix of a boss tune from Etrian Odyssey IV in the seventh dungeon is superb.

Roguelike mechanics are not a turn-on for me in most instances, and after finishing this I fervently hope not to deal with trap-laden dungeons again for a very long time. It’s some kind of testament to Etrian Mystery that I was able to finish it, but not without many irrational bursts of rage at its mechanics. What I liked owed nothing to roguelike structure, so true fans of that game type may derive much more enjoyment. I would prefer the Etrian series to cross with something else the next time it has a spinoff.