When I first heard of Eithéa, it was as one of a set of titles a fellow staffer had asked me about. There wasn’t much information about this game on our site or on the English internet, so when I found a copy in the bargain bin I went for it. For good and for bad, it has been an interesting experience. Eithéa was published by Atlus, but developed by a group called TamTam, whose main forte up to this point seems to have been adventure-genre and visual novel spinoffs of anime titles. This is readily apparent when one plays the game.

The story begins as the hero, Shou Nimi, and his friends say goodbye to a classmate who’s about to change schools. Suddenly, the world turns upside down and five students and their teacher find that they’re now stuck in another world, Eithéa. Supported by the power of its sacred trees, Eithéa’s history is one of conflict, as the nature-loving Moonlight clan butts heads with the technologically gifted Fire Dragon clan. A third clan, the Night Dreamers, stays hidden in the deep forests. While the scenario shows promise at the outset, it soon descends into a quagmire of late-’90s anime clichés. The only other male playable character besides Shou appears for just one level, making this very much a harem title. The two other male students caught up in the transfer aren’t even seen for most of the game. The plot scenes vary from predictable to contrived, and the bad guys get betrayed by their own side so many times that it ceases to be a twist at all.

Unfortunately, Eithéa is a very plot-focused title. There is no deviation from the storyline to be had. Even the geography of the game is subordinated to this, with the main continent of Eithéa resembling a giant horseshoe. The story starts at one end, works its way around the bend in the middle, begins the climax at the other end, and comes around full circle for the finale. All movement between points on the map is dictated by the story, only occasionally allowing the player to backtrack to a town to rest and resupply. Forgetting to stock up on healing items just once can lead to regrets for a great while after, as enemies rarely drop enough items to take up the slack. 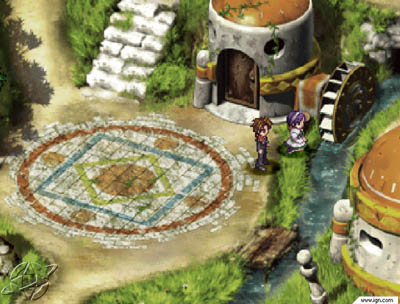 Just as annoying is the pacing. The game will often treat the player to long periods of exposition, which wouldn’t be half so bad if it weren’t for the near-ubiquitous voice acting. Ninety-five percent or more of the dialogue in this game is voiced, and it’s not always possible to cancel it once someone has started speaking. Even when canceled, it may take a few seconds for the game to stop talking and get on with it. Add this to the finicky nature of accepting or declining choices (B button won’t cancel; A button must be used to manually close a choice box), and it’s possible to be forced to listen to the same minute or so of dialogue a few times over because of a mis-timed button press.

That is not to say that the overall quality of the voice acting is bad. In fact it is very well acted throughout, though one or two characters are just plain annoying no matter how high the quality is. It’s just that the very presence of all the voice acting slows the pace of the narrative sections immensely, and the game’s presentation is not nearly dynamic enough to make up for that.

Credit should be given to the graphics department. The game environments show a great deal of detail and the spritework, both for major characters and NPCs, is quite expressive. The artwork — character portraits and scene-specific splash pages — is the handiwork of Aoi Nanase, best known for her work in such series as Seraphim Call and Angel/Dust. Her work on Eithéa provides the game with perhaps its most attractive feature, and the game would appeal to any of her fans just for that.

Combat is more of a mixed bag. The system rests on two pillars, the first of which is formation. In battle, the player’s choice of positioning and direction determines which enemies are within range of a character’s attacks. All but two playable characters in the game use projectile attacks (and one of those two is a temporary party member), so that range can be fairly limited. One might even call it artificially limited, as at times it really makes no sense how a target could be just out of the targeting cone, when all a character would have to do is turn her head three degrees to the left. In one level late in the game where the party is limited to three characters, it’s even possible to have a situation where one enemy is in a sweet spot which cannot be targeted by anyone in any formation. Formations can be changed in mid-battle at the cost of letting the enemy have one round of free hits. The party starts the battle in whatever formation and direction it was in at the end of the last battle, though the player can take the time to change it in the menu. No matter how everyone is set up, it is still a crapshoot to determine if the enemy will even be in a good position to be attacked. Very often the player will have to let everyone take damage just to get them into a fighting position. 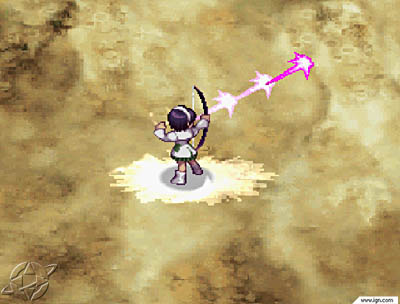 Battles are plagued by a score of other minor issues. Character HP isn’t visible at the start of a round, but instead only when attacks are being selected. If one is using the auto-battle feature to speed things up (a must-do since generic battles are generally one-button affairs), then one might not realize that a character is near death until it’s too late. Even with auto-battle, slow attack animations mean that combat always takes longer than it should.

The other pillar of the battle system is TIP. These strange silver or gold balls are dropped by enemies and are absolutely necessary for battle. Projectile weapons need them to operate, and as said before five out of seven playable characters shoot enemies from a distance. The game’s magical artifacts, the Artia, require TIP in order to create usable magic spells. Thankfully, the game is more generous with TIP than it is with item drops, so bottlenecks tend more often to be caused by the monetary cost of acquiring new Artia spell combinations instead of raw materials. Spelled TIP comes in many varieties, but it’s rarely evident, or even logical, which element is mapped to which weapon type. Also, spells must be crafted from TIP and Artia outside of battle, though thankfully this can be done at any time, and not just at save points or towns.

The final thing to mention about combat is the Latent Ability Voltage system, or LAV. The game may try to convince the player that LAV is all one needs, but ultimately it plays second fiddle to the more important parts of the battle system. LAV is a measure of the trust each of the (female) party members has in Shou, translated into a sort of force-field which reduces the damage of attacks passing through it. Getting knocked out in battle makes a character’s LAV drop, and the only real way of raising it is to participate in conversations. These little chats always occur in the middle of dungeons, and never have any impact on the story, though they might foreshadow upcoming plot points. If Shou is presented with a choice of responses, the only difference is if the girl’s LAV rises or falls — and 99% of the time the first choice is the best. 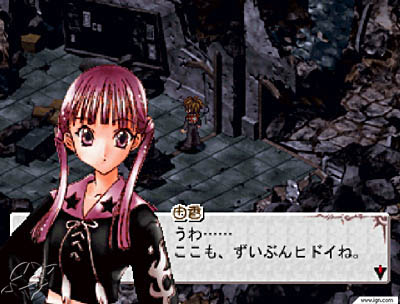 Yuka always has something to say…

Menus and choice boxes are simply annoying to navigate in this game. Often in order to exit a store or Q&A session, a specific choice must be selected, and as mentioned before the B button rarely works as a means of canceling boxes. Item menus are a bit better ordered but just as an example, when an item is used the menu reverts to the first item on the list, not what had just been selected. If one wants to use more than one of the same item at a time, it’s necessary to scroll all the way through the item list to find it again each time.

Even with the mandatory voice acting, the slow-paced battle system, and the need to stop and chat every few minutes in dungeons, Eithéa is not a very long game. It could conceivably be finished in twenty-five hours. The only reason for it to exist on two discs is the sheer bulk of the voice acting.

Eithéa is a title that starts out well, but suffers from its strong focus on a plot that is simply not enough to carry it through. Its strict linearity gives the player no chance to really explore or get a sense of the setting. There is the possibility of multiple endings, one for each heroine, but as I would have to play through the game all over again just to see them, I cannot say that I find this prospect exciting. In the end, it’s a pretty title with a nice soundtrack and some good acting, but that doesn’t manage to make it a good game.