Drakengard never really seemed to receive that much attention until the developer, Cavia, crafted the unique, one-off Nier in 2010. With Nier, Cavia branched out to try a lot of creative ideas that on paper shouldn’t have worked. Combat was uninspired, the graphics were less than stellar, and the game’s mechanics were all taken piecemeal from other games and crammed into a single package. Thanks to the story, wonderful writing, and fantastic soundtrack, it just worked. I say all that to let you know that if you’re coming into Drakengard 3 expecting another Nier, you are going to be sorely disappointed. It has many problems, but not being Nier isn’t the issue.

Cavia’s latest features the intriguing tale of Zero, an angry, vulgar woman on a mission to kill her five sisters. On this quest, Zero and her young dragon companion Mikhail are joined by an odd group of sexually deviant male disciples who fight alongside them. In many ways, most of the character development for this group is built through party banter during combat. It’s shown that Zero is impatient, aggressive, and is easily irritated with the naive Mikhail. The disciples are also an odd bunch. One of them is a sex-crazed maniac who constantly talks about his manhood and carnal pleasure with another who is a masochist seeking sexual release through pain and punishment. Zero and her sisters are all Intoners, goddess-like figures with strong sexual urges, and how the sisters are represented in this manner is yet another interesting point. One sister is a virgin who represses her desires while another is very overt with her sexuality.

The entire game is very sexual, and thanks to some fantastic writing it is handled very well. All of the characters and their interactions help to give the game some much needed personality and is a highlight if you’re not too opposed to discussion of sexual content. Very little is held back in terms of language, sexual themes, or violence. There are even a few times when certain vulgar dialogue is bleeped out or a violent scene is censored as part of the developer’s artistic vision, which is hilarious because the game is not truly censored, so you can tell it was added to help add depth and personality. 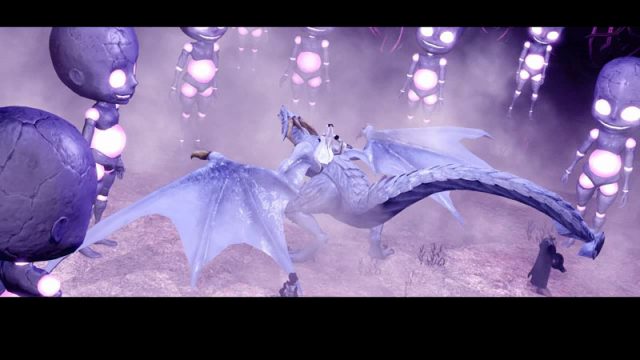 While the characters and their dialogue are great, the game’s plot is obfuscated by Zero’s unexplained desire to kill her sisters. While things become somewhat clearer in some of the game’s ending branches, it never really has a strong enough impact to make much of a difference. The story jumps from one point to the next with little to drive it forward, which is a shame since the characters have some great moments within these segments, but without stronger cohesion in the narrative, it just feels off.

Drakengard 3‘s battle system is another aspect of the game that has some solid components, but still doesn’t feel quite complete. Combat is pretty straightforward, with Zero able to hack up enemies using four different types of weapons which can be used to perform combos and swapped around at any time. There are also sections where Zero flies around on the back of Mikhail in Panzer Dragoon-style battles. Zero also has an Intoner mode she can enter upon filling up a meter by defeating enemies. In this mode, she becomes an unstoppable force that can quickly mow down a group of foes in no time. These all add up to an engaging combat system, but there are some serious technical issues that drag things down.

Most offensive is the slowdown that takes place when things get too chaotic in battle. If there is too much going on, which often happens as players are bombarded with tons of enemies at a time, things start to grind to a halt. This is made even more problematic by the camera jumping all over the place when Zero is near the edge of an area. So when trying to dodge enemy attacks or cannon fire, the game will often work against you. Add to all this that the AI of your party members is pretty awful at times, with characters running into walls you were not even around for no reason, and the decent combat system is brought down a few notches.

Even when things are working properly, the game is a little one note in terms of gameplay. Drakengard 3 is divided up into missions with almost every mission consisting of moving down a solitary corridor while being assaulted by wave after wave of recycled enemies. There is very little in terms of exploration or any other interactions with the environments. Each area offers only three treasure chests to find, and the tons of materials collected in each stage are simply cashed in at the end of the mission. Boss fights are where things get more lively, as these challenging battles are each completely unique, unlike the mid-bosses and swarms of enemies throughout the rest of the game. They help put a tasty cherry on top of an otherwise flavorless sundae. 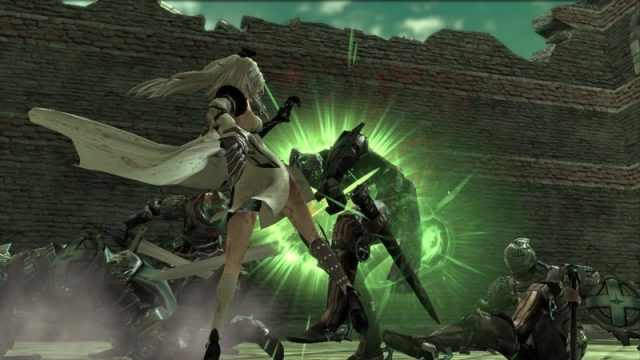 Zero will kick you and you will like it.

Zero’s progression is based on how many enemies she defeats during a stage. When leveling up, she receives health increases, though the real upgrades in power come from purchasing or finding new weapons and upgrading them. In order to earn money for these enhancements, players can repeat stages or complete requests from a mysterious character known as Accord, who rewards Zero with money and experience for completing these tasks. Being able to repeat these quests and redo prior stages is helpful if players want to obtain all of the weapons in the game, which is recommended in order to see all of the game’s content.

Much like Nier before it, Drakengard 3 offers appealing character designs, but only serviceable graphics to back it up. Enemies are reused way too often and areas tend to be bland and uninteresting. Though what this title lacks in visual prowess, it makes up for with its soundtrack. The juxtaposition of lovely piano music alongside metal and even dubstep might seem out of place anywhere else, but is a perfect fit within Drakengard 3. The extremely varied collection of music is used appropriately throughout the game and is further complimented by the excellent voice cast, all of whom give fantastic performances.

Overall, I enjoyed much of my time with Drakengard 3, but I couldn’t help think that it could have been improved in many ways. The boss fights, writing and character dialogue, music, and art design are all great. Unfortunately, the repetitive combat in bland, empty areas is often too tedious, especially when plagued with camera issues, weak AI, and graphical slowdown. If you are willing to look past these issues, there is fun to be had here, but the problems are hard to ignore.