Kemco’s reputation is not one to inspire great confidence, but as with LJN in days past it is simply a publisher. Most of what it publishes gives off strong warning signals to anyone looking for quality, but Exe-Create’s Dragon Sinker at least attempts some interesting things. The game is clearly constructed in the mold of 8-bit titles, yet it features some aspects and ideas that keep it from worthless clone status. Dragon Sinker does not succeed in being a particularly good title, but the extra effort that went into certain areas is appreciable.

Dragon Sinker initially appears to be a very short game, as its lead protagonist is spearheading an assault against the feared dragon Wyrmvarg in the opening scene. Wyrmvarg is feared for a reason however, and Prince Abram’s assault ends in failure. Rather than give up and allow sacrifices to the dragon to persist, Abram sets out to obtain the three legendary weapons that were used a century prior to defeat this foe. Doing so will require him to mend broken fences between his human brethren and the elves and dwarves of the world, as each legendary weapon was taken up by a different race in the previous confrontation.

Some intriguing notions are presented in the narrative that are then not addressed. Rather than go into any depth with the racial tension and relations between humans, elves and dwarves, these concepts are declared and then left alone. The elf and dwarf characters quickly introduced do nothing to enhance the world, unless an elf princess slowly becoming attracted to the human prince despite an unpleasant early relationship counts as development. There is one unexpected beat in the story near its conclusion, but for the most part this narrative is very much in keeping with its 8-bit inspirations. Aside from the sidekick of each lead, all other characters who join the party have absolutely nothing to say after joining up, which can make the constantly expanding roster feel rather empty at times. 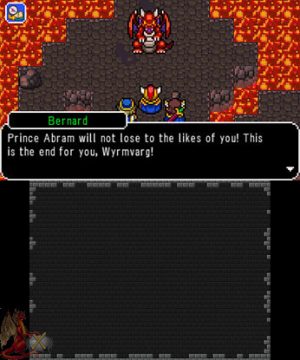 Combat basics are the same random, turn-based affairs as those seen in umpteen other titles. Something different comes in the form of numerous abilities that consume HP instead of MP for use, which can add an interesting wrinkle to combat. Far more interesting is the team aspect, through which the human, elf and dwarf protagonists each head three other characters. The protagonists cannot be in the same party, but are free to pick from the myriad other characters for their backup. Each team can be instantly switched out for another in the field with a single button press, or in battle at the beginning of a turn. Doing this allows the player to take advantage of character aptitudes with great efficiency, and allows a good method of introducing a little variety into the action.

An important element in combat is the class system of Dragon Sinker, which affords opportunities to tailor the companions to the situation. The three party leaders cannot change class, but learn powerful moves no one else can. Their retinue of additional party members can switch to new classes in town, most of which are made available by completing short side quests for NPCs that subsequently join and bequeath a new occupation to the available options. Characters cannot mix and match the battle abilities from various classes, but the multitude of options broadens combat prospects considerably, including an incredibly useful method of instantly summoning a random battle that provides double the normal benefits to facilitate fast grinding.

Interface aspects of Dragon Sinker are both pleasant and aggravating. Welcome abilities include a press of the R button letting the party be completely healed through magic spells, and a handy reminder of what the current main and optional quests are. Other aspects are less pleasant, with a prominent issue being the need to wade through the menu to use a specific item every time the player wishes to warp elsewhere on the map. The menus force players to scroll through them at length due to their lack of convenient shortcuts, and in battle one is expected to remember what enemies what enemy strengths and weaknesses are because the game does not. 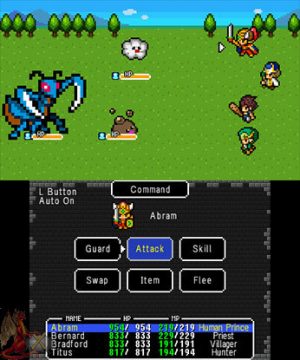 Oddly enough, no one ever remarks on the GIANT DEADLY MANTISES that are wandering around just outside town.

Enemies are usually manageable in combat, while the areas with powerful opponents are clearly marked as such. A characteristic of battle is that surprised participants take double damage, which means that a party taken unaware will be in for great pain. What makes the game’s difficulty highly variable is its lottery system, stemming from cards given out by shopkeepers when buying things. Getting lucky in the lottery can net incredibly strong equipment that trivializes opponents, and renders thought during a fight unnecessary. Taking down the strongest optional adversaries will require a great deal of grinding even so, but the entire game can easily be completed in ten hours if the side content is left undone.

Dragon Sinker is visibly emulating the look of 8-bit titles, and successfully achieves its ambition to seem as though the Game Boy Color could have handled it without a problem. The sprites have a fair number of animations, but everything is pixelated and environments look the same in different areas of the game world. Its world is workmanlike but not particularly interesting to view. The same sentiment can be applied to the score and sound effects, which definitely succeed in their aural aspiration to sound like the platforms of past decades. While not unpleasant, the audio fails to deliver much in the way of memorable material.

It doesn’t pass muster as one of the 3DS’s better offerings, but neither did I experience great hatred for Dragon Sinker while playing it. It offers enough engagement to not fade from the mind swiftly, without justifying someone’s immediate and unswerving attention due to the plethora of superior options out there. Saying it’s better than most items published by Kemco may not be great praise, but it’s accurate.