In addition to having an incredible quality track record among RPGamers, BioWare also has another strength: among RPG developers, they have one of the fastest turn-around rates for producing new games, particularly in the last few years. Since Mass Effect was released in 2007, BioWare has consistently put out at least one title per year: Sonic Chronicles in 2008, Dragon Age: Origins in 2009, Mass Effect 2 in 2010, and a myriad of small, downloadable games in between. This year, however, BioWare is set to put out not just one, but three full-fledged releases. While The Old Republic and Mass Effect 3 are slated for later in the year, Dragon Age II is the first out the door, and it’s also the game with the shortest development time — just over one year. While BioWare has done a fantastic job exploring and expanding upon the world created in Dragon Age: Origins, the quick turnaround leaves the whole thing feeling a bit less polished than its predecessor.

Dragon Age: Origins allowed players to begin the game from any number of different origins, ultimately becoming a Grey Warden and savior of Ferelden, but Dragon Age II takes a decidedly different approach. In Dragon Age II, the player takes on the (fully voiced) role of Hawke, a Ferelden refugee who escapes the destruction of Lothering along with his mother, brother or sister, and a guard named Aveline. The group makes their way to the city of Kirkwall, a port on the border of the Free Marches to the north of Ferelden. Hawke’s tale is a much more personal one than the nameless protagonist of Origins received, and the entire story is told by his silver-tongued friend Varric, a dwarf with a flair for dramatic embellishment. As a result, it’s never clear exactly how much of the story is fact and how much is poetic license.

Hawke’s story takes place in three parts, each one exploring a different realm of Dragon Age lore and explaining Hawke’s rise to the Champion of Kirkwall in bits and pieces. Eventually, as the various plot threads intertwine, it all comes together to paint the entire picture. The first act, which portrays his arrival in the city, examines the city itself and the politics and events currently transpiring within its walls. While this act is by far the longest, it’s also the most disjointed. Hawke is tasked with collecting enough gold to finance an expedition into the Deep Roads, and as a result the tasks he performs to this end feel disconnected and irrelevant, even though their importance becomes apparent later on. The pacing in this early part of the game is quite poor, and will likely turn many players off. The second and third acts are much better, with the former examining the Qunari and their unique philosophy in depth, and the latter exploring the struggle between mages and templars. The entire game concludes with an earth-shattering event that changes the world forever. Despite the poor pacing in the early game, the story is exciting and engaging, filled with memorable characters, powerful moments, and excruciatingly tough choices that transcend anything BioWare has done before. 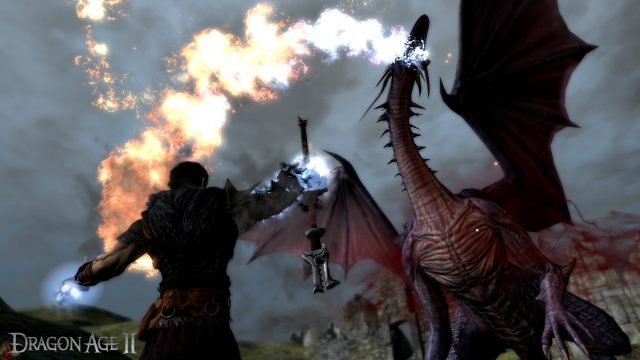 Living up to its title.

With that in mind, the story is simultaneously disappointing in its inability to keep the game’s lore straight. Inconsistencies run rampant throughout, whether it be the cast’s odd ability to overlook Hawke using forbidden blood magic or enemy mages teleporting around the battlefield willy nilly, despite a codex entry that says specifically that teleportation is the one thing mages have never managed to do. Most of these can be written off as mechanical incongruities, places where lore needs to take a backseat to gameplay, but more picky gamers will certainly notice and take exception to these instances.

Speaking of mechanics, Dragon Age II has taken large steps forward in making the game not only more accessible to a mainstream audience, but also more enjoyable. The combat system, which was clunky and relatively bland in the console version of Dragon Age: Origins, has been streamlined and sped up, creating a fast-paced action RPG that still maintains a large amount of tactical depth. Players can choose from three classes: rogue, warrior, or mage, and each class has several potential playstyles, all of which are engaging and fun. In particular, rogues and warriors have been thoroughly differentiated from one another, with the former now only capable of using bows or daggers and the latter able to use two-handed weapons or sword-and-shield combinations. Coupled with a wide array of new active abilities, Dragon Age II is simply much more fun to play than its predecessor.

Unfortunately, other gameplay elements have fallen to the wayside. The entire game takes place in the areas in and around the city of Kirkwall, and there are an extraordinary number of recycled environments. It’s not even just a matter of the game taking place in a limited area: sections of the game such as caves or buildings that are completely separate still make use of the same models, just with different doors locked off and treasure placed in different spots.

Dragon Age II has also implemented a new version of the dialogue wheel seen in the Mass Effect series. While it functions simply enough, the game now provides symbols next to each option that let the player know the tone of the response. Theater masks signify a humorous response, a clenched fist marks an angry one, an olive branch accompanies a kind response, and there are several others that appear in various situations. The practical upshot of this is that it’s much easier to determine how Hawke will phrase his responses than in other BioWare games, and in particular, it’s easier to tell when Hawke will get flirtatious, preventing the player from getting involved in unwanted romances. 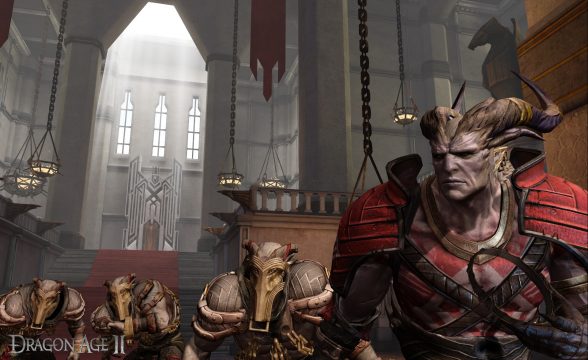 The Qunari received a makeover for Dragon Age 2.

Speaking of flirtation, Dragon Age II takes in-game romances to a new level. For the first time, every character is a potential romantic partner, regardless of a player’s gender or sexual preference. While it might seem strange to think of every character in the game as bisexual, it manages to work for the most part, as aside from one instance, Hawke is always the instigator. The one exception tends to come on a little strong, particularly in one situation where the only dialogue options available are either flirtation or outright rejection (which he does not take particularly well).

Progression has also improved in Dragon Age II. For every level gained, each character receives a talent point and three attribute points to spend. Hawke has three specializations that he can choose from for each class at level seven and fourteen, while all ally characters have a single, unique talent tree they can put points into, making use of skills not even available to Hawke. Certain talents can also be upgraded, improving their strength or adding additional effects. Hawke will also discover crafting materials hidden throughout the world, and each time one is found, it becomes permanently available to use for creating poisons, potions, grenades, and runes for enhancing equipment. Particularly rare ingredients are often guarded by dangerous foes. New recipes will also be discovered as the game progresses and can even be purchased from vendors.

Visually, the game is a noticeable improvement over Dragon Age: Origins. The style tends to forego realism in favor of a more animated feel, and the world’s different races are now much more distinct from one another. Elves are thinner and taller than Origins, and the Qunari now have large horns protruding from their foreheads and grayer skin. Unfortunately, the needless bloodletting of Origins has also returned, and is worse than ever. While the blood-splatter effects on characters aren’t as pronounced, the excessively brutal way enemies die simply seems unnecessary for a game focused on roleplaying. The audio is also quite good, featuring terrific voice acting and a suitably epic score.

Although Dragon Age II is a step forward in most ways, the recycled level design makes it clear that BioWare really didn’t have a lot of time to polish the game up properly. Ultimately, how much one enjoys the game will likely rely on their ability to overlook this transgression and certain issues with the story. Beyond that, Dragon Age II is another example of what BioWare does best, and it’s definitely not a game to pass up.