Demon’s Souls is easily one of the most addictive and engaging games I’ve ever played. Something about this title drew me in and just would not let me leave it alone. It is a very brutal game that leaves little to no room for carelessness, but since players will never see a Game Over screen it is actually very forgiving. The game expects you to die and teaches you to embrace it. Patience is a virtue, and Demon’s Souls will drill that lesson into the head of haphazard gamers. If you take your time and learn from your mistakes, then you should enjoy Demon’s Souls every bit as much as I did.

The story of Demon’s Souls is focused less on narrative and more around atmosphere. After a quick introductory stage, the player’s character is killed and awakens dead in the Nexus, a place that serves as a hub for the world of Boletaria. It turns out that an ancient evil has been brought forth and the kingdom has been invaded by demons. Many brave warriors have attempted to rid the land of this evil, but all wound up dead and trapped after failing. Instead of just pushing one through a linear story, players are encouraged to explore the world, and in doing so will encounter both good and evil while battling floods of vicious demons. So while the narrative might not be the major focus, Demon’s Souls does a fantastic job of making players really feel as if they are trapped inside this cruel world.

Demon’s Souls is all about gameplay. Players will spend the vast majority of the game fighting through punishing stages full of demons, decay, and death. For the most part, this is a straightforward action RPG in terms of control; enemies attack and the player must battle these hordes off with swords and sorcery. Stages are broken up into sections, each ending with a boss fight. After defeating the major demon at the end, players can then warp between this newly created shortcut and the Nexus. This helps since gamers are tossed back to the start of the current section when killed. Even considering how often players will be restarting stages, a single playthrough can be completed between twenty and forty hours, though this can easily be extended by those looking to do everything or those diving into the vast new game plus mode. 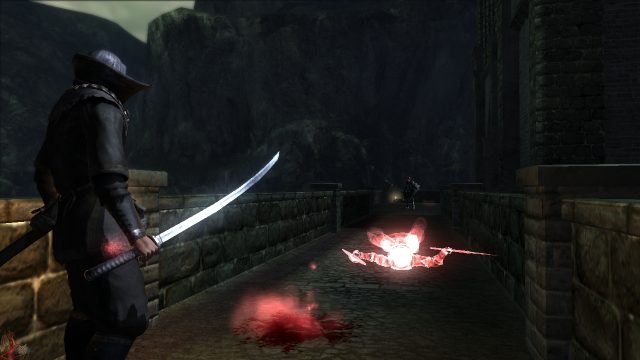 Character creation and development is deep. The process includes lots of options for both male and female characters, and the models can be made to look rather appealing or completely hideous. Aesthetics aside, players are offered one of ten starting classes with each leaning toward either magic, melee, or ranged combat, but are not tied to a specific area. As characters level, one point may be placed into a single stat, each modifying multiple aspects of the character. So while a character might start as one class, it can be easy to shift focus to another area of specialization. Each style of play offers a unique experience, with different bonuses and challenges for each. Those who enjoy jumping into the fray can focus on melee while those who wish to keep out of the heat of combat can use magic or ranged weapons. While players are not limited even within their character’s build, areas which have not been focused on will not be as effective. Regardless, all players will need to learn to dodge and avoid attacks, as enemies are damaging and able to kill with only a few hits.

One area where the game really differs from other RPGs is that characters can exist in one of two forms: physical and soul form. In physical form characters have a full health bar and can summon other willing players into their world to assist. This may seem like a good thing, but it makes the player easier for enemies to spot, as well as opening up the game for aggressive individuals to invade and attack. Physical form is the rarer of the two modes, as there are only a few ways to obtain this form. Players will return to physical form (or revive) by defeating a boss, by helping another player beat a boss via soul form, from invading another player’s world and killing them, or by use of a rare item. This form is enhanced, a bonus mode of sorts, as it does make progressing easier.

The soul form is how players will spend most of their time. In this form characters make no sound when moving, so enemies will not hear them as easily. Also, player worlds cannot be invaded in this form, so those afraid of being accosted by others should simply stay dead. However, as a soul, players can join other players to help them progress, and are able to invade other worlds. Players can also leave messages on the ground that will transcend worlds, so that others may be warned of upcoming dangers. Adding to the creative online functionality is a boss that will gather characters in soul form to battle other players. Regardless of the form, the game can be completed in either and having this seamless (yet optional) online play adds a wholly new element to gameplay. Being able to offer assistance has rewards and for players having a tough time progressing through a stage, they have an option for help.

What is even more unusual about Demon’s Souls is how death is handled. In most RPGs, death means that the game is over and the gamer has to restart from the last save. Well, that is not the case here. Death happens often, but the game is fairly forgiving about it. Players will lose all souls (the game’s combined method for handling experience and money) that were gathered, but those are not lost forever. The player will have to start over and will return to soul form if he died in physical form, but the souls can be recovered with no penalty if the spot where death occurred can be reached. Also, all items found will always be kept after dying, so this is a means of never actually losing progress. Making things even more manageable, certain stages feature shortcuts that can be unlocked to cut down on retracing of steps. All enemies will revive on each visit, with the exception of bosses, so having these shortcuts is very helpful. That aside, Demon’s Souls will likely be very frustrating to gamers with little patience or those who do not learn from their mistakes. The game leaves little room for foolishness, but those who pay attention should learn why they died and how to succeed on the next attempt.

Boss battles in Demon’s Souls are worth all the pain and suffering it takes to reach them. Entering the fog to epic fanfare and facing off against a staggeringly huge monster is something that will have most gamers’ blood pumping. All bosses have patterns, and finding the right way to counter these takes strategy in addition to skill. Some boss battles are more like puzzles than one-on-one combat, so many will take a few tries to find the right method for success. Little in the game is more satisfying than taking down one of these massive behemoths. 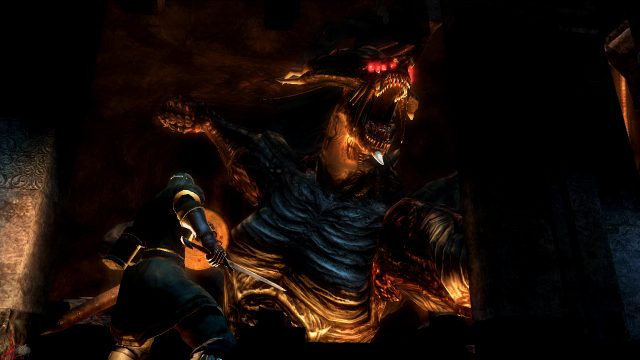 Most dangerous puzzle ever.

Demon’s Souls has a lot of content cloaked beneath the surface, and the most obscure is World Tendency. Simply put, the game changes based on whether the player is following a good moral path (white tendency) or an evil path (black tendency). If the player kills an evil NPC or boss, it will make the World Tendency more white, unlocking new areas and making enemies weaker. Killing off a good NPC or dying in physical form will corrupt the world and push it toward darkness. This also unlocks new areas and NPCs, but will make the enemies stronger and lower character HP. Each of the game’s five areas has its own specific World Tendency, so changing one does not affect the other. A Character Tendency that is dependent upon interaction with the good and evil NPCs also exists. Certain items will modify stats based on Character Tendency. It is a critical element of gameplay for those seeking to explore the game fully. Character Tendency is constantly active in the background adding a nice layer of depth, especially when playing a new game plus, but can be brushed aside for more casual playthroughs.

Presentation is another area that really stands out for Demon’s Souls. The game’s visuals are wonderful. Player characters can be made to look beautiful (or ugly), though the enemy designs are the most impressive, especially bosses. These huge bosses are the game’s greatest asset, as not only are they challenging, but they look great and are accompanied with epic music. The game features no music throughout any of the five major areas, leaving only the sounds of combat to linger. Soft background music is heard in the Nexus, but unique, gorgeous music accompanies each boss. While not having music during the majority of a stage might seem detrimental, it actually adds to the atmosphere when the grand composition begins as a boss is engaged after minutes of quiet. This helps to highlight boss fights and makes them even more memorable.

Demon’s Souls is an amazing game. It is a challenging experience and completing it is immensely satisfying. The game is not frustratingly hard or unforgiving if care is taken, but it can be brutal to those who want to jump in and blaze through it without much thought. Even for those with patience, it can still be a rough introduction, but it is not without reward. Players will need to try some stages over and over until they learn the right method to complete them, but the retention of items after death and the abiltiy to retrieve lost souls make things more manageable. Of course it is frustrating to die a second time while trying to make it back to a large collection of souls, but losing them forever is not the end of the world. With careful management and slow but steady progression, Demon’s Souls is a grand experience. I highly recommend that people cast aside their fears of it being too difficult and give it a chance, as it’s not just for hardcore gamers. It is an amazing game, and I hope to see Demon’s Souls 2 get a greenlight soon.