Finding a good RPG Maker game can be a challenging task. There’s a huge overflow of them, and wading through the flood often isn’t worth the effort if people keep making the same generic “ye olde 32-bit style” game. I’ve played my fair share of these games, and I can’t stress how hard it is to find an RPG Maker game that isn’t ripping off the older Fantasy Fantasy or Dragon Quest schtick. While Deadly Sin 2: Shining Faith fits the mold of “ye olde 32-bit style” experience, this game’s attempts to balance old and new ideas of the RPG genre means it has a lot of merit.

The story follows Carrion Iblis, an Imperial soldier haunted by the memories of his late father. Alongside him is his smooth-talking companion Maric, they are tasked by Prince Siegfried with the recovery of his sister, Ruby, who has gone missing on her own accord. After recovering the Princess, they become entangled within a deep political plot involving a religious cult called the Lucid Dawn that seeks the resurrection of the deity Saint Durai. However, Prince Siegfried discovers the intentions of Lucid Dawn, and intends to usher in an apocalypse that will allow him to claim Saint Durai’s power. Tortured and neglected, Siegfried wishes to cleanse the world, and reclaim the former glory of his decaying royal line.

One thing that makes Deadly Sin 2 stand out is its mature cast of characters, each with a personal struggle with which to grapple. They are strong-willed, but not to the point of unbelievability. Their characterization helps shape the overall dialogue and story of the game, which is sharply written with an added touch of humor, which is a nice chance of pace from the seriousness of the plot. The characters are very likable, and it’s easy to want to see them be successful in their journey. Siegfried is a great villain, and one who really gives the story a lot of life. Although the plot seems like something that has been done to death, there’s a freshness within the writing and characters that makes the story irresistible. 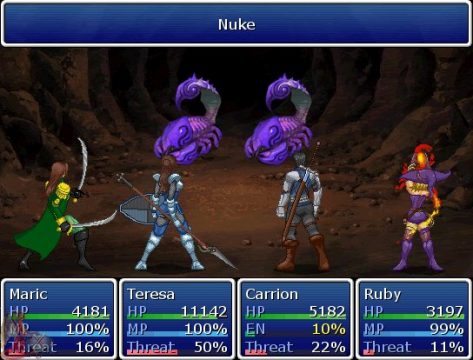 Something else that’s irresistible is the game’s graphics. While they look like any other 32-bit style RPG, there’s a great amount of detail within the creation of the sprites, each of which is excellently individualized. There’s so much colour and variety within the game’s world, that it is a joy to move from place to place. While the sprite-based graphics outside combat don’t push any boundaries, the same can’t be said for the battle graphics. Each protagonist has a unique full-length model and battle animations, which is quite a treat. It feels like there was a lot of love put into making each character look unique, which is a shame considering almost every villain, with the exception of Siegfried, is stock from RPG Maker VX, just with the odd platte swap. Having more variety within the enemies definitely could have made combat more enjoyable, but the lack of it unfortunately creates a stale battle atmosphere.

Combat in Deadly Sin 2 is a typical turn-based affair, with some nice additional touches. Each character has a set class, but can be customized through skill points. Skill points are obtained through leveling up, completing quests and side missions, and finding monster nodes which grant the ability to turn off encounters within the dungeon. Carrion, and each member of his crew, has nine active skills and three passive ones which can be developed as a means of customization. Characters come with a good variety of buff and debuff skills which are a necessity to use in combat, as they are extremely effective. The higher the skill, the better chance characters have to inflict enemies with status effects, which is often the best way to clean house. The fact that status aliments are actually useful gives the combat a lot of character.

Another addition to note is the threat meter. This increases as character attack, and increases more as critical hits are landed. The threat meter’s usefulness stems from it allowing the player to anticipate who will be attacked each turn. There are consequences from a high threat meter, however, such as the enemy having an increased critical hit potential, or even the power to inflict instant death. Combat is a mostly speedy experience, although during the game’s later areas, battles will take slightly longer and also become much more frequent. The pacing during most of Deadly Sin 2 is mostly commendable, sans the final area, where moderation is promptly thrown out the window. The home stretch of Deadly Sin 2 dumps a room full of bosses, three additional dungeons, a brand-new stretch of overworld, then one more dungeon into the player’s face, eliminating the fine flow it had established before. Still, despite that one long slog of an area, the rest of the game provides a serviceable challenge, and doesn’t outstay its welcome. 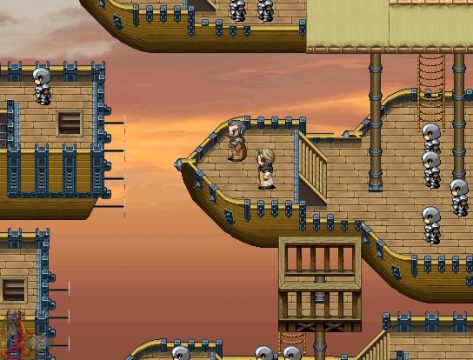 A standout feature in Deadly Sin 2 is its best part, the musical score. The soundtrack is beyond impressive for an RPG Maker effort, providing over twenty standout tracks. Not only is it pleasant to the ears, but the use of various instruments enhances the game’s plot points, adding to the overall atmosphere. The use of drums and violins gives this soundtrack a lot of strength and confidence, adding many layers that make it enjoyable to listen to.

Deadly Sin 2 is not a long engagement, as the game can be easily completed in less than twelve hours, though the plentiful side quests have the potential to bump it closer to twenty hours. The difficultly can also be adjusted on the fly, which is a nice touch if battles get too difficult or just aren’t challenging enough.

RPG Maker games seem to get a bad reputation from the mainstream RPG community, and it’s understandable considering that there are so many of them out there trying to recreate the best parts of 16- and 32-bit games from earlier generations While Deadly Sin 2 has its faults, they feel far more minor in comparison to what other RPG Maker games do, making it a treat to play, and providing a nice bite-sized RPG experience, with the exception of the final areas. For those who are weary of testing out an RPG Maker game, this one is definitely worth checking out and certainly should not be missed.