Brief Rage Against the Machine

Following its release of Fantasy Hero late in 2014, Arc System Works has localised another relatively inexpensive downloadable title for the PlayStation Vita in the form of Damascus Gear: Operation Tokyo. An action RPG that combines mission-based mecha titles like Armored Core with the isometric, loot-heavy gameplay of Diablo and its ilk, Damascus Gear is an enjoyable experience while it lasts. The ten hours that it takes to complete nearly everything on offer and lack of any multiplayer options means that its staying power is almost non-existent, but there’s a solid foundation to build on if the creators so desire.

Set in the year 2097, fifty years after a fourth World War, the game quickly introduces players to its mechanics by sending them through a couple of training missions before they join the team hoping to take back Tokyo from the berserk biped mechanised units, called RAGE, that wiped out eighty percent of humanity in two weeks. Humanity is hoping to use its own mecha, which are known as GEAR and have not been affected by the grand AI rebellion, to try and fight back while protecting the remnants of the population hiding underground.

The controls are simple and easy to get the hang of. Although button mashing is pretty much the name of the game, there’s a bit more nuance than going hell for leather all the time, particularly on the later missions. Short dashes are done with the X button, while triangle and square operate the two weapons attached to each of the mecha’s arms. Circle is reserved for a special shoulder-mounted weapon, while the left and right shoulder buttons provide healing and prolonged dashing respectively. Each weapon has an energy bar, preventing it from being used indefinitely before a break for automatic recharge. Although players will be on the offensive most of the time, paying attention to where and what enemies are doing is important as it is otherwise easy to fall victim to a powerful attack. Despite not being the deepest system around, the combat is highly enjoyable, and the satisfaction of taking out both the smaller enemies in numerous amounts at a time plus the occasional tougher opponents remains high throughout. 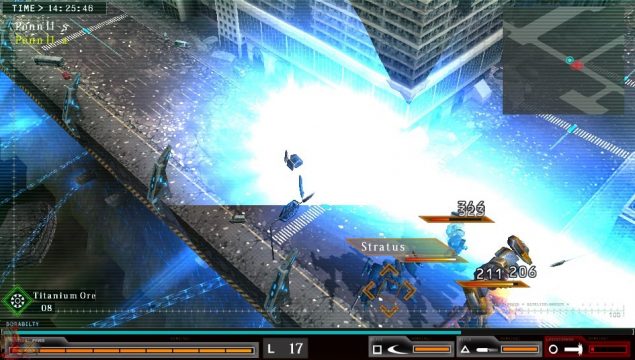 Of course there are oversized laser beams.

Missions are nicely varied in terms of their objectives, which include defeating a high number of RAGE, surviving a certain amount of time, eliminating specific enemies, and protecting an ally. Players shouldn’t have too much trouble getting through the majority of them, although there are a few towards the end where the difficulty noticeably increases. NPCs will often join in on missions, although their usefulness is debatable and they have a habit of getting destroyed mid-way through. Mission length feels nicely balanced throughout the game: most will take around five to ten minutes, while the longest can weigh in at around twenty. There is a time limit that comes into play on some occasions, but is arbitrary more often than not. The only problem is the apparent lack of any optional content once the game is complete, barring some DLC missions. The single-player only aspect is also a slight downer as Damascus Gear is very much the sort of game that would be easily translated into multiplayer.

There’s plenty of customisation potential for players’ GEAR, with numerous types of melee and ranged weaponry available for the three weapon slots plus five slots for armour for players to mix and match and colour as they wish. Many enemies will drop loot, so players will want to return to the dock screen to examine the spoils of war for possible upgrades. Although parts will share the same name and base stats, passive bonuses can vary greatly between them, so even ones that initially appear to be duplicates are worth checking over. Players can expect to undertake a wholesale replacement of their loadout every five to ten missions, with significant upgrades occuring in that time. There is a shop, but the equipment it offers is never any better than that found on the battlefield and so it only really needs visiting to stock up on heals. The customisation helps break up the mission structure a bit, and is implemented well enough so that players do not get trapped in menus for longer than necessary.

Although nothing particularly impressive on the technical font, the game’s visuals are none too shabby. The location designs do a nice job of taking into account the isometric camera and the effects and UI give a good sense what’s going on with minimal issues. Some disappointment comes in a lack of real difference in the enemy types, which also features some palette-swapping, and the limited number of locations within the game: Damascus Gear‘s Tokyo is made up of just five small connected districts, in which the vast majority of missions take place. The font used in the game is also not ideal, and can be a bit difficult to read due to some poor kerning. Sound effects are good and don’t ever become grating, and the same can be said for the music. There is no voice acting in game, which is to be expected for the budget this title looks to have received, and there’s nothing to suggest that its inclusion would have added anything in any case. 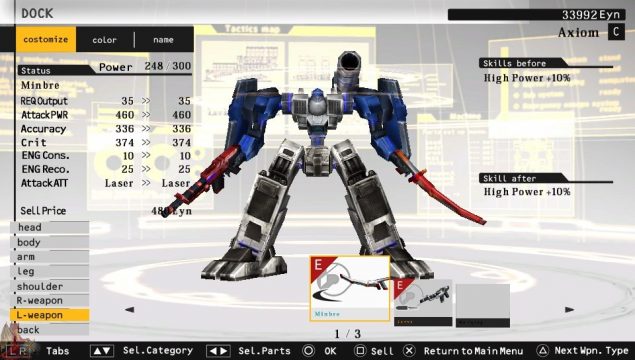 Yes, you can colour it red. No, that won’t help.

On the story front, Damascus Gear moves from one mission to the next well enough but doesn’t do anything noteworthy in the process. There aren’t any major twists and turns, but the game is able to suggest the fluid situation of the ongoing battle against the RAGE. The uncommunicative nature of the opposing side means there’s no real character or particular examination of the enemies, but the player’s team gets enough charactisation to keep the battle for Tokyo engaging enough. There’s some minor character development, but it’s clear that deep storytelling wasn’t the top priority of the developers. That said, it’s an area that has clear potential to be significantly improved if desired, with what appears to be a solid premise to build upon. The localisation of the game is perfectly fine, with no noticeable problems outside of the aforementioned font choice.

Although it’s easy to see Damascus Gear being quickly forgotten, it feels like that would be a shame if it were to go out on this single note. It provides a very enjoyable, if short, experience and offers the potential base for a good series if Arc System Works wants to take it to the next level. Add more meat in terms of content, as well as more effort in the storytelling in a way the company has done excellently outside of the RPG space, and I can see this being a series I would get excited for.