When Life Gives You Lemon Peels

Sometimes a game is content with merely being average, and Crimson Gem Saga embraces the most basic tenets of the genre with open arms, happily resting on the laurels of what came before. But as it shows, innovative gameplay isn’t always necessary when a top-notch presentation, great game balance, and terrific localization can lift it to new heights. Thanks to some clever, satirical writing, Atlus has managed to produce a simple, enjoyable experience that should satisfy anyone looking for a solid PSP RPG.

The game begins on the hero Killian’s last day of Chevalier school, shortly before his graduation ceremony. Killian has a highly competitive, over-achieving spirit, and is devastated when he learns that he’s been beaten out for valedictorian by a rival classmate. This small bit of bad luck is only the beginning, as it launches a series of events that will see him robbed, beaten half to death, arrested, blackmailed, nearly executed, and ultimately thrown into a ludicrous adventure that takes pride in its absurdity. It’s unlikely anyone will develop any kind of emotional investment in the game and its characters, but they are nonetheless a well-assembled band with nicely conflicting personalities that keep the game amusing, if nothing else. Coupled with dozens of well-placed bits of zany humor and pop-culture references sure to delight the geek inside all of us, the actual quality of the plot itself, a fairly trite fantasy story, is completely irrelevant. In fact, its simplicity is probably one of its strongest points; by keeping things light and avoiding too much melodrama, it manages to accentuate the game’s charm rather than overpower it.

The light-hearted, quirky story is propped up by terrific art and sound direction. The visuals are a terrific blend of detailed 2D sprites and attractive 3D environments that even give Star Ocean: First Departure a run for its money. The sprites have a surprisingly wide array of animations for nearly every possible situation, as well as impressive battle animations for the many skills each character can learn. The environments, likewise, are highly detailed and easy to look at, though they tend to get a bit repetitive in dungeons. One minor issue is the presence of character portraits during cutscenes. These portraits, while attractive, tend to be rather obtrusive, taking up an unnecessary amount of screen space. Each character also only has a single portrait, which means they fail to convey the same gestures and expressions as the far superior sprites. The game probably would have been better off without them. As for the music, it’s both simple and catchy. Most songs aren’t likely to stick in your head for long, but they’re all pleasant and varied in style. Atlus also added a fair bit of voice acting to the game, which, while limited in scope, is of good quality, faltering only occasionally. 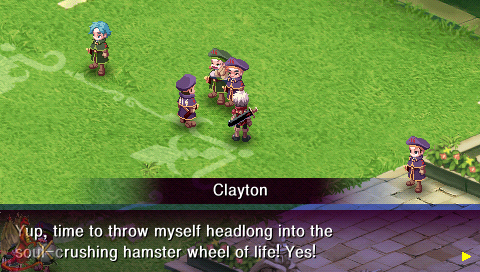 Life past school isn’t quite what Killian imagined it would be.

The majority of Crimson Gem Saga is spent engaged in combat, which, thankfully, is surprisingly enjoyable, despite being little more than a simple, turn-based battle system. Even regular enemies can be surprisingly powerful, and making use of every skill available is paramount to survival. Status ailments play a significant role in successfully mitigating enemy assaults, and healing is needed nearly every combat round. Despite the apparent difficulty this would suggest, Crimson Gem Saga is actually a fairly mild game. It provides an enjoyable, decent challenge without being overbearing, making it accessible to anyone with marginal experience in the genre.

Unlike a typical traditional RPG, Crimson Gem Saga has added a touch of the modern by eliminating random encounters. Enemy parties are instead visible on the dungeon map, and running into them begins a battle. If you can strike them before they spot you, an extra ambush attack is activated, dealing a decent amount of damage to all enemies. If the enemy does happen to see you, an exclamation mark appears over its head, during which time a normal battle can be started with no advantage on either side. If, however, the exclamation mark disappears and the enemy starts chasing you, the enemy will have the advantage at the start of battle, dealing an initial burst of damage to the party.

Each victorious battle awards skill points which can then be spent to learn new skills for each character, selected from an impressively large skill tree. Most of the skills are fairly pointless or situational, but every character has several extremely useful skills as well as several combination skills that can only be used when the required characters have sequential turns in battle. Most of these skills are incredibly powerful, and include abilities such as drastically reducing an enemy’s attack, defense, and critical hit chance, reducing an enemy’s HP by fifteen percent, and even becoming invincible for eight whole turns! Using a combination skill draws mana from all the participants, but only takes up the original user’s turn. 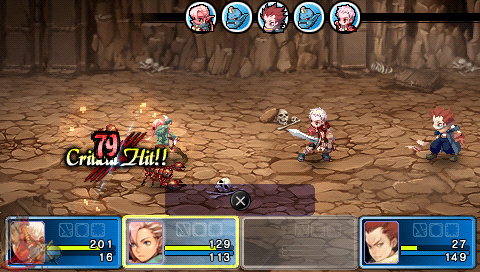 Hitting X after a critical attack can launch a follow-up assault.

Unfortunately, all skills, even the weakest ones, can be incredibly, even prohibitively costly. Most characters have extremely limited mana pools, and a lot of time has to be spent restoring mana, especially in boss battles. Luckily, restoring mana is not terribly difficult. Every time a character levels up, his HP and MP are both fully restored, and enemies throughout the game drop health and mana potions like they were candy bursting from a piñata.

Outside battle, exploring dungeons can sometimes be confusing, due to the lack of a map. A terrific map is available while out in the world and in towns, but unfortunately it cannot be accessed in dungeons, making it easy to get turned around. It should also be noted that new equipment tends to be excessively expensive, usually bankrupting the party just to equip the four active members. You can, however, save anywhere, which makes it a terrific portable RPG.

Crimson Gem Saga manages to be consistently fun and decently challenging throughout the majority of its 30-40 hour playtime, but things can get frustrating towards the end. The last series of bosses, particularly the final boss, throw out some rather cheap attacks. Even worse, the game also forces you to use specific party members for story reasons, which may result in underleveled and undergeared characters being forced into combat if they’ve been neglected up to that point. Amazingly, however, defeating the final boss is not actually necessary to beat the game, as losing will still allow the player to view the ending. This makes the forced party set-up a bit less troublesome.

Despite its mostly average base components, Crimson Gem Saga is a surprisingly good game. Mixing some of the more basic, modern gameplay components such as eliminating random encounters with a traditional combat system in the vein of Dragon Quest works extremely well, and Atlus has done a terrific job of providing a high-quality localization. Crimson Gem Saga isn’t going to appeal to everyone, but for RPGamers looking for a traditional, handheld RPG experience, it’s a great place to start.