It Takes a Community to Raise a Pom

Far, far in the past (i.e. five years ago), a strange band of creatures fell to Earf (misspelling deliberate to match the text in Japanese) from the Moon. These cutesy little lepoids were called Poms, and nobody knew what to do with them. Some blamed them for every misfortune, and others drove them out. One little girl made friends with them, however, and in return was given a magic staff. Thus begins Community Pom, the cutest action RPG I have played in a long time.

The game’s plot, as continued from above, is a simple one. Luru is the pig-tailed protagonist who wants to help the Poms survive in a world of fear, jealousy, and monsters. To this end she has decided to build a community for them to live in. At the same time, a pint-sized warlock named Shiviel is out to conquer the world as a means of revenge against all bullies. It must be said that this game is about as silly as they get, and this should be apparent from the get-go. The silliness pervades every facet of the game, from the cutely ridiculous monster designs to the actions of Poms at work within the Community. Bosses range from immense dragons to watermelon golems, from hard rockin’ skeletons to a Cheshire Cat that vomits forth particolored candies. The heroine is a little blonde girl with pigtails who exclaims loudly at the sight of anything cute. It’s even possible to equip her with a pair of squeaky shoes to make the walks around Earf more noiseful.

There will be a lot of walking. Community Pom sports seven dungeons of major plot importance, six more that are much smaller and important only for the loot, and one secret dungeon that boasts some of the toughest enemies in the game (like evil kewpie dolls slinging razor yoyos). It’s important to note that despite its experience system and other RPG facets, this game plays much more like Link to the Past and other 2D Zelda titles. Because of this, dungeon design becomes very important, and Community Pom delivers. The main levels are all large and well thought-out, with lots of puzzles and platforming elements. This game gets bonus points for making manor and museum levels that are actually laid out exactly as they would be if they were real locations. 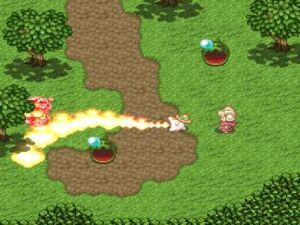 Combat is simple enough. Players press the X button to jump and the square button to whack things with Luru’s staff. Items and spells can be mapped to the circle button. Luru gains magic from grimoires scattered throughout the game. MP is not used in this game; instead magic must be charged for a moment. Once powered, the spell either works automatically or (in the case of attack spells) gains a limited number of uses before it must be charged again. When critically low on hit points, Luru can also supercharge spells for extreme damage.

Backing up Luru on her adventures are the Poms. While most of them must stay in the Community, the player can choose any three of them to accompany and aid the heroine. Each Pom has a specific ability like fire-breathing, tongue-bridges, or teleportation. Some are activated as easily as by picking the Pom up and throwing it. Others require that Luru deliver a resounding smack upon the unfortunate Pom’s skull.

Normally, the Poms just follow Luru around. A press of the R1 button puts them into the free-range mode, which allows them to attack nearby enemies. Special abilities can also be used at this time. Pressing R1 again summons them back to Luru’s side. As action-RPG teams go, it’s definitely geared more towards solving puzzles than any form of cooperative combat. As Poms dispatch enemies, they accrue bad karma. If a Pom’s karma rises too high, there is a danger that it will mutate into a Moom, a nasty little monster that delights in the misfortune of others. This is mainly a theoretical problem, as most Poms seem to cap at 90 Karma, but the game likes to hang that threat over the player’s head.

Preventing this potential karmic catastrophe is the purpose of the Community, i.e. the simulation aspect of the game. The idea is that, by removing the Poms from direct conflict with humans and providing the stability of their own town, then the Poms are much less likely to change into Mooms. To give commands to the Poms in the Community, Luru has to feed them. Meaty foods are frequently dropped by enemies and can be bought in towns. Fruits and veggies have to be found or grown by the Poms. Each type of food has a command attached to it (Build, Farm, Shepherd, or Study) as well as a numerical value that shows how long a Pom will commit to an action before stopping. If there’s no opportunity available to do the assigned task (e.g. no sheep to shepherd), then they will default to a different action like studying regardless of the food given. 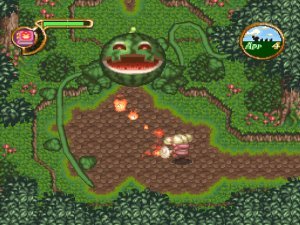 Watermelons, the kaijuu of the vegetable kingdom.

Before anything can be done in the Community, something has to be built. There are a variety of structures available, as well as different levels of construction for houses. Each structure has different defense values which determine how well it stands up to the attacks of monsters. Such attacks come more and more often as the game goes on, so it’s important to keep the Poms building. Farming and shepherding are both necessary as well, as the former provides high-level foodstuffs for the Community, and well-raised sheep can earn good money to support Luru’s quest. Studying is the only action without an obvious benefit, but it has its uses. By keeping their noses in a book, the player can reduce bad karma in the Poms. Certain Poms may also upgrade if they study hard enough, unlocking the mysterious Library in the process.

The more specialized buildings all have some odd use in the Community. There’s a casino with a memory-matching game. There is a church and a clinic, which offer curative and healing services. There’s a library that offers a mystical picture book for perusal. There’s even a merchant who moves into town (and bears a strong resemblance to a certain Dragon Quest peddler). He’ll get you things in exchange for rare trading cards that are scattered throughout the game.

This game has an odd soundtrack. It’s incredibly bouncy and upbeat, as would fit an early-gen PSX action title, but from listening it’s easy to guess what the composer (a guy going by the monicker of h. ToBetA) listens to in his free time. The overworld theme is a whacky game remix of “La La (Means I Love You)” by the Delfonics. The boss theme sounds like it incorporates the “dum-de-dum-dum” of the Dragnet theme song with the twangy sound of a mouth-harp. Of the rest of the soundtrack, much of it could have been adapted from J-pop melodies from the 70s, 80s, and early 90s.

Community Pom isn’t a difficult game, but neither is it a pushover. Boss battles can be frantic at times, especially the handful that make Luru play jumprope with lightning bolts or other such hazards. Neither is it particularly difficult to understand, though of course a good knowledge of Japanese is necessary to get the most of it. The controls are easy to work out, and the map isn’t so wide as to make it hard to figure out where to go next. It could be reasonably finished in about twenty hours, though a first-time player will probably take a little longer.

That leads into one of the few real complaints which could be leveled against this game — it could easily have been much longer. Most villains only show up once or twice, but have enough personality or quirk to them that they could have been used more. And for a game that has such fun with generic RPG dungeons it lacks a few obvious choices.

Still, this is a game that was meant to be fun and cute, not hardcore. It’s not the most satisfying of action titles, but it knows what it wants to be, and does that quite well. To anyone looking for a light-hearted and playful romp on the PSX, this is your game.