Until Chronus Arc I had not experienced the unique features of a Kemco/Hit-Maker title, except vicariously through the misery of others on this site. Now that I have completed one for my very own, I too know firsthand what this company’s concoctions are liable to produce — an abomination in just about every respect. At least it never crashed, though being better than Grinsia is not much of an accomplishment.

Chronus Arc‘s combat system is a good place to start for what it does wrong. It’s a standard turn-based affair, with three player characters squaring off against up to five enemies. Events here tend to take place heedless of the nominal agility rating, to such a ridiculous extent that planning anything is an exercise in futility. Enemies get stronger very quickly, and surviving means a grindfest will have to take place using a combat engine that is not much fun to experience. Otherwise there isn’t much unique to relate about fighting, except that things speed along at a pretty good pace, which is absolutely necessary for efficient grinding. Hit-Maker unfortunately managed to include visible enemies in dungeons that are far more annoying to track down or avoid than most games have ever achieved, which is not helpful when trying to collide with a great quantity of them quickly.

In addition to grinding, characters can upgrade their equipment to become more survivable. What would be a standard procedure in other games is made much more complicated here by the paucity of store-bought material, as Hit-Maker included a number of resources that are collectible sundries. Certain collection spots exist in each dungeon, which dispense a variety of materials and must be visited multiple times to procure the necessary materials for enhancing equipment. The requirements for upgrading each piece are quite specific, and if the player doesn’t have what is needed then going back to promising locations as many times as necessary will occur. Particularly since there are so few equipment upgrades sold in shops, this procedure must be undertaken to make what is currently available do its job as long as possible.

Chronus Arc includes a class changing feature that has enhanced many games over the years, but its execution here leaves an enormous amount to be desired. Characters can change class in a certain location at or past level thirty, and this is the only way to learn new techniques. An item is required to perform the class change though, and as only a couple of them are available in treasure chests, the mandatory books have to be bought in an unpleasant way. The currency for purchasing such things is Mana, and it is gained by killing enemies at the rate of about one per four foes slain. When fifty or one hundred Mana is required to purchase a class change item, it creates a recipe for lots of grinding with no letup. As a further insult, the game does not record which class a character has previously been, nor are the statistic gains held over from a previous class cumulative. 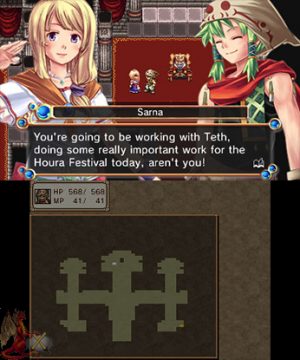 Does this sound like the kind of thing you’d want to know more about? Well, TOO BAD!

Chronus Arc also features puzzles of the familiar block-pushing variety that umpteen RPGs have offered over the years. These are never particularly vexing, save for a few with enemies wandering around while the player is trying to solve the thing. They nevertheless manage to be troublesome when they must be re-solved if the dungeon is exited, and usually require pinpoint maneuvering to get the blocks into the right spot.

The narrative propelling Chronus Arc along is one that supplies several interesting ideas which are never addressed at anything like the length necessary. A boy hero, his longtime childhood friend who is also a princess, and a girl who is surprisingly dependent upon her absent father for a world-renowned pop star must battle against evil forces seeking to use Chronus Fragments for ill. The Chronus Fragments are used every decade in a function that can undo major events by altering the historical record, something that deserves far more consideration than it is given.

In addition to offering ideas that are immediately squandered through lack of attention, Chronus Arc‘s narrative is poorly localized. Most of the time it manages to be intelligible, but strange turns of phrase pop up often. When it isn’t oddly written, or outright typo-ridden, the text is workmanlike but dull. Nothing these characters say is interesting, and the events that they experience fail to captivate the player. 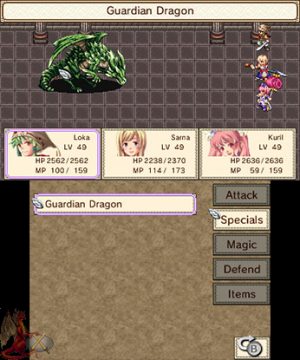 It had dialogue before this, but never mind! Kill it with extreme prejudice.

Chronus Arc automatically saves after every fight, and the player can manually save at almost any time. This is extremely helpful when death is common for those trying to proceed without grinding, but some extra fighting removes all challenge up until the final boss, which has two actions per turn and lots of cheap moves with which to pummel the player. None of Chronus Arc‘s difficulty comes from interesting fights that feel like they demand using the brain, only from its hilariously inconsistent turn order and predictably powerful enemies.

In seeking to emulate the looks of the Super Nintendo, Chronus Arc is superficially successful. None of its environments are particularly interesting to behold though, and the battle animations are unexciting. Hit-Maker’s reliance on palette swaps becomes egregious less than a quarter of the way through the experience, especially in using the same sprite throughout the game for multiple visible enemies in dungeons. Audio is mostly tolerable at least, with tunes that are pleasant if unmemorable.

At first I was enraged when I started to get killed all the time. Then I figured out how to just grind, and the game became easy again until the final boss demanded further statistic embellishment to take down. Now that I have experienced the entirety of a Kemco title, I too understand why this constantly-reviled publisher gets so much flak. Maybe other games under the Kemco banner are better: it wouldn’t be hard.