Time Was Kind to This Port

When Chrono Trigger was released in 1995, Square heavily hyped the game’s development leads, calling it a dream team of designers including the top creators of the Final Fantasy and Dragon Quest series. The result was one of those rare games that lived up to expectations: a revolutionary must-play experience. Now, nearly a generation later, a port entirely faithful to the original is available for the DS-owning masses. While the “enhanced” aspects do not necessary make it a required purchase for those with the SNES or PS1 version, newbies should jump on Chrono Trigger DS as the gameplay and graphics aged well, and, oddly, the uncopied innovations from last decade still feel fresh today.

The story begins with teenage protagonist Crono’s mother waking him up and reminding him that the millennial fair is taking place in the town square. What follows is one of most interesting and smooth plot transitions from “teenagers goofing off” to “save the world from annihilation” in any RPG. While enjoying the fair, Crono runs into Marle, who insists upon hanging out with him. A freak teleportation machine accident tosses the two of them four hundred years into the past to 600 A.D. This quickly initiates the game’s time warping mechanic, and the hapless heroes find logical reasons to leap into time gates until they eventually land in the post-apocalyptic future and discover a video of a gigantic creature, Lavos, erupting from the crust and ruining the surface of the world.

The time-changing mechanic works on many levels. While most RPGs find forced, unrealistic excuses for the protagonists to continually rush after villains, only to fail repeatedly, Chrono Trigger sidesteps the issue by creating a scenario where Crono literally has all the time in the world to make things right. The party moves from time period to time period, location to location, trying to find a way to destroy Lavos before it can destroy the future. Side excursions can regularly take place in the main quest without coming across as bizarrely time-wasting because the protagonists literally have time on their side. The result is one of the most coherent, rational series of story events executed in an RPG. Rather than sending the player back and forth across the world to solve menial problems, the plot sends the player through time, continually solving today’s impregnable problems by fixing them yesterday. The main plot sticks to meaningful tasks, but there are also many optional dungeons and treasures to discover that fill out the game world and provide powerful equipment.

Helping keep the story fun and engrossing is the likeable cast of characters. Party members have unique personalities and abilities, and everything about them flows together and makes sense, from character designs to speech to battle abilities. From an early point, the player can select the composition of the three-man party. Conversations over the course of the game change depending upon who is in the active party; benchwarmers do not suddenly appear to talk in cutscenes as they do in most Japanese RPGs. Although Chrono Cross expanded on this and made it better, it is still rare to see the exact text of conversations change to match the speaking style of who is talking. It creates an endearing effect for the various team members, and the player can freely play favorites, or keep the party members dynamic to get a feel for their different personalities. 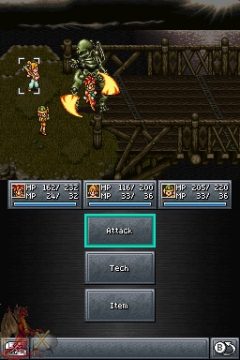 While the story provides a solid foundation for choosing which characters to keep active, their vastly different combat strengths and weaknesses will determine who hangs around in each dungeon. Everyone in the party gains a fixed series of eight techs over the course of the game with minimal overlap between them. Lucca, the inventor, is the only one who learns fire spells. Ayla, from the prehistoric age, is the strongest character, but she only learns physical attacks. Marle uses ice and healing spells. Frog is a jack of all trades with some healing abilities, some water spells, and decent physical attacks. The unique abilities of the seven heroes, along with the restriction of only being able to use three at a time, require the player to think hard upon who to use in different situations. Fortunately, party members can be changed anytime outside of battle, so the choice is not rigid. The diversity here is a great change of pace and shows a strength of combining the minds behind Dragon Quest and Final Fantasy; it is better for each person to have eight worthwhile skills rather than Final Fantasy‘s fifty useless spells per person or Dragon Quest‘s scant necessary spells which are used hundreds of times.

Chrono Trigger further takes advantage of the individualized abilities in what is Square Enix’s best and most innovative application of the Active Time Battle system. In addition to the expected “attack, tech, item” choices that can only be executed when a bar fills up, the player is presented with the option to execute double and triple techs. When two characters both have full ATB bars, they can execute a double tech together. Double techs are a combination of two learned techs, and deal more damage in addition to covering for some members’ weaknesses in combat. For example, when fighting an enemy immune to physical attacks, Ayla can only damage them when executing a double tech with a spell caster. Monster designs creatively challenge the player to utilize all of the single and double techs by being weak to certain elements, resistant to others, or changing their battle abilities after getting slammed by a certain skill.

Another innovation here is the significance of how the monsters are situated on the screen. Some techs can only hit nearby enemies while others affect foes in a specific area of effect, such as a horizontal line or a small circle. Monsters often adhere to similar rules with their attacks, too. Lastly, there are no random encounters; hostile creatures visibly roam around the dungeons, either patrolling or goofing off or just sitting there, and only when the party gets too close to them will they initiate a battle. Many encounters are unavoidable, but enough encounters can be sneaked by to make it worth the effort. Infested locales that need to be visited more than once are the most likely to have avoidable enemies, and in a few dungeons the enemies never respawn. 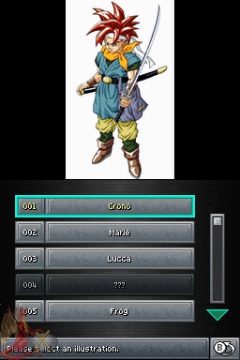 A noteworthy marvel of this port is that it looks and sounds exactly like the original SNES version. Square Enix clearly put a lot of time and effort into getting the DS to sound like a SNES; that is not an easy task. The payoff is big, though, because Chrono Trigger DS‘s presentation aged well and is still excellent. Usually given third fiddle to Final Fantasy IV and VI, Uematsu and Mitsuda’s soundtrack here was one of the best ones to grace the SNES, and now it is one of the best on the DS. The game’s script was retranslated, however the original version of Chrono Trigger already had a strong localization. Unlike Final Fantasy IV DS, newly written dialogue was not necessary here, and aside from adding back references to alcoholism and drinking, it is not substantially better or different from the SNES script. The anime cutscenes from the PS1 port are included exactly as they were in that version, interjecting themselves at key plot points.

The interface is clean and responds immediately. While the game can be played in a traditional mode to make it identical to the SNES version save for a map on the bottom screen, it behooves the player to give the upgraded DS interface a shot. In DS mode, the top screen is devoid of menus and stats, displaying the playing field without covering any of it up. The bottom screen houses tappable buttons and a map. Conveniently, the menu buttons outside of combat double as shortcuts. Rather than opening the menu, scrolling down, then selecting “save,” the player can just smack the “save” icon on the button screen to zip right there. The buttons are large enough to hit with a thumb, and small enough that they do not clutter the screen or the map. Battle commands can be executed purely using the button interface, although it is not particularly more or less convenient unless the player devoutly loves using the stylus. Unfortunately, walking around the game world with the touch screen is awkward, so playing solely with the stylus is not practical, although everything else about the enhanced interface is great.

Chrono Trigger DS truly stands the test of time. From the distinct 2D visuals, to the wonderful score, to the singular characters, to the unique take on a well-known battle system, everything was done exquisitely in the 90s, and it is all there and just as fun today. The add-ons to the enhanced port indeed feel added on, and do not introduce anything worthwhile to the experience. The monster arena is poorly implemented, taking too much time and attention to really enjoy, and being a perfect example of tacked-on content. A bonus dungeon that appears toward the end of the game is bland and feels out of place. Square Enix claims that an extra ending or two were added, but as anyone who has played Chrono Trigger knows, getting of all the extra endings is a time-consuming pain, especially in the YouTube era. Those who must squeeze every ounce of content out of a game will probably love this stuff, but casual gamers will find nothing grand in the new material. Gamers who have yet to play Chrono Trigger should obtain and enjoy this cartridge as soon as possible. People who are experienced with the previous versions already know what to consider: is it worth buying the game another time? If the “enhanced” parts of the port are the deciding factors, then stick to the SNES or PS1 version as there is not enough difference to warrant shelling out more cash.