Chaos Seed‘s lack of a release outside Japan can be blamed on bad timing. The game was initially released on the SNES in 1996, hardly an auspicious time for a title with no brand name marketability to be localized. Japan got the game again, in the form of an upgraded Saturn release for 1998, which was up against even worse odds for release in the other parts of the world. For a game to be denied release outside of Japan, particularly in the 1990’s, is of course not surprising, but in the case of Chaos Seed it is uniquely disorienting. Best described as an action RPG merged with a resource management simulation, this is a title that would require immersion time regardless of the language onscreen, but wading through lots of kanji reduces its appeal to the hardcore import crowd, which is a crying shame considering how rewarding it can be.

The plot of Chaos Seed finds an unnamed young protagonist required to rejuvenate the depleted earth. What makes this task far more difficult is that his ability to do this makes him a Dousen, something feared and attacked by humans everywhere. Many antagonists will seek the hero’s head on a platter, either because he is a strong adversary or because they attack all Dousen on sight, and most of them are recurring throughout the game.

Enemy recurrence is common because Chaos Seed is structured oddly. The game is comprised of scenarios, most of which have multiple endings, and a fair number of parallel worlds are thrown into the mix, thus allowing previously seen antagonists to appear again. Making sense of the plot is impossible without either Japanese knowledge or a translation, and as the only translation of this game that exists is for the SNES version, grasping the myriad details of the game world will prove an insurmountable challenge for those without multilingual capability.

Understanding the story’s intricacies is secondary to deducing how to actually play the game, however. Rejuvenating the land is accomplished via a cave with various rooms, and a central Dragon Furnace that must be fed energy. Energy is generated from a certain type of room, whereupon the hero must extract it and run to the Dragon Furnace. Upon reaching the necessary sum of energy the current scenario requires, an ending will result. 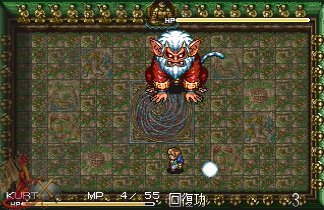 You know, you’re gonna have to shock the monkey.

Extracting energy and completing the scenario is not so simple, however. The first problem comes in the form of the people who fear the Dousen, for they pop into the cave every turn in an effort to undo all his hard work. They break the energy extraction rooms if the hero doesn’t immediately confront them, and must be beaten swiftly. Combat is not particularly intricate in Chaos Seed, mostly involving hit-and-run strategies, but the hero does have a number of magic spells at his disposal, with the number increasing as he gains experience levels. While not very complicated, fighting the enemy will absorb quite a bit of time and is very necessary when the hero’s level is reset for each different scenario. This is not a problem however, as the enemies scale in strength alongside the hero.

Far more complicated than dealing with the humans who pop into the cave is managing it, and this task will require the hero to construct new rooms often. Adding a room is easy, accomplished by holding the C button along a wall. Dots onscreen indicate the resources present in the area where a room will be placed, and without some innate resources the room will be a waste of space. The hard part comes from the need to decide what that room will become, which demands knowledge of the kanji describing all the possible types. Making a new room also requires the use of some of the energy that would be used to hasten completing the scenario. Fortunately, once one has learned to recognize the various kanji for the eight different room types the process is fun and painless.

Especially helpful is the room that summons various animal helpers. A dozen varieties of computer-controlled assistants are available, and each has a specialty. A bird-man will repair broken rooms, a wingless dragon will transfer innate energy between rooms so that their functions can be properly performed, and there are a variety of combat assistants. The hero can take several aides in his own party, but setting up other parties of animals to pace in a player-determined path is also useful. They can be slain by the frequent incursions of humans, but a quick trip back to a summoning room can resurrect the dead, especially handy when the summoned creatures gain levels and experience from fighting. 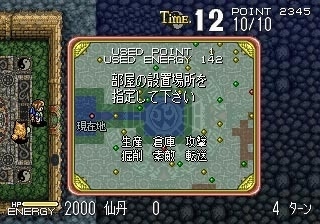 A production room is possible with this setup. Keeping a guide to its kanji is mandatory.

The fact that every turn has a time limit is rather bothersome, since it means that the hero has to rush around as fact as possible. The timer does freeze when enemies share the same room with the hero, and viewing the cave map also freezes the clock, so taking a breath for reconnaissance is never prohibited. The timer rarely grants enough leeway to look into every room of the cave before the turn is over, however, making a bit of frustration understandable.

Stopping the timer when enemies are onscreen is also enormously helpful because of the sheer chaos onscreen that usually results. Even if the hero is alone and not accompanied by allies, the pandemonium onscreen from the various sprites slinging attacks at each other can be hard to follow. Standing out of the fray and letting the computer-controlled allies handle the job can be difficult, though since enemy strength correlates with the hero, getting killed because of a moment’s poor visibility is not a real risk.

Making an accurate appraisal of the time needed to complete Chaos Seed is far more difficult than for most other games. Finishing an early scenario will take just a few hours, and be rewarded with an ending. Finishing all twenty scenarios in the game with the multiple endings most possess demands an enormous time investment, and tracking it is difficult because the game clock chronicles the time spent with each scenario, not in total. There is definitely no shortage of content in Chaos Seed, probably close to one hundred hours’ worth, but the means by which the game tabulates it fits poorly with the system of most other titles. 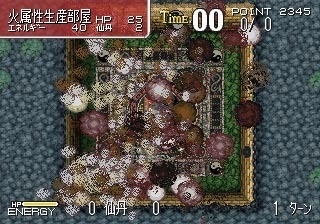 Rocks and random bugs must be dealt with before a room can be used.

Chaos Seed‘s SNES roots show rather plainly in the visuals. The amount of information displayed onscreen has been increased, and the characters have large portraits during most dialogue sequences, but the core sprites would not have challenged the Super Nintendo’s graphics capability. The music does an excellent job of complementing the ancient Chinese setting with its orchestration, however, and stays fresh by varying tracks according to plot developments within each scenario. Considering the team responsible for Lufia 2‘s fine music was also responsible for this score, the quality is not hard to understand. Being on the Saturn also allows for quite a bit of voice acting, which is mostly strong, but its mostly-utilitarian purpose will be lost on those not fluent in Japanese.

Occasionally cluttered visuals aside, the major problem that plagues Chaos Seed is its requirement to know some Japanese. There are some FAQs to assist those without knowledge of the language, but memorizing a few kanji is essential unless one wishes to constantly glance back at the FAQ. This familiarization is quite rewarding because of the mysteriously addictive qualities this game possesses, but clearly it is not for everyone. The SNES version is well-regarded and will do in a pinch, but Chaos Seed on the Saturn is an addictive experience unlike any other.