Familiar Action with a Twist

It’s hard to believe that Capcom’s 25th anniversary is coming up next year. Despite its reputation as “The House That Ryu Built”, the RPG genre is no stranger to the company, as the Breath of Fire series is one of its mainstay traditions; for better or for worse. In light of the surprising success of Breath of Fire V: Dragon Quarter, which was released earlier this year in North America, they decided to bring over a fairly unknown game based on a Japanese manga published by Kadokawa Shoten. Many RPGamers were quick to recognize that the gameplay mechanics were very similar to that of a previous Capcom title: Devil May Cry. But Chaos Legion is an RPG in its own right and a very trying title at that. The odd combination of action and RPG elements may not appeal to everyone, but it wrapped in a wonderful presentation that shows great effort by the game’s development team.

At first glance, Chaos Legion seems nothing more than a spruced up version of Devil May Cry. In fact, the battle mechanics are very similar, with the main character fighting hordes of enemies in several preset stages. What sets this game apart is its innovative combo system, which utilizes the power of “Legions”. 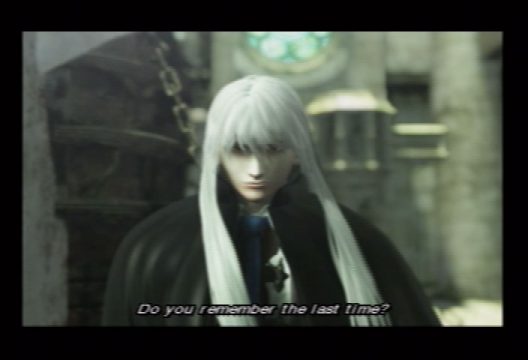 I swear you look familiar. Isn’t Lucrecia your mother?

These Legions are summoned monsters which can be brought in and out of the battle at will. Besides serving as helpers in combat, each legion bestows several different benefits to the main character. For example, the Claw Legion “Flawed” consists of several birds that are particularly effective against metallic enemies. However, when leveled enough, they give the ability “Double Jump” to the main character, which enables him to leap to greater heights. There are seven legions in all in the game, and each brings their own strengths and weaknesses to battle.

Legions can also be used as guards for the main character that help clear out attacking enemy groups. However, they are not immortal. In addition to Sieg’s Life bar, there is also a Soul bar which is used to gage the life of the Legions. If the Soul bar is ever drained completely, the Legion’s amulet is cracked and cannot be reactivated until it is refilled to a certain point. Fortunately, Sieg can switch between two sets of Legions in each stage, providing a certain amount of flexibility in battle. 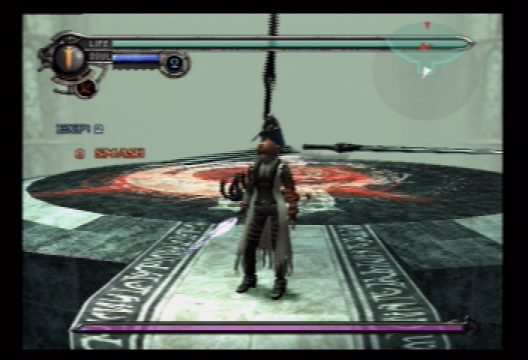 While it might seem overkill at first glance to have up to six swordsmen patrolling the battlefield looking for enemies, Chaos Legion has swarms of enemies in its stages that can only be rivaled by those of the Dynasty Warriors series. The game is also extremely difficult in some parts, but this can ultimately be overcome by leveling both the main character’s statistics and the legions themselves. This is the main RPG element in Chaos Legion. Not only is experience gained for killing enemies, but bonuses are also given for parrying attacking monsters and beating certain goals for each stage. All of these statistics are kept like a high score table, giving the game more of an action-oriented feel.

As mentioned earlier, Chaos Legion is a difficult game. This is not an overstatement, as there are four different levels of difficulty available in the game. To alleviate frustration (and hours of lost gameplay), RPGamers can retry a stage from the last continue point or restart at the intermission screen while keeping a portion of their EXP. This is a cue taken from Breath of Fire V: Dragon Quarter, also a difficult game in its own respect. While it may seem a little ridiculous at first to quit and restart a stage multiple times, it is a necessary evil, as the key to winning many of the stages is having a set of Legions powerful enough to take on the enemies and protect Sieg at the same time.

Chaos Legion‘s highpoint is in its graphics. Capcom has been producing some beautiful games for the PlayStation 2 console as of late, and this title is no exception. Load times are nearly non-existent, and some of the best scenes involve Sieg battling with his nemesis. Despite the constant hordes of enemies that often barrage Sieg, Chaos Legion keeps framerates high without any major slowdowns. This is also done with a minimum use of fog, which has been normally used in titles with similar framerate problems.

What a pity that the plot couldn’t have had as much attention as the gameplay and presentation. RPGamers play as Sieg Warheit. He’s a knight who’s dispatched to kill Victor DeLacroix, a member of a religious order that had murdered one of its high priests. Along the way, he meets a companion, Arcia Winslet. A member of the fabled pistol-toting Silver Maidens, Arcia (who looks frighteningly like screenshots of Yuna from Final Fantasy X-2) wishes to avenge her family. The term “fantasy opera action RPG” had been used before the game’s North American release, and it oddly fits the description of the game’s presentation, especially in the beautiful FMV cut scenes. 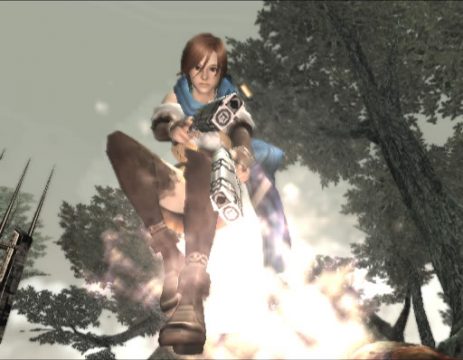 While not nearly on the level of excellence as its graphics, all of the voices and music are appropriate for the game’s setting. Ranging in musical genres from rock, opera, and J-Pop, the music succeeds in setting the mood of the various stages, although some tracks are horribly repetitive. Capcom took the interesting step of including a theme song (and music video) with the game: Fly by J-Pop group Liv. Whether the song is appropriate is a matter of personal taste, but much better work has been done with other titles.

Voice-acting with the game is decidedly above average, as the English dubs are actually more appropriate for some of the characters than the Japanese dubs, which are available after one playthrough. Subtitles are also included in English, Japanese, French, and Spanish. This is a great development which should be continued with other similar titles.

With all of these developments, RPGamers that particularly enjoy Chaos Legion can replay the game several times. A major sidequest in the game involves resurrecting the Ultimate Legion Thanatos. Players can unlock more difficulty modes and play through the entire game as Arcia. And as mentioned before, a high score table displays all the record completion times for every stage.

Chaos Legion will probably not remain in anyone’s memory for a long time afterwards, as it has been dismissed by several gamers as a Devil May Cry clone. However, anyone who enjoyed the battle system of the previous title will have a wonderful time with Chaos Legion, as it makes for an interesting action RPG hybrid. PC gamers will also have the chance to experience the game which is slated for a Fall 2003 release worldwide, and will feature resolutions of up to 1600*1200 and support for eight different languages. Whether this will be enough to give it a second wind or not is questionable, but fans of the Action RPG genre are encouraged to at least rent the game, and judge for themselves whether a “fantasy opera action RPG” is worth it or not.