Chantelise: A Tale of Two Sisters and I have a very love-hate relationship. I expected the same charm I got from Carpe Fulgur’s first release Recettear, but instead ended up with a perky gem with a bad attitude. The game certainly has tons of promise, but it’s marred by many issues that will likely turn off the average gamer.

This tale of two sisters begins on the eve of the Red Moon. Chante, compelled by this phenomenon, ventures into a nearby forest despite her mother’s warnings. Elise, worried for her sister’s safety, follows behind and witnesses Chante’s dark transformation into a fairy. With Chante’s unfortunate makeover rendering her petite in size, the two sisters travel forth to find a cure for this inexplicable affliction. Along the journey, they meet Aira, a shop owner from a nearby town, who isn’t entirely all that she seems.

The story of Chantelise is one of sisterhood and showcases a positive spirit. There’s a lot to like despite its averageness, as the localization is crisp, refreshing, and reminiscent of Recettear‘s wackiness. There’s tons of great banter between the main cast of characters, and Chante sticks out as being the one who drives most of the entertainment forth. Even though the story is far from perfect, it has its moments and it is the least of Chantelise‘s troubles.

The game sports a frantic hack-and-slash combat system that relies on switching between Elise’s physical abilities, and Chante’s magic. Players will beat down enemies with brute force and collect magical gems that allow Chante to cast spells. Chaining gems allows for larger and more effective magic spells to be cast, and players can mix and match for different combinations. Being able to chain attacks and magic is an addictive quality of the battle system, but the game becomes lopsided by its overall design. 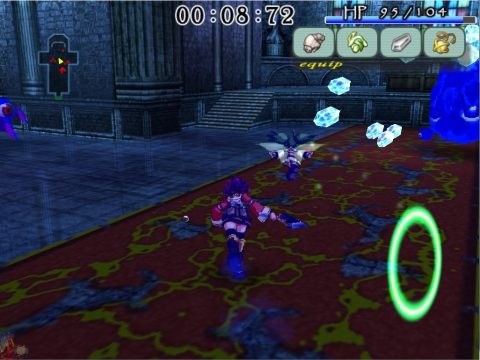 See our blue friend in the back? Yeah, he wants you dead.

Part of the dilemma with Chantelise is the repetition. Elise must clear out all enemies before progressing into the next area. If Elise dies in a dungeon, she will keep all of her items (minus the gems), and whatever progress she’s made. However, players will be placed at the entrance to the dungeon and have to retread, though the doors stay open if areas have been completed. If Elise makes it to a boss and dies, she will have to continue to replay the entire dungeon over again and cannot progress until the level has been cleared. There is a practice mode to help gain some experience, which is useful, but should be unnecessary. It’s hard to be forgiving toward this design decision as JRPGs have evolved since this tactic was first employed. What it creates is an unfriendly atmosphere that makes dungeon crawling a chore as opposed to a pleasure.

But that’s just the beginning. Loading a save game in Chantelise will always dump players onto the World Map, meaning whatever progress that has been made in the dungeon must be redone. Furthermore, the game also suffers from stiff controls and an awkward camera that adores working against the player. While it’s advisable to use a gamepad while playing Chantelise, this only fixes a small handful of the game’s control issues. For starters, although players can lock onto a target, the camera will still move all over the place and never feels truly fixed. Due to how close the camera follows Elise, it’s also not possible to gauge the amount of enemies that are in the surrounding area.

It also doesn’t help that the number of healing opportunities is severely lacking in places. Health items instantly restore Elise’s health and cannot be saved for later usage. Considering the game’s punishing challenge, it seems a bit odd how sporadic many of the health drops feel. Speaking of difficulty, Chantelise is an exceptionally hard game in terms of an overall challenge. This challenge can at times be very rewarding, or in others it’s a kick in the teeth. For some gamers, the challenge level maybe too overwhelming, and for some it’ll feel right at home. The boss fights add tons of flavor and uniqueness to the game, and even though they are challenging, they are mostly fair often requiring some pattern recognition from the player. Each boss may take more than a few tries to defeat, but Chantelise is not a game about getting things right on the first try. In fact, Chantelise is a game that encourages players to die, retry and see what they’ve learned from their previous mistakes, and this method of tough love does feel rewarding when taking down mobs of foes or the big bad boss.

Though the majority of the gameplay has been heavily criticized, Chantelise is fairly generous on one major aspect: game overs do not penalize the player. Any loot that has been gathered during a dungeon run can be kept and sold back to the Town shop. Each dungeon is also filled with secret chests that can be discovered during each dungeon delve, containing a valuable piece of equipment that will beef one of Elise’s four stats. Sometimes they also contain Ferromin, which boosts Elise’s hit points. Finding or purchasing these items is critical to success in Chantelise and failing to seek out these items will have negative consequences as players progress. 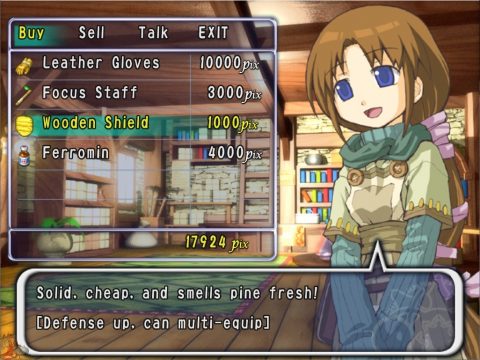 When she offers you dinner, you turn tail and run.

Outside of the game’s localization and addictive combat, Chantelise has a wonderful soundtrack. Not only is it lovely ear candy, but it loops splendidly and never feels stale. The music is mostly upbeat, but the few subtle tracks such as the Aquian Ruins theme add a lovely sense of variety. The game’s Japanese voice acting is also quite good and never feels awkward or grating. The sound quality within the game is easily its highest point.

Much like its sister title Recettear, Chantelise sports decent quality visuals that are reminiscent of the PlayStation era. The environments are well designed, colourful, and showcase plenty of detail. There is some palette swapping in terms of enemies, but this is pretty forgivable considering there’s just enough enemy variety to keep the game from feeling bland. The still portraits in the game are quite lovely looking and fit the overall atmosphere of Chantelise‘s world. While the graphics won’t stand out in a crowd, they are more than serviceable and offer enough excitement to prevent them from becoming stale.

Chantelise is a game whose motto comes straight out of playwright Samuel Beckett: “Ever tried. Ever failed. No matter. Try Again. Fail again. Fail better.” It’s an easy game to recommend for those looking for something with an extraordinary challenge, but it’s harder to pitch to those looking for a worthy successor to Recettear. Overall, Chantelise will tickle those who are gluttons for punishment, but with its unfriendly game design, it’ll leave many newcomers starving for something more approachable.