Is the Third DS Game the Charm?

The Castlevania series started many years ago with the classic Nintendo original. Even though the second game proved too frustrating for many gamers, the series continued to garner a strong following. While there have been a number of releases on home consoles over the last few years, Castlevania has flourished most on the handhelds. Castlevania: Order of Ecclesia marks the third game on the Nintendo DS. And while it has a few flaws, the third game in the series lives up to the legacy.

First and foremost, Castlevania is a difficult game. The average gamer will die many times throughout the course of the adventure. Many of the bosses have patterns that take a few attempts to learn. A couple require unorthodox methods to finish, realistically taking five to ten attempts to figure out the special actions needed to win the battle. The normal baddies should not be underestimated either. One wrong move with some of them can kill the player instantly. Aside from a couple of gimmicky boss battles, the challenge really adds to the game’s attraction as it keeps multiple playthroughs from becoming boring.

Instead of fighting with standard weapons, Shanoa, the heroine, uses glyphs. Throughout the game, she will find symbols that can be absorbed. Two attack glyphs can be equipped at the same time, which allow the use of weapon attacks (sword, lance, axe, etc.), magic attacks (light, fire, electric, etc), and other special attacks. The player can use these two glyphs in quick succession, allowing for combos, or combine them to do a special attack. Special attacks consume hearts, which veterans will recognize quickly as a staple to the series. A support glyph may also be equipped, which can give special abilities such as increased defense, or even the ability to fly. While an array of glyphs keeps the gameplay fresh, players may find that a select few are much more effective, even against monsters that do not necessarily have weaknesses to them. Overall, the tight gameplay is one of the highlights of this Castlevania title, and veterans will not be disappointed.

Shanoa fights an array of evil beasts over a kaleidoscope of different areas. Castlevania: Order of Ecclesia features a number of outdoor areas such as swamps, a mansion, forests, caves, and more for the first half of the game. Unfortunately, these outdoor areas are hit or miss. For example, some of the areas are copies, with designs and monster placement identical to areas before them. On the bright side, while going through different areas the player is treated to extremely detailed 2-D graphics. In the library, for example, papers are kicked up as Shanoa runs across them. On the ocean levels, waves rise up and crash down in the background even as flotsam and debris float on the tides in the foreground. There are many different types of background music as well, and each sounds great. Several of the soundtrack selections are quite memorable. It’s a shame that the same level of attention was not put into the actual design of some of the levels. A handful are so small that they take only a few minutes to complete. Thankfully, the last level is lengthy. While not as huge or complex as other iterations, the last level is full of twists, traps, treasures, and bosses. 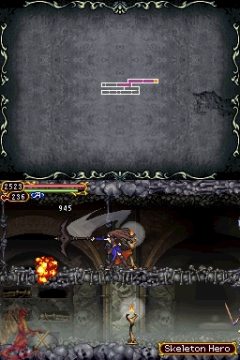 Early in the game, Shanoa comes across a village and finds that almost the entire population has been kidnapped. Throughout the first half of the game, she will save people from the village as she pursues her own goals. As she rescues each of them, they return to town and help as storekeepers, journalists, medics, etc. Almost all of them offer missions, which, when completed, open up more of the story, and, more importantly, new items and gear. Missions are extremely varied, including standard fetch quests, playing hide and go seek, and taking photographs of monsters. Some of the missions, however, will take a lot of searching or trial and error to get through. Since it is the only place to turn in quests, stock up on items, and refill the health and heart meters, the town plays a central role in the game.

While it brings a lot to the table, Castlevania: Order of Ecclesia also has a number of frustrations. First, the instruction book gives very few details about the game. Players wondering about the effects of some of the statistics in the game will find no answers there. Worse, failing to fulfill a specific objective of the game can result in a “bad” ending. The fact that this objective required hunting through huge areas for hidden rooms that are not easily seen only increases the aggravation of eventually having to replay for the “good” ending, which adds even more length to the game. 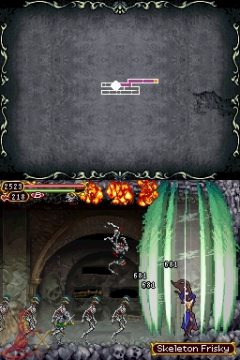 The story tying all of this action together leaves much to be desired. Shanoa loses her memory and emotions near the beginning of the game. As she interacts with her mentor and the villagers, she comes across as just another stereotypical amnesia-stricken character found in a number of RPGs. Some character development aspects do not even begin until near the end of the game. As for the villagers, the player will care more about what services or goods they offer in exchange for their quests than what stories they share.

For years, old time gamers have lamented what Castlevania II: Simon’s Quest could have been. It was the first Castlevania game with a central town, and outdoor areas. Unfortunately, it was riddled with bugs and quests that could only be solved with a copy of Nintendo Power in hand. Castlevania: Order of Ecclesia is the answer to players’ cries. With great graphics, an unparalled soundtrack, an updated battle system, a ton of different areas, and a town hub, this game goes a long way to resolving those hurt feelings. Unfortunately, it also brings a couple of skeletons from that closet with a few frustrating game design decisions that will perplex the average gamer. While worthy of the Castlevania name in more ways than one, it does not top recent handheld iterations or the famous Symphony of the Night. However, it is still a very enjoyable game, especially for those who do not mind looking a for a few hints online.