Not in the Way of Sir Robin

While Square Enix still appears focused on continuing its long-running RPG series, it has allowed a new team at Silicon Studio featuring staff that worked on 3D Dot Game Heroes and many of 5bp.’s visual novels to get its crack at producing one of its own. This new team has created Bravely Default, a game featuring an interesting blend of traditional turn-based gameplay and modern ideas and accessibility. Finally reaching western RPGamers under the For the Sequel enhanced version, which has allowed some features to get polished up and for the game to become even more friendly to its players, Bravely Default combines modern and classic quite masterly to deliver delightful play from start to finish.

Bravely Default‘s story focuses on Agnés Oblige, the vestal in charge of looking after the wind crystal, one of four whose power seems to keep the world ticking over. Unfortunately, a darkness has suddenly appeared and overwhelmed the crystals. With the cryst-fairy Airy in tow offering advice on how to fix things, Agnés sets off to release the crystals. After paying a visit to investigate a chasm in the nation of Caldisla that appeared at the same time the crystals were compromised, Agnés quickly manages to pick up three companions: Tiz Arrior, the only survivor when his village of Norende is swallowed by said chasm; Ringabel, a suave amnesiac who carries around a journal that appears to detail the group’s future travels; and Edea Lee, a new member of the Eternian forces seeking to stop Agnés’ efforts to awaken the crystals who decides to switch sides and join Agnés’ quest. Despite Tiz and Agnés probably being the main protagonists, compared to Ringabel and Edea they manage to feel a bit subdued, as the latter two easily manage to steal the majority of scenes.

For a large chunk of the game, the overall story feels a bit straightforward, but there are still plenty of interesting twists and turns with the latter portions of the game bringing an excellent level of well-handled intrigue to the story. Bravely Default‘s world and the rest of the cast help things too, being an interesting and engaging bunch. The main party is full of charm and really helps to keep things moving along and hold the player’s interest. This charm is helped along by Party Chats, which take a leaf straight out of the Tales series’ skits; oft-entertaining side conversations between party members help to fill out the characters and build a sense of camaraderie between them. The game isn’t afraid to mix things up every now and then, and is willing take inspiration from unexpected sources. Bravely Default features two endings, one of which is considered the “true” ending. Thankfully, saving the game after the credits roll lets players reload before the ending is determined so they won’t have to go through the whole thing again to see both. 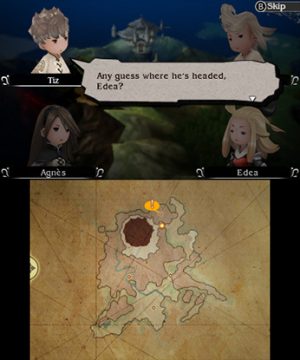 Perhaps towards the big quest marker?

Bravely Default‘s battle system is based on the standard turn-based template but features lots of twists and add-ons that build it up into one of the best going. At its heart is the BP system, which allows characters take multiple actions in a single turn. Every active combatant is granted one BP at the start of each turn, with any action automatically using up one BP. Combatants can decide to “Brave”, stacking another action up to a total of four in a single turn. Going all-out has drawbacks, however, as anyone with a negative BP on the next turn cannot take any actions and is left defenseless. Combatants can instead choose to take a more defensive option and “Default”, saving up their BP and taking reduced damage. In addition to helping negate powerful attacks, this grants players a future opportunity to take multiple actions without fear of leaving that character unable to defend themselves afterwards. The BP system adds a huge level of strategy to the game, bringing in a bigger focus on defense and overall tactics, and doing a great job of keeping players on their toes.

Also helping the strategy is the large number of jobs that the player’s party can use and customise their members with. Each character can set one main job, which affects their stats, weapon proficiencies, and which abilities they can use. Further abilities are unlocked with each job level gained. Players can further customise and enhance their characters by setting an additional job to use any unlocked abilities from, as well as a select number of the passive skills that character has unlocked from any job. These include a mixture of old standards and some fresher takes, such as the healing-focused White Mage, party-buffing Performer, and counter-attacking Swordmaster. Characters’ special moves are another area of customisation for the player, including adding elemental attributes and higher damage against specific enemy types. The job system works brilliantly, allowing for lots of experimentation in finding the best combination of jobs and abilities and generating plenty of different, yet effective, tactics. 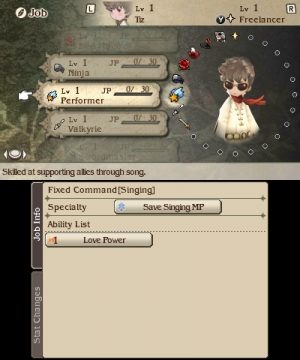 Are your heroes this stylish?

Network functionality is present through unleashing powers or attacks from other players in lieu of their own party member’s action by “Summoning” powers obtained from other players through StreetPass or updating their save data online. When in a tough bind players can utilise Sleep Points (SP), which are earned while the 3DS is in sleep mode (one every eight hours, up to a maximum of three) and allow for a free action at any time during battle by pressing the Start button. Players are able to buy additional SP online through microtransactions, but their requirement in battle is so rare that doing so must be considered a waste of money.

Side quests mostly feature opportunities to unlock new jobs, which happen when the particular boss with that job is defeated. They are, however, pretty substantial and quite closely connected to the main story quests, helping to add in a lot of depth to the world and its antagonists. One of the game’s other main bits of side content involves the rebuilding of Norende. Players instruct villagers to build and enhance various shops, which unlocks new items to buy from dedicated save points and new special move options, or battle special monsters that attempt to intrude upon the village for some additional rewards. It’s a bit disappointing that there isn’t an opportunity for Tiz and company to actually visit the rebuilt village and see it properly brought to life, however.

User-friendliness abounds in Bravely Default. The game does a good job of keeping players on track with their next objective, having both clear markers on the world map and Airy mentioning the current objective on the menu screen. Players are able to adjust multiple aspects of the difficulty, such as the battle difficulty and the random encounter rate as they desire. The balance on normal difficulty feels very solid for the majority of the game, although it does have a couple of significant spikes towards the latter stages. Those that do feel a need to level themselves up a bit can do it a lot quicker thanks to the ability to greatly speed up battle animations and an auto-battle option. Boss fights in the game are excellent, always granting a great sense of occasion and requiring good strategy in both offense and defense. Autosaves when entering a new location or dungeon floor are another welcome feature, keeping progress loss minimal upon a defeat. 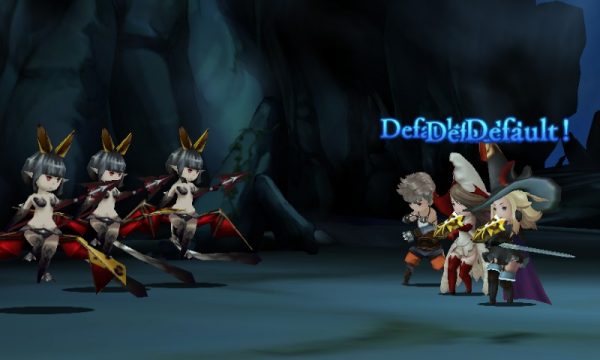 The soundtrack, composed by Revo, is excellent, especially on the more fast-paced tracks. It’s often tempting to just leave the game alone for a few moments to give many of the tracks a full airing. There is a bit of repetition in some of the dungeons, but fortunately the tracks are enjoyable enough for this to not be an issue. The English voice-acting on the whole is very good, although perhaps not amongst the very best in recent years. The performances for Ringabel and Edea are particular highlights, but there are points where Agnés’ voice does become grating. Players do have the option to select the Japanese voice-acting should they wish.

Probably the least impressive part of Bravely Default is the visuals. There isn’t much to complain about, but it’s one of the few areas where the game doesn’t stand out. The somewhat chibi character models don’t do a particularly good job of conveying emotions most of the time. Dungeons are also rather underwhelming on the visual front, albeit the designs keep them enjoyable to explore. Non-dungeon locations look pretty nice, utilising a layered painting theme very well, but are all small and often just lack a little extra touch of life.

Bravely Default is a triumphant blending of a classic template with some fresh ideas and modern user-friendliness, albeit with a few areas that could still be refined before going on to the next level. The only issue I may have with the game is that I can envision it making it harder to enjoy older turn-based classics that were forced into shortcomings on the user-friendliness front, such is the high level that Bravely Default‘s gameplay has achieved. But one can hardly give the game any fault for that. There are plans for Bravely Default to become a series of its own, the sequel Bravely Second already being well under development, and it’ll be interesting to see how things are improved from an impressive initial outing.