Companions to the End

The pace of RPGs coming out for Sony’s PlayStation Portable is picking up, and with it comes a lot of experimentation on what gamers want now days. A lot of this experimentation has resulted in low review scoring, however, and sometimes it’s best to get back to the basics. Brave Story: New Traveler does just that, offering a traditional, story-based linear RPG through and through.

Our hero is a young boy who loves his video games. So much so, that he spends more time playing them and less time paying attention to his friend, Miki. Miki storms off, after telling him thus, and our man thinks little of it. When he does go after her, he finds her lying on the ground, unconscious. They’re rushed to the hospital where the doctors find they can do nothing for her, and they simply must wait and see. Feeling utmost despair, the boy runs to the roof of the building, where he hears a voice–a voice of hope. A door appears and he’s given a choice. If he can survive a most arduous task, in another world, he will be granted a single wish. Wasting little time, the boy decides he must go, for Miki’s sake. He enters the door and travels to the world of Vision. Here he is labeled a Traveler and tasked with seeking out the five gemstones in order for his wish to be fulfilled.

The populace of Vision is equally varied, with many different races. There are the humans, of course, but there are also many others, such as the Waterkin, a reptilian race; or Kitkin, a feline race. Each race is distinct in appearance and gives the world a fantasy feeling. Our hero will be joined by many different people during his quest for the gemstones. Some will stay, some will go. Since the story is indeed as linear as possible, the party is predetermined at each point. However, since there can be six in the party and only three active in battle, there’s still room for some customization.

The hero must always remain in the active party, one of the most disappointing aspects of the game. The longer other members stay in the active party, the more Unity skills they learn. These skills are teamwork attacks, but unlike other games, using them does not use up the other character’s turns as well, though it does use up an equal amount of Brave Points (BP) from all participating characters. BP is consistently recovered by doing damage, but only the character initiating the Unity will recover BP from the attack. Since Unity attacks are powerful, this prevents using them all the time. 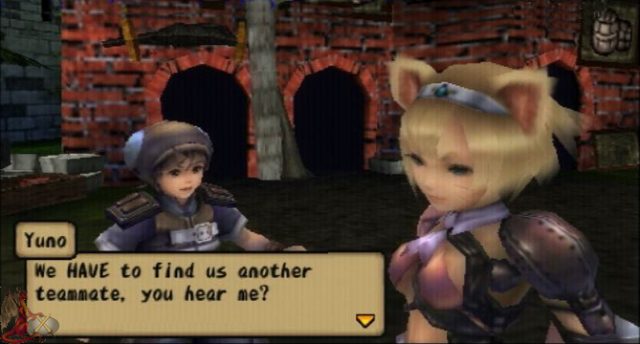 Deciding who goes into battle should not be entirely random. The game is designed so that one person has a distinct advantage over the monsters of a particular area. While it’s not always clear at the beginning, as soon as one attack is labeled as “Tribal,” that person and weapon’s attack will essentially give critical damage every time. It’s still possible to score a critical hit with such an attack, but the common enemies won’t survive a Tribal hit, regardless. This is not essential, but it does give another reason not to stick with two main alternates, despite learning Unity skills.

The world of Vision is vast, with many kinds of terrain and obstacles. Worst of all, no one knows where the gemstones lie. If the story wasn’t linear, it would likely take quite some time to track down each one. Instead, they seem to fall in our hero’s hands quite easily. Each mysterious sign of power or disturbance is typically caused by a gemstone. The party gains respect from the people in Vision and procures the gemstones at the same time. With this respect, they are able to join a group of peacekeepers known as Highlanders. Highlanders are able to roam freely between Vision’s different countries, helping people in need. Best of all, Highlanders get paid for slaying monsters. Since monsters don’t carry any money, and their loot isn’t highly profitable, this removes a need to mindlessly grind to make enough money for the next set of equipment.

The only equipment that can be purchased is a weapon, for everyone except the hero, and one defensive item. Each character has a specific set of armor, though some are as miniscule as gloves or a skirt. The other three pieces of equipment are crafted. Using the loot from the monsters, and diagrams found around Vision. There are sets of diagrams, such as Sorcery, Immunity, Bravery, and more. Each craft in a set does the same thing, but the higher numbered diagrams do it better. Best of all, when a crafted item is dismantled, all the materials are returned. This allows for complete experimentation without the worry of using up that one-of-a-kind item.

These items help enhance the character’s role in battle. Each character has a specific class in mind, based on stats and weapon, and while the crafts are powerful, they do not do enough to alter this class. The best choice is to enhance their natural abilities. Magic users can use more BP, fighting classes need more strength and HP. There are also items to increase drops or lower surprise attacks. How effective these are is hard to say. 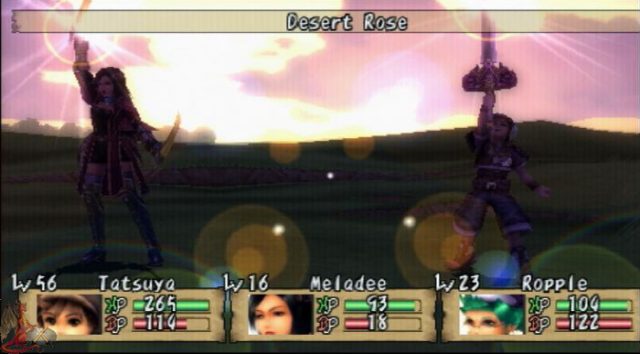 Battles are typically encounters with multiple monsters, encouraging the use of Bravura and Unity skills. The decision to fight them one at a time, taking time and damage, or use a skill to clean them out is one that will have to be made repeatedly. Since the BP gain is slow, and healing skills much cheaper than attack spells, it’s usually better to fight it out, for endurance sake. Once in a battle, the three characters are all that can fight. Should one fall, they cannot be swapped out until the battle is over. If they all fall, the game is over.

Battles are where the graphics truly shine. The characters and monsters charge quickly when it’s their turn to attack, providing a color-filled word to describe the sound of attack when it connects. There are many of these, but they stay consistent with a specific weapon on a specific monster. Spells and other Skills are also very vibrant and appealing to the eye. The best part is that when characters have their typical battle cry for a skill, there’s a variety of phrases used. This is an improvement many other games could, and should, easily embrace.

No traditional RPG would be complete without a mini-game, and Brave Story is no slouch. The party quickly learns about the Social Network of Bird-Lovers, or SNOBs as they call themselves. In various remote locations in Vision, goalfinches can be found and captured. To do so, the hero is placed in a small cage with a net and some birdseed. The goal is to catch as many birds as you can in the time allowed. Each caught bird gives a stat increase to the final goalfinch. Feeding them birdseed will make them grow larger, increasing that stat. Once time expires, all the bird stats are added up and a single bird is fused. Sometimes, the bird can undergo mutation, giving it a white or black color, as well as enhanced stats. So what’s the whole point? To battle the birds against other SNOBs. Each dungeon has a SNOB who is just itching for a battle. If you win, you gain their goalfinch feather, which is used for special crafts. As a proper mini-game, it adds nothing to the story, and is mostly for fun and enhanced items.

Our hero’s journey through Vision can be as fast or as slow as he makes it. There are ample quests for those who want to dally. There’s a quest book built-in to keep track, as well as a monster book to keep tally on which monsters drop which items. This becomes very important when trying to make the latest craft. This also adds to the longevity of the game once it’s been completed, so there’s no need to delay the story unless you want to. The optional quests do help in level grinding, as there’s something more to do than kill mindlessly.

Brave Story: New Traveler is just what the doctor ordered — a well-developed, story-driven RPG. With lovable characters, and a story that just won’t quit, the game is an enjoyable experience. The abundance of quests, the bird mini-game, and the vastness of the world never leaves the hero having to mindlessly level up to progress. The graphics and music keep the game entertaining. It’s not a game that will make people rush out and pick up a PSP, but for those who already have one, it will be a welcome addition to their library.