Last year, Fallout 3 was the buzz of the RPG world, and it quickly gained the affectionate title, Oblivion with Guns. If that’s true, then the same comparison can be made of Blizzard’s Diablo series and Gearbox’s recent shooter/RPG hybrid Borderlands. Many shooters these days adapt minimal RPG elements in order to provide a sense of character progression, but Borderlands takes the opposite approach, taking the classic dungeon-crawling, loot-gathering formula, and throwing in “a bazillion” guns, creating an addictively fun RPG with all the action-packed frenzy of a classic shooter.

Although the story of Borderlands is quite minimalistic, what’s there is absolutely hilarious. The game’s simple plot line sees you, one of four adventurers, landing on the backwater planet Pandora in search of the mythical Vault, a supposed storehouse of ancient alien technology. The planet is not a friendly one, filled with bandits and dangerous creatures, but you’re guided by a mysterious Guardian Angel that broadcasts a fuzzy video signal in front of your eyes. The plot takes a few predictable twists and turns, but the quests and audio logs that tell the story are always chock-full of humor and pop-culture jokes. Whether it’s Patricia Tannis’s ongoing lover’s quarrel with her audio logbook, game mascot Claptrap’s pathetic yet strangely endearing cries of pain, or a quest to kill Jaynis Kobb in Jaynistown (a reference to an episode of Firefly), the game provides constant entertainment value.

Like any good dungeon crawler, the loot is the real reason to play Borderlands, and it doesn’t disappoint. Taking cues from both Diablo and traditional shooters, weapons are divided into multiple categories and subcategories. There are pistols, revolvers, sub-machine guns, machine guns, sniper rifles, shotguns, and rocket launchers, and each of these are divided further into brands, each of which have different focuses, be it magazine size, fire rate, accuracy, or power. To finish it off, each weapon can have a number of different potential modifiers; scopes, increased damage, improved reload speeds, faster firing rates, better accuracy, and so on. There are also four elemental effects to be found: corrosive, explosive, incendiary, and electrical. With all these potential modifiers coupled with a rarity system similar to World of Warcraft‘s and item levels, the number of weapons available is absolutely staggering. Players can also find different types of grenades, shields, and class modifiers to further add to the loot potential. 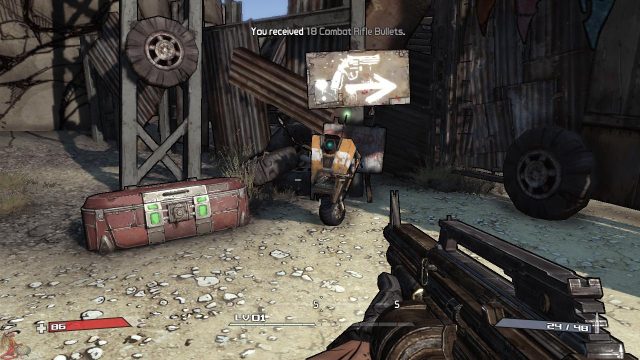 The combat is actually fairly straight-forward; a run-and-gun shooter with minor tactical considerations and fairly simplistic AI. Melee enemies and monsters will run up to you and try to bash you, while ranged opponents will shoot from a distance and make use of cover. Some enemies will use strafing tactics to approach. Every enemy has some zone on their body that will cause a critical hit when shot, drastically increasing the damage dealt. For human enemies it’s the head, but others have more unusual areas to try to hit. Some enemies have armor-plating that’s resistant to bullets while other, powerful enemies simply have significantly more health, leading to longer battles. Elemental effects come into play as well, as each have their uses. Corrosive weapons damage armor, making subsequent shots deal more damage, while incendiary weapons deal massive damage to fleshy enemies. Electrical weapons do enormous damage to shields, but have less effect on flesh.

Unlike most shooters, however, your character level and equipment strength plays a major role in how well you’ll fair in battle. You deal less damage to high level opponents, who consequently deal more damage to you, so typical RPG strategies apply as well. Sometimes a level or two is enough to change the balance of a fight, regardless of tactics, and this will likely give the game much more appeal to those who don’t typically partake of the shooter genre. Similarly, the game is much more forgiving of death than a typical shooter. Rather than restarting at a checkpoint immediately, the player has a few seconds to finish an opponent off, thereby getting a second wind, restoring your shield and a portion of your health, although this can often be harder than it sounds. If you do fail to get a second wind and die, you’ll restart at a nearby checkpoint and lose a small percentage of your cash on hand. However, any enemies you’ve managed to defeat in the meantime, with a few exceptions, will remain dead, allowing a bit of brute-force strategy should you be having troubles.

The game has four character classes, represented by four unique characters: Roland, the soldier; Mordecai, the hunter; Lilith, the siren; and Brick, the berserker. Roland specializes in machine and shotguns, while Mordecai enjoys long-distance combat using pistols and sniper rifles. Lilith is an expert with sub-machine guns and elemental weapons, while Brick… well, he likes to punch things. And blow things up. Each character also knows a special skill that can be activated roughly once or twice a minute. Roland lays down a gun turret that attacks enemies and provides instant cover, Mordecai has a pet bird that swoops down to attack enemies for major damage, Lilith can turn invisible and move more rapidly in the process, and Brick can temporarily become a powerhouse, reducing damage taken and significantly increasing melee damage dealt. Each character has three skill trees to work through, and players can customize each to their own liking depending on their playstyle. 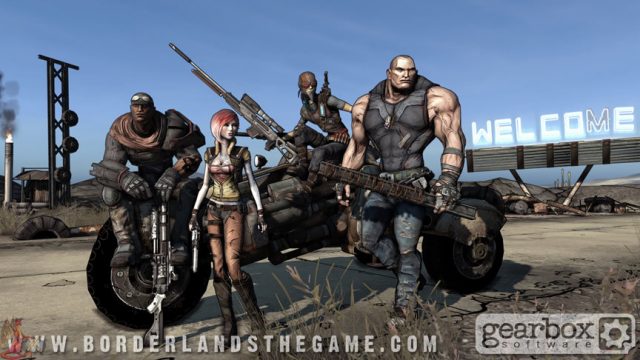 The world of Borderlands is immense, spanning a copious number of zones linked together by a fast travel network unlocked midway through the game. There is also a vehicle system to make travel through the zones faster, so it generally won’t take more than a few minutes to make your way across any map. Unfortunately, the game’s heads-up display only provides a compass, but no minimap, which may lead to regularly opening the menu to get your bearings. Vending machines are scattered liberally throughout the world, selling medical kits, ammo, and equipment should you need them. Fresh ammo supplies can be found almost everywhere, and rare, ammo-regenerating equipment can be found to supplement your supply.

One of Borderlands‘ best features is its visual face. Making use of a terrific cartoon shader, Borderlands sports the classic “brown is real” style of modern FPS games, but with a much brighter and more vivid palette. With experience and damage numbers popping up over enemy heads, the game has a comic-book inspired style to it. There are occasionally texture-popping issues, but they are rare and hardly noticeable. Enemy designs are equally terrific, featuring bizarre creatures, masked psychotic midgets, hulking bruisers, and other similarly grotesque and equally terrific opponents to blow away. And boy to do they get blown away. Limbs fly off, bodies and heads explode into gooey piles of blood, faces melt off; all manner of delightfully twisted deaths await those who stand in your way, and particularly brutal ones may be accompanied by a mocking voice recording from your chosen character.

The voice acting is extremely well done, featuring mostly over-the-top actors who really ham up their respective roles. Characters like Dr. Zed, Crazy Earl, and Scooter have a terrific redneck country hick sound about them, while others like Patricia Tannis or Helen Pierce have a slightly more intelligent, if slightly deranged, sound to them. The best, however, is unquestionably the game’s adorable mascot robot, CL4P-TP (or Claptrap), whose friendly greetings, paranoid ramblings, and pained moans are a sheer delight to listen to. Borderlands‘ music is also quite good, featuring mostly heavily rhythm-based pieces. They provide a great atmosphere for combat and exploration, but don’t really stand out in any way.

There isn’t really much more to say about Borderlands, as it’s a fairly simple animal. Taking elements from shooters and dungeon crawlers, the game blends them flawlessly into a terrific experience that’s an easy sell for anyone who loves either. It’s also one of the few console RPGs with a comprehensive multiplayer experience, featuring online, system link, and split-screen co-op. Plowing through the game’s story could be done in a fairly short time frame, but will last most people close to thirty for a full playthrough, leaving time for exploring, grinding for loot, and completing the huge number of quests throughout the game. And with multiple character classes to choose from as well as additional difficulties (and more loot) for higher level characters, multiple playthroughs are certainly viable. Who would have thought that a trip to a desert wasteland would be some of the most fun I’ve had all year.