Not Much Forest, A Bit More Story

This past weekend, I decided I felt like starting a new console game. Of course, for me “new” is a relative term. The game I ended up choosing was Blue Forest Story by Right Stuff, copyright 1996. That’s the same studio that made Wing of Alnam, which I had mixed thoughts about, to say the least. BFS manages to be a better game than its predecessor, not to mention far shorter. From start to finish on the first time around, I spent seven hours on this game.

Normally, if an RPG is that short, it suffers most in the story department, but oddly enough that’s not the case here. If anything, the story in BFS is extremely compressed, skipping over large sections of travel time in order to get to the next plot point. This is especially apparent if one chooses to play from the viewpoint of Rakjit, the female protagonist of the game, instead of Valerus (the male lead). Instead of trying to tell two intertwining stories, or even regularly alternating points of view, BFS revolves around Valerus with only a few bits of story pertinent to Rakjit only. Unfortunately, this also means that her part of the story gets put on hold while multiple events occur for Valerus. There was no real need to split the two narratives at all, considering how much gets lost on Rakjit’s side.

Either way, the player is going to be left with the feeling that there’s a lot more to the setting than what is seen. There’s offhand mention of gods and demons, ancient wars, and entire nations that remain just that — mentions. The basic premise is that every once in an age, demons fall from the dark moon to invade the world, only to be repelled by the forces marshalled by the gods of the bright moon. Far in the past, the gods even created a new race, the Mazoku, by instilling some demonic essence within chosen humans. Far more recently, the Wind God sacrificed himself in body and soul in order to contain a powerful demonic presence. Now, a fanatical cult that worships the demon moon seeks to undo that sacrifice. 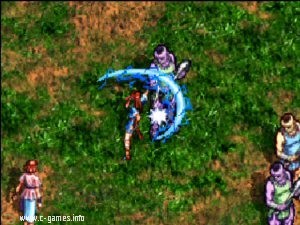 Battles in this game are mercifully fast, especially once Rakjit and Valerus learn multi-target attacks. This is good, because BFS crams about as much combat in as it does story. At times the encounter rate verges on one every three steps, though those times are brief. There are a few more details that make the experience interesting in the annoying sense. First, there are no magic points; all spells cost HP to use. The only real effect this has is to prioritize items and attack skills, which don’t cost anything to use. But then the game drops a third wheel character into the last two boss battles, one who can do nothing but pray, cheer, or use healing spells. Thank goodness those bosses are pushovers, after all the necessary grind just to get to them.

The second annoyance comes in the form of weapon durability. This is rarely a good idea in any game, and BFS stands as a particularly poor example of its implementation. All weapons except for Valerus’s ultimate have a ranking of A to D to indicate their current condition, and if they break then they’re obviously useless. However, the letter ranking has little connection to the breakage rate. A-condition blades are just as likely to break as D (and in fact did so more frequently for me). Broken equipment was still an infrequent occurrence in the seven hours I spent on this game, but it certainly teaches the value of keeping backups in the game’s limited inventory space.

Aside from the fancy-shmancy CGI intro animation, Blue Forest Story is done entirely in sprite-based graphics, and generally looks like it has more in common with SNES games than the early PSX era. This actually works in its favor, as the sprite style has definitely aged better in the last twenty years. Out on the field, bobble-heads prevail, but in-battle sprites are much better detailed and articulated, which goes well with the variety of skill animations. The biggest oddity about the game’s graphics is actually a matter of T & A. This is the only console game I’ve ever seen with visibly topless sprites in a hot spring scene (even if they were bobble heads), and the penultimate boss’s big demonic apotheosis turns him into what’s essentially a head and a tail connected by seven monstrous mammaries. The transformation sequence actually has two of them erupt through the front of his chest, which gives a whole new twist on the word “pneumatic”. 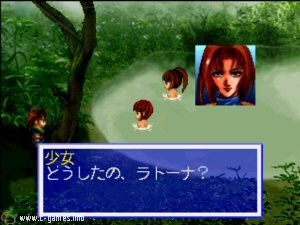 One second later, Rakjit turns and flashes the player. Seriously.

Unlike Wing of Alnam, Blue Forest Story does not bother with voice acting, and is all the better for it. The music is reminiscent of mid-period SNES soundtracks, so it’s not bad or anything. It’s just of a piece with the rest of the game. It fills the space provided, adds a decent backdrop, and with the quick play time it doesn’t get played overly much.

I wish there was more I could say about this one. Much like the other Right Stuff titles I’ve looked at, it’s a case of lots of ideas crammed into a space that doesn’t really fit them all in. At least in this instance, the developers managed to make the game easier to look at and with a more manageable interface. There are definitely worse games out there, because I’ve played them. There are also definitely far, far better games out there to waste time on. At least the total amount of time wasted isn’t much.