Beyond the Beyond Retroview

From the World Past Hope and Fear

Once upon a time, the Sony PlayStation was not a welcoming home to RPGs in North America, and Bernie Stolar’s preference for action-oriented polygonal titles extensively colored the system’s lineup. Relatively young developer Camelot was also seeking a new audience for its titles, which had previously been on Sega’s platforms. The story of how Beyond the Beyond made it out of Japan and onto the North American PlayStation is probably an interesting one for these reasons, especially since talking about it affords a chance to not play the game in question. This is the only RPG Camelot ever made that didn’t see release on a Sega or Nintendo platform, and also may just be the worst thing in the company’s history.

Considering it came out in Japan in 1995, Beyond the Beyond understandably looks and plays like a 16-bit RPG. Random hordes of enemies will pester the player in turn-based combat throughout, and fighting is similar to many other concurrent titles, though Camelot decided not to let individual enemies within groups be targeted for attack. Beyond the Beyond made the strange decision to give characters statistic gains almost identical to what would be seen in the Genesis Shining Force titles, meaning that without frightening levels of player dedication no one in the party will have HP in the triple digits by the end. Characters instead gain something called Life Points, which kick in when HP are completely drained. Characters with no HP stand around for a round in a dizzy state, then revive with a random percentage of HP restored and fewer LP. This method is annoying and far more time consuming than simply having higher HP would have been, and the random amount of HP regenerated makes planning fights much harder.

Randomness seems to have been Camelot’s watchword when making the combat engine, as it governs far too many aspects. Characters can attack twice, use super powered strikes, block enemy blows, and counterattack physical strikes, but making any of these desirable things happen is governed by invisible rules of chance. The process involves mashing on the X button, perhaps concurrently with motions on the D-pad. Sometimes it works, and sometimes the player will have expended real life energy for no tangible result. Enemies can also block, counterattack, and hit with second strikes, but whether their doing so is affected in any way by the player’s furious controller machinations is a mystery only Camelot’s programmers can solve.

By the standards of the time, Beyond the Beyond‘s inventory was adequate but no more. The passage of many years has made dealing with the need to constantly shuffle items between characters due to restricted carrying space harder to excuse, and the refusal of the game to say what things do even after finding out the hard way is a glaring issue. Having exactly one place in the game to toss extra inventory means taking advantage of this feature is a colossal annoyance. Instead of any conventional warping spell to travel quickly, this game clutters each character’s individual menu with an additional item that allows a far more cumbersome method of movement to where someone not currently in the party is located. In a similar vein, the game keeps certain items exclusive to a few towns for purchase, demanding a backtrack every time portable magic replenishment is desired. The localization is also occasionally baffling when naming the opposition, with the player fighting such nonsensically misspelled enemies as Fenril and Ekidona. 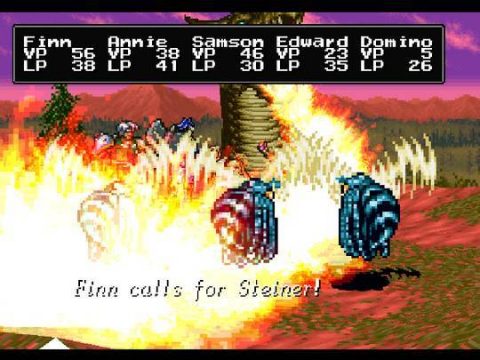 Dare I ask where exactly Steiner’s body is? Did he go underground?

Guidance to the player was not expected all the time in mid-90s RPGs, but Beyond the Beyond does a poor job even among its contemporaries. The most common situation is to be presented with a vague goal, and then be expected to blunder around the world map until the right location to accomplish it is discovered. A good example comes in the game’s second half, when the villains declare their next target to be a place the player has never heard of. Finding this place only results in being directed to another place the player has never heard of in order to perform the Camelot staple of a class change, and after accomplishing this task a return to the source of the events finds that the villains have come and gone in the interim. The next goal is also vaguely stated with little direction, and the presence of a very thorough FAQ helps immeasurably in dealing with these challenges.

Beyond the Beyond does feature a few ideas that other developers could rip off in its dungeons, which implement a number of interesting mechanics. Needing to carry water around to grow parts of a giant beanstalk, bouncing between differently-colored mushrooms that shrink and restore the party’s size, maneuvering past statues that pull characters onto opposite sides of a river bank, and being bounced upwards by spider webs that act like trampolines are solid examples of the nifty notions found within. It’s too bad that they’re surrounded by a random encounter rate high enough to guarantee the player will end up in frequent battle.

Narrative was not usually the selling point of RPGs when Beyond the Beyond came out, but considering some of its contemporaries’ stories are fondly remembered today, something is lacking in this title’s unimpressive tale. It concerns a young man named Finn, who is quickly plunged into a dangerous adventure when an evil empire’s troops attack his kingdom’s capital. Enlisting aid to drive out the imperials takes up a large chunk of the game, and when the fight is finally taken to the enemy’s home base a blatant Final Fantasy VI ripoff occurs. Some ancient prophecies and ostensibly shocking revelations of parentage take place, and the game’s villains turn out to be the aptly-named Vicious Ones. The characters are also quiet most of the time, which makes learning anything about them very difficult.

Beyond the Beyond also includes a plot point that carries over into a long stretch of the game, by cursing a character who is then going to be part of the battle formation. This curse manifests itself as the status ailment often does, by either freezing the character or making him suffer some of the damage he deals to enemies. His curse is not cured for about eight hours of game time, which is at least a quarter of the time necessary to complete this title. 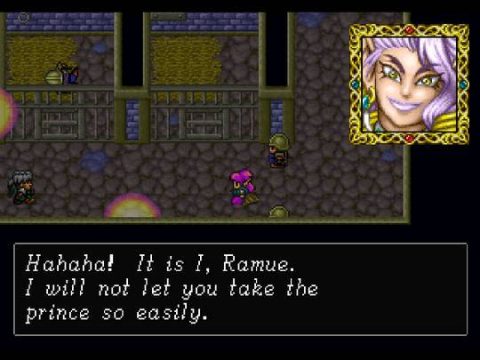 Just as long as you don’t afflict me with your makeup….

Challenging is not the proper word to describe Beyond the Beyond, since with perseverence it is possible to push through even its most aggravating obstacles. Figuring out how to proceed without wandering around for hours usually requires a FAQ, but this too is a surmountable obstacle in the current era. Even the bosses, which stand out from the regular enemies by having HP close to or past the quadruple digits where no regular enemy has more than 100, are beatable with patience. The final boss, which has several thousand HP and requires many turns of pounding to defeat, is a particular irritation but not drastically different from what came before. Generating the will to continue is the problem.

Beyond the Beyond‘s visuals are highly reminiscent of Camelot’s work on Shining Wisdom for the Saturn, meaning that they mostly would have fit right in on the Genesis. A few later spell animations show off pixelated animations beyond 16-bit capabilities, but little in the game pushes the PlayStation. At least Camelot erred on the side of low load times throughout for its animations, which is more than can be said for a multitude of 3D titles on the system. Enemy palette swaps happen constantly, and almost no unique enemy visuals are left to discover by the final areas.

Motoi Sakuraba’s score is very much in keeping with his other work, including themes that sound similar to other compositions he has written over the years. A few of the tracks are quite pleasant, and the variety of battle themes is something more developers should emulate even today. This is not one of his finer efforts, however. The sound effects are slightly better than those the Genesis could have produced, but do nothing to strain the PlayStation’s hardware.

Before starting this game, I was genuinely curious to experience the one Camelot RPG I’d never tried before. Having done so, I now understand why its reputation is so foul. Camelot never made another game for Sony hardware, which could mean the experience was nearly as unpleasant for the developer as it is for the player, and that’s saying something.