Atelier Shallie Plus: Alchemists of the Dusk Sea Review

Pull Me In Tighter

I admit, it took me awhile to get into Atelier Shallie Plus: Alchemists of the Dusk Sea. I have been reviewing the ports for both the Arland and Dusk series for the last couple of years, and it was finally time to tackle the last one. There was a part of me that felt tired after reviewing all these ports, and there was another part of me filled with excitement given that I enjoyed Shallie the first time around. But much like the previous Plus additions, is Shallie a worthy addition?

Atelier Shallie stars two young women, both nicknamed Shallie. Shallistera, the soon-to-be chieftess of Lugion Village, goes out on a mission to find out what has happened with her village’s water supply. Sadly, Shallistera’s convoy goes astray, crashing into the town of Stellard, wherein Shallistera meets Shallotte, a young alchemist dreaming of flight. Together the two Shallies embark on a quest to not only help Stellard and Lugion Village’s water supply, but also embrace their destiny of becoming alchemists.

While the base story isn’t much to write home about, Atelier Shallie shines in its cast of endearing characters and events. There’s plenty of familiar faces from the Dusk series such as Keith, Ayesha, Logy, Solle, and Escha, who now are also playable characters as well. There’s wonderful character interaction and sub-stories, and they easily outshine the larger narrative at play. There’s also a ton of humor, and much of the larger story is rooted in self-discovery, as both Shallies are trying to figure out who they wish to become and what steps they want to take to make their dreams come true. While this story has been done before in the series, it’s still very sweet, and with the likability of the cast, it’s easy to settle in and see where the narrative will go.

Still, this game is a conclusion to the series and that makes it harder to love the main story without taking into consideration what came before it. While the Plus edition has new plot elements added in, including resolving the mysteries about Ayesha, it simply doesn’t add a lot to the overall story. In fact, it feels unsatisfying, almost as though it’s missing something in the grand scheme of things. The localization is identical to the original PlayStation 3 version, which means there’s still the odd typo floating around and at times still reads like a direct translation, for better or worse. 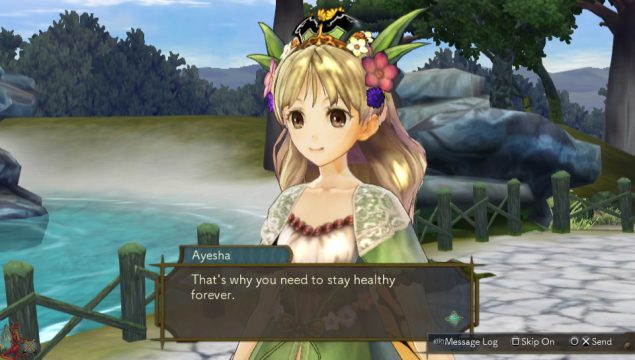 Important advice from a familiar friend.

Even though the narrative is a mixed bag, the battle system is still easily one of the best in the series. Not only does it build off of the base provided in Escha & Logy, but the new additions really enhance the combat experience. The full party of six characters can attack enemies to build up a gauge which triggers a Burst state when filled. In Burst, attack damage is doubled and the player can move through each of the six party members at a time, building up a larger chain of damage. Assists occur when a character from the back row is ready to jump to the front, and with the switch in characters comes an extra attack. If all three characters in the back row have their assist gauge filled, then each can take a turn in the chain providing bonus damage. Tagging characters in and out of the front and back rows makes the combat system fast and furious, so it’s easy to get into a groove of abolishing enemies with ease. There are also Field Bursts, which apply another bonus to the field, such as if a character is KO’ed they will be brought back to life if they are in the front row. Cycling through every assist will net a player a Variable Strike, which provides extra damage to enemies.

In addition to the battle system is the Growth System. Once characters reach level forty, players are able to use Growth Points to customize their characters in a number of ways, be it providing additional HP, MP, Attack or Defense. Growth Points are awarded with each level up, with the player being awarded a handful of them at a time. It’s a very open system that unfortunately comes too late in the game, because it’s definitely one of those systems that would have been more helpful to have closer to the beginning. For what it is worth, the Growth System allows for players to feel as though they have more customization options, which is definitely different from prior Atelier titles.

Speaking of differences, Atelier Shallie has a lot of changes that may jar a veteran fan in that it removes a lot of the core elements from the series, the time limit being the most noticeable. While this is a very noticeable change, it’s actually for the better, as Shallie has excellent pacing throughout, never feeling bogged down or sluggish. All ten chapters have a quick pace about them, and there is always enough movement, making progress rewarding throughout. It also helps that it’s easier for the player to know what is expected thanks to the Life Tasks system, which gives the player a hint as to what needs to be done in order for the story to progress. This is the main source for XP in the game, and depending on which heroine is being played, the goals they wish to achieve will be different as well. The game also has three difficulty modes, which make up for the lack of calendar time, though the game is still quite easy compared to predecessor, Escha & Logy. 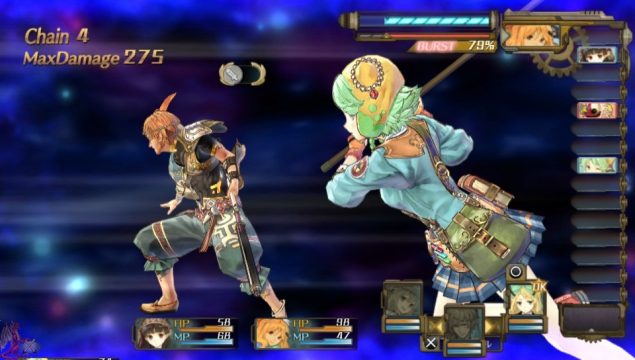 Still, there is a ton to do in Shallie and the amount of freedom, coupled with the relaxed pacing is very rewarding. Even the alchemy system has been simplified enough that players will still find joy in synthesizing items, but without the complication of knowing how a lot of the properties work. The player has a lot more control as to how they want the item’s outcome to look and as the Shallies synthesize more items, more traits and skills can be applied to items making them much more valuable. It’s a very streamlined system that even a newcomer to the series would be able to pick up and understand without it feeling overwhelming or complicated.

It goes without repeating, but Atelier Shallie does have one of the best soundtracks in the series, and is easily the most diverse in the Dusk subseries. While there are some familiar tunes, the newer tracks, including the ones from the Plus DLC are stunning and easy on the ears. Sadly, while the music is the great, the voice acting still varies in quality, making it a very mixed experience. Though if you aren’t interested in having English voices, players can always swap to Japanese audio.

Unfortunately, there are some real issues in Shallie Plus. While it is very much a straight port with new playable characters, costumes, music, and a synthesis rebalance, Shallie Plus easily has the worst framerate of the three Dusk ports. Between the framerate chugging along at times and the amount of pop-in, it really puts a damper on the game’s graphical quality. This is a shame because when the game is running smoothly, it looks wonderful on the PlayStation Vita.

With all the Arland and Dusk games re-released on PlayStation Vita, I am happy to have completed this journey all over again. Replaying the Dusk series in particular reminded me why I enjoy this series so much, and Atelier Shallie has a lot of wonderful qualities, even if it isn’t the wrap up to the subseries that it needed to be. I still maintain that if you are a newcomer, the Dusk subseries is a great way to start, as the learning curve isn’t as high as the Arland games. Atelier Shallie isn’t the perfect conclusion, but it offers so much heart and a grand adventure that it’s almost forgivable.