The Revenge of Gene Eric

ArcaniA: The Complete Tale is the fourth title in the now long-running Gothic series packaged along with its standalone expansion pack. The first entry not from longtime series developer Pirhana Bites, the switch in developers seems to have brought a great slew of technical issues to the table and not much else. This action RPG seems to attempt the feel of a grand Bethesda-style world, but ends up just feeling linear and often broken given some of the glitches that can occur when players try to wander from clear paths. Even without the glitches, the game doesn’t offer much other than an uninspired fantasy tale along with some occasionally enthralling combat. It’s a shame, because there are some ideas in ArcaniA that could have come together to make a much better game, but developer Spellbound wasn’t able to make good on it.

There are problems right away with the story. After describing a greater conflict, ArcaniA drops you into the role of the protagonist living on a peaceful island amongst the world’s southern seas, where the previously described wars are raging. After some tutorial areas your typical fantasy tragedy happens and its off for revenge against the king whose army is responsible for the tragedy. Of course such a generic beginning would be forgiven if the rest of the story went somewhere, but instead the protagonist just ends up as an errand boy for the various characters blocking his progress towards the king and his revenge. The plot eventually takes some interesting turns by the end, but it’s too little too late. The voice acting doesn’t help either, as the actors fail to bring any emotion or excitement to the script at all. The game does let you skip the original game and start from the standalone expansion. However, the expansion’s story serves to tie up the loose ends of the original, so it won’t make much sense on its own. The story isn’t completely without merit as the late game shows at times, but its completely ruined by the boring beginning and middle. 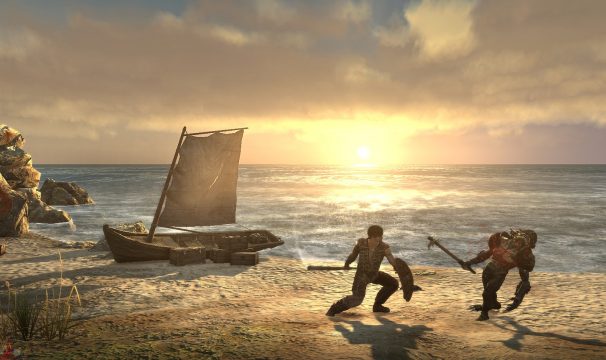 Hack your way to victory!

Similarly, the gameplay itself is an uneven experience, though thankfully the good is divided throughout instead of back-loaded at the end. ArcaniA features simple magic, archery, and melee combat systems but allows the player to fluidly switch between them to keep things interesting. Each of the systems also evolves as you place skill points into them. For example, the game’s three spells add the ability to charge and inflict enemies with various status ailments. Blocking and dodging are also available for some defensive options. The third-person perspective provides a perfect viewpoint for using these options to carefully and enjoyably take down large groups of enemies.

The problems come not from the core battle system, but from the enemies, their AI, and the construction of battle scenarios. Enemy AI does a poor job of blocking and dodging, and usually heavily telegraphs any kind of strong attack. This means single enemies can often be taken out simply by mashing the attack button, with an occasional dodge or two. The game makes up for this by throwing groups of enemies at the player. Surprisingly, this actually works quite well. Against groups of enemies, especially a mix of melee and ranged fighters, players are forced to use every available ability to carefully take them down. When these encounters are just groups of easy enemies they still prove to be engaging as being ganged up by any kind of enemy can easily lead to the player’s defeat. It’s a shame then that ArcaniA never fully uses this to its advantage. Random encounters while traveling outside usually fall into the boring variety, and even though the game uses groups more as it goes along the quality of encounters is uneven. 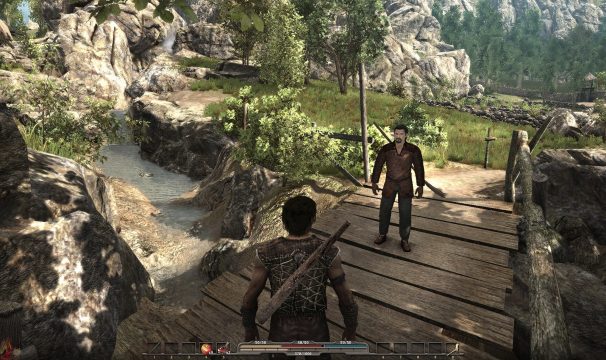 If only the game looked this good in motion.

Outside of combat there isn’t much to do, which makes these issues even more frustrating. There aren’t many areas to explore for side quests and since the main quest nets a variety of great equipment, there’s little incentive to travel off the beaten path. There are a number of instances where choice comes into play, usually choosing from a small number of quests on how to get around a certain obstacle. Similar to the sidequest issue, there’s no real incentive to pick one over the other. There are no complex moral choices to be found, just a matter of picking one dungeon or fetch quest over another.

To complete the issues of ArcaniA, graphics and music are a major disappointment. There’s little to no music in general outside of a few good, but generic, orchestral pieces that show up in the main menu and in battle. None of the music is bad or grating, just utterly forgettable and fails to add anything to the experience. The graphics fare far worse. Looking like a relic of early 3D PC RPGs, ArcaniA doesn’t have much in the way of unique and interesting textures or 3D modules, and suffers from a terrible draw distance and other graphical glitches that you don’t often expect from a PS3 game. Worse than the superficial issues are the many glitches that can occur. Many areas off a main path seem to have been designed to be inaccessible, but instead of just being unable to walk on them the player will simply get stuck or fall off, sometimes off of nearby cliffs to their doom. Monsters similarly seem to teleport around battlefields if there are any sorts of obstacles they can get stuck in. ArcaniA is just a mess from a technical standpoint.

ArcaniA is just an altogether frustrating experience. Its few good points fail to shine through in any way thanks to the vast number of technical and design issues. Even a fun battle system can’t do much for the game other than highlight even further the wasted potential. Already facing a tough challenge to gain attention with the likes of The Witcher and The Elder Scrolls out there, ArcaniA comes off as an overly generic fantasy adventure that is so uneven and glitchy that an included expansion pack seems like a punishment rather than a bonus. Only those absolutely in need of a new RPG need apply here.