There is a lot to love in how welcoming Reborn is with its modern improvements.

Remaking a game twice may seem excessive to some, but Tactics Ogre is particularly special for RPG fans. Tactics Ogre was initially released in 1995 on the Super Famicom, before coming to North America in 1998 through its PlayStation port. It was later remade for PlayStation Portable, hitting Japan in 2010 and North America and Europe in 2011. In this reimagining, Tactics Ogre: Reborn is a melding of current-generation technology with the original’s phenomenal tactical combat system and its devastating story about the horrors of war. Square Enix has given RPGamer the pleasure of sharing an impression of the first few hours of the game, and while veterans of the series will likely love all of the improvements made, a key question is how the game will fare for newcomers.

At the beginning of the game, the player is asked five difficult questions associated with tarot cards, which determine their base stats. These questions offer a variety of scenarios, though the one that stuck out for me was “Who would you save? Your beloved or your child?” These questions make the player think about their choices, and they do a great job of providing an appropriate impression of the kinds of difficult choices that will be made throughout the game.

Tactics Ogre‘s story focuses on the horrors of war and the way in which every decision has a consequence. In the beginning, players are introduced to the war on the Valerian Isles, an area with a long history of bloodshed. There are three groups: the Bakram, the Galgastani, and the Walister, each with their own desire for power. While the isles were at one point peaceful, the death of Dorgalua Oberyth Valeria caused a stir in the realm, as there was no heir to take the throne, causing Valeria to be thrown back into the chaos of war. Our story begins with Denam, his sister Catiua, and their friend Vyce, a group of Walister-resistant fighters who attack a party they believe to be the Black Knights of Lodis. It turns out, however, that they have instead encountered mercenaries who become sympathetic to the crew, as Denam reveals that his hatred of the Black Knights stems from the fact that they imprisoned his father long ago. Displaced by the ongoing war between Galgastan, Bakram, and Walister, Denam, Catiua, and Vyce strive to find justice for those who cannot defend themselves. 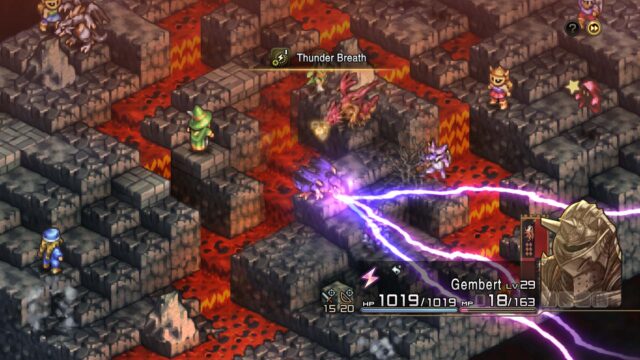 Restricted to covering the first chapter for this impression, I will say that the story is pulling me in. It has all the trappings of a great high fantasy tale full of messy politics, backstabbing, and difficult choices. When I say difficult, I mean it, as the choices Denam is confronted with can often mean life or death for those around him. It means truly thinking about the choices you make, and wondering what the potential consequences will be as the game progresses. The weight of one’s decisions affects how the story can potentially change, and the emotional impact is definitely what continues to draw me in.

One of the first things players of the previous release will notice about Reborn is the graphical improvements. The game’s backgrounds are gorgeous as all the characters and backgrounds have been enhanced for HD, though character sprites unfortunately did not get the same crisp or clear treatment. The second thing to notice is that the game’s user interface has been enhanced and upgraded as well. Players will be able to see targetting lines for projectile attacks and spells to see if they will hit. The map can be adjusted into a flat model so it’s easier to see how units are spread across the map or hidden behind objects, but it does not allow for a full 360-degree view, which is disappointing.

Tactics Ogre: Reborn‘s combat is quite unforgiving; there’s no hand-holding, and while players can redo turns or movements, the game is all about precise placement and it has no problem punishing a player for a bad decision. There are also cards to collect throughout the battle, each providing buffs that can turn the tide of combat. These buffs range from a player’s physical or magical damage going up to MP restoration. Players can have up to four buffs equipped on a character at once, and the more buffs a unit has, the more damage it can do on the battlefield. However, if the enemy gets these bonuses, they can really cause some havoc. Those wanting a difficult, thought-provoking tactical experience will get their money’s worth here. However, it’s important to note that players must prepare their characters before combat, meaning that they need to ensure that characters have items equipped. One thing I learned quickly was that, unlike other TRPGs, it’s important to equip healing items before combat. If you don’t, a lot of battles become very painful. 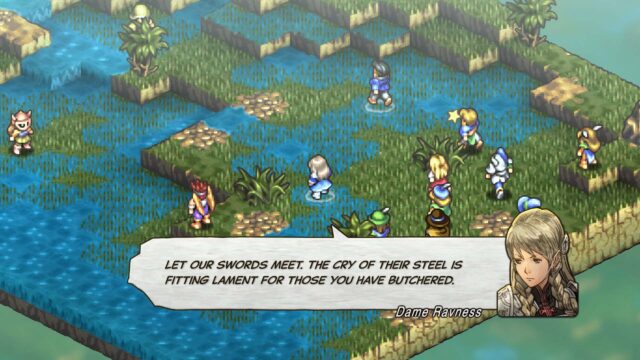 Through the swamp we go!

Characters also accumulate MP as opposed to starting with it, meaning that they must move around or utilize auto-skills to acquire it faster. This means magic users are unlikely to be able to lay waste to foes on the first turn, but as they build their MP, their magical attacks can become far more deadly. Changes to the PSP release include units leveling individually as opposed to classes levelling together. It also means there’s more room to experiment with class types and the types of skills and magic each unit can have at its disposal. There’s also a Union Level, meaning that units are capped at a certain level until more of the story is completed. While players can grind in training battles for more skills, the Union Level is there to ensure that grinding isn’t fully necessary.

I’m roughly eight hours into Reborn and I am having a blast. My only past experience with Tactics Ogre was borrowing it as a kid and not being able to understand its expectations at the time. However, there is a lot to love in how welcoming Reborn‘s modern touches are while still containing nearly all of the old-school appeal veterans will be looking for. I’m looking forward to getting through the rest of the game for review and seeing if the Wheel of Fortune will smile favorably on me or punish me for my poor decisions.