While the game’s challenge will hold some appeal to genre veterans, others will find its introduction frustrating.

As a new entry in the re-burgeoning top-down action adventure sub-genre, the inspirations behind Pixel Heart Studio’s Airoheart are clear. With a 2D Zelda template that is readily apparently, players explore its overworld before heading into dungeons where they venture from room to room and try to vanquish what lies in wait. While the game’s challenge will hold some appeal to genre veterans, others will find frustration and some curiously grating presentation elements.

Airoheart puts players in control of its eponymous protagonist in the land of Engard, which is home to two competing races: the Elmer and the Breton. Airoheart is half-Breton but lives among the Elmer with his grandfather. A treaty has kept the Elmer and Breton at a state of tense unease rather than outright hostility. However, a new Breton leader, quickly revealed to be Airoheart’s brother Xanatos, has begun sending out forces to obtain a powerful item called the Draoidhe Stone. Airoheart joins up with a group of Elmer looking to obtain the fragments of the Draoidhe Stone first and put a stop to Xanatos’ plans. 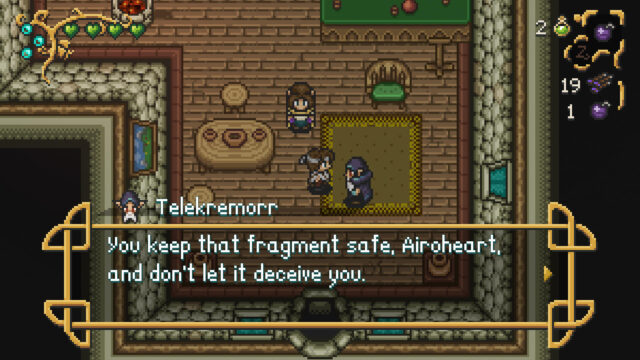 Talking plot devices have a long history of being 100% totally trustworthy.

Airoheart is a silent protagonist, and the opening portions don’t give him much motivation other than to go along with whatever appears to be happening and doing what others suggest. There are some interesting hints at a greater machination behind the scenes and potential to explore Airoheart and his brother’s relationship and history, but ultimately the early story is largely about giving him a reason to go out and adventure.

The game has all the elements one would expect from the sub-genre: exploring the world leads to plenty of dungeons or grottos, with items and new equipment to find with which to tackle foes and dungeons. Things like shrubs and pots can be picked up and thrown, often having items or health inside. The game features a magic system using selectable spells from Runes, though in practice these work similarly to other items. Airoheart can increase his health by finding special plants around the world, while shops will let him upgrade his equipment and boost his very straightforward stats.

Exploration is readily the game’s most enjoyable element. There are plenty of nooks and crannies to wander into in the overworld, and the dungeon pathfinding puzzles work nicely. Players unlock doors and other paths as they progress, with each room often having different enemies or traps to be wary of. The game has all the sub-genre’s core elements and its base appeal present and accounted for; but there are lots of little things that combine to drag down the experience. 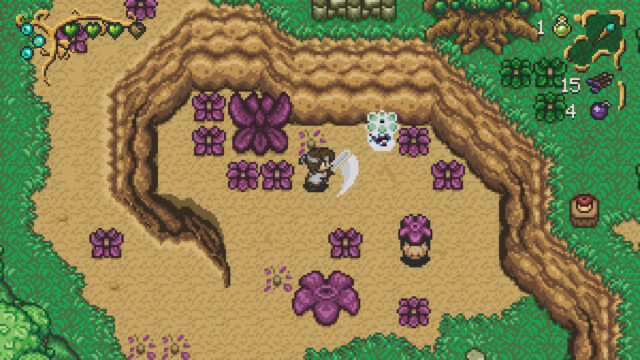 One potential turn-off is the implementation and balance of the combat, which is not welcoming to newcomers. The bump system and enemy hit boxes are unforgiving, and made more challenging by any visuals clues of enemy attacks being incredibly hard to see or judge, if they are present at all. It makes for a large amount of frustration, especially early on when there are few ways to fight back. There’s a great danger that many will only be willing to respawn at the start of a dungeon a certain number of times before finding something else to do with their time.

One particularly curious decision comes in the sound design. The game has a very limited number of sound effects, which includes a loud bang that is used excessively: whenever players are hit, whenever they open a door, and more. Not only is it often at odds with what it’s being used for, it also quickly becomes grating. The rest of soundscape, including the music, is at least otherwise inoffensive but unnoteworthy, and the same applies for the game’s visuals. There are other general polish and quality-of-life issues, with some unintuitive menu controls and slow scrolling text that can’t be sped up.

Airoheart should find its fans among veterans willing to stay patient and deal with its challenges in order to enjoy its explorative element. However, it’s difficult to see much widespread appeal with basics that are very derivative of past games, plus a general lack of polish and quality-of-life features compared to its contemporaries.