In this edition of the column we take a look at Persona 4 Arena Ultimax, the remastered verison of the brawler sequel of the beloved RPG Persona 4. The original incarnation of Persona 4 Arena launched a decade ago, but Atlus is bringing back this 2D fighting game for newer platforms. Persona 4 Arena Ultimax includes all the paid DLC of the original version as well as several visual and gameplay improvements. Unlike Persona 4 Golden, this game is a fighting game, and even when it offers ways for newcomers to feel engaged, entertained, and aware of the events of Persona 4, the main hook is the return of beloved characters. It’s billed as a sequel and narratively speaking it’s a continuation of its predecessor, but it feels more like a spin-off since it’s a completely different genre and also includes characters from Persona 3.

There are several ways to play Persona 4 Arena Ultimax, including a compelling Story Mode, a Versus Mode against the CPU or other players, and a Golden Mode where fighters level up and learn abilities. The Story Mode has four different options and is the closest the game comes to its RPG cousin, which makes it the logical first step for those who bought it because they enjoyed Persona 4. Its story may not be as long and detailed as the one in Persona 4, but it isn’t bad at all. Since the game is focused on the plot, it includes a considerable amount of scenes with occasional battles, whereas the other modes are more focused on the combat itself.

Players are taken back to Inaba months after the events of Persona 4. The Midnight Channel is active once more, with a new combat TV program in the spotlight. The loveable cast of Persona 4 decides to go back inside the TV and fight against this new threat. Fan-favorite characters from Persona 3 also appear on the scene, with both groups joining forces to look for the culprit and return things back to normal. It’s a treat to have all these characters back again, especially since the writing finds satisfying ways to develop them and cross their paths in a compelling adventure. The game gives such an importance to the story that those who are not confident in their fighting skills can opt to activate the auto mode and leave the battles to the CPU while they simply watch and enjoy how events unfold. 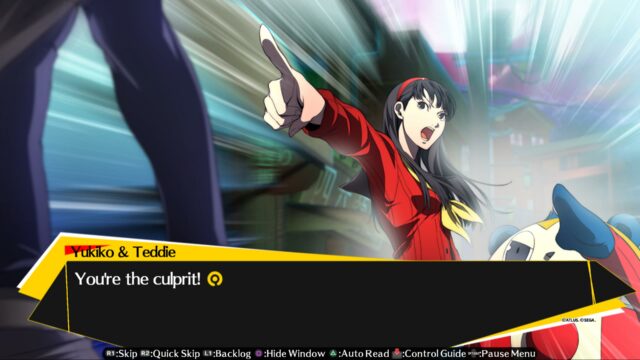 Who is the culprit this time?

The game’s storytelling is amusing and unique, with two different stories to witness: the one released with the original game back in 2012 and the one that comes with the Ultimax version. The story of the Ultimax version is divided into three chapters: one following the cast of P4, another focused on P3 characters, and the last one dedicated to Adechi, with players taking on the role of each set of characters respectively and witnessing the story through their eyes. All characters get their deserved spotlight while the protagonist of Persona 4 only takes the leading role a few times. The original story is told in a different way. Here players experience the story solely from the eyes of one character at a time and have to switch to other characters to view all events. Both stories are satisfying, and completing them doesn’t take a lot of time and definitely leaves players wanting to dive deeper into the battle system that is only used sparingly in this mode.

The other modes range from a casual Versus Mode against the CPU or other players to a Score Attack Mode and a Golden Arena Mode. All these modes have welcome differences. For instance, instead of playing in two-round fights as in most modes, the Golden Arena Mode features single-round matches, with characters leveling up, learning abilities, and gaining supporting skills from other characters. Combatants fight using their Personas and objects that match their personalities. In addition to weak and strong attacks, the game allows players to create combos and summon their Personas to use other abilities. Some traits of the Persona turn-based battle system are also included, such as all-out attacks and ailments. The characters and their fighting styles are varied and enjoyable. Combat is fun, but it feels outdated and not as impressive as other recent fighting games. It also feels, at least in the PS4 version, that the game doesn’t make the most of the controller since there is no vibration and some buttons are not used, with some commands requiring players to press two or more buttons simultaneously. The game offers various levels of difficulty that allow both beginners and experienced players to feel comfortable. While the easier difficulty options enable players to improve their abilities piecemeal, the hardest ones even pose a challenge to experienced players. 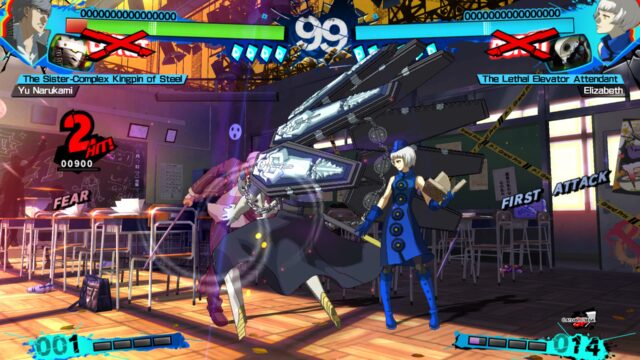 It’s fun to fight against friends and foes.

Like the original game, the art is excellent. The 2D sprites look amazing, with the Personas of each character still being imposing. The color palette of each fighter can be changed with a wide set of options, and players can also fight against each combatant’s shadow version. Each fighter has characteristic objects such as a giant bat that Teddy uses to smash or the microphone that Risette throws at her enemies, and all the animations of the Personas and fighters look inviting. Since the music in Persona 4 is outstanding, the decision to use the same soundtrack is smart. The most iconic tracks also have the power of reminding players of the many joyful hours that they spent with Persona 4. The sound effects are good, and voice acting in English is also as solid and engaging as in the previous game and includes the same voice cast.

Persona 4 Arena Ultimax is a game for fans of the series who want an epilogue or a new way of interacting with these characters. Their return is welcome, providing a short but entertaining experience. The game could also please newcomers and fans of brawling games, but it is certainly not in the top of the genre and has no real hook to lure them in.