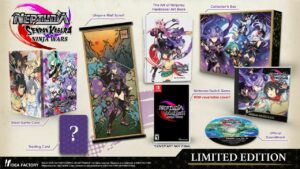 Neptunia x Senran Kagura: Ninja Wars originally released for PlayStation 4 in 2021 and is a crossover spin-off between the Neptunia and Senran Kagura series. Neptunia x Senran Kagura: Ninja Wars takes place in the Game Ninja World, where two nations (featuring Neptunia’s Neptune, Noire, Blanc, and Vert and Senran Kagura’s Asuka, Homura, Yumi, and Miyabi) are battling through their respective ninja schools for dominance before the world is invaded by a machine army. The PC and Nintendo Switch versions will include a new higher challenge difficulty mode as well as alternative costume DLC for all playable characters.