The Amazing American Circus is a zany deck-building game aimed at those who love the obscurity within the circus.

Klabater gave RPGamer the opportunity to take an hour-long tour into the entertainment business. Within its tents, The Amazing American Circus offers a very original adventure as a card-based RPG that’s currently undergoing a Kickstarter crowdfunding campaign. The game sees players upgrading their business and putting on amazing shows to impress hostile audiences. It’s tough to get a full sense for the game’s full potential as the demo is missing many features from the full release and lacks clues to how the story might play out. Nevertheless, both the battle system and exploration look promising while its visual style certainly helps it stand out.

The game sees players taking the role of the manager of a circus aiming to be the best in the country. But this is not just any circus, it’s a dark circus that will find the most peculiar audiences going. By traveling around the USA and organizing spectacles, the circus gains fame and money, performers improve their skills, and more artists, such as clowns and lion tamers, join the tour. The demo showed off two very distinctive mechanics: performances and exploration. While performers have card confrontations with audiences in their shows, the manager can explore the facilities to train the personnel and hire new recruits between shows. Both mechanics are interesting but are going to need support from elsewhere in the game to fully stand up. 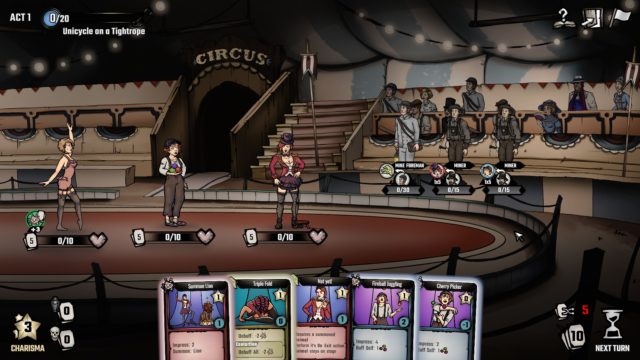 By using cards to control the artists, players need to entertain all sorts of crowds.

Heavily evocative of Slay the Spire, the card-based battle system is well-crafted but not easy to grasp at the beginning. Characters don’t fight aggressive monsters, with the combat instead presenting the artists’ struggle to hold their audience. The public includes all types of denizens — gang leaders, miners, refined ladies, and strange creatures — that can affect entertainers in many different ways. Each performer comes with a unique set of cards, which includes distinctive tricks and strengths. Players choose three members, as well as a star act for the show, from an array of artists to form their line-up, as well as a star act for the show. To have a successful show, they have to fill the amazement bars of all the spectators.

Five cards are dealt at the beginning of each turn, and each card is used for a different purpose. While some are tricks meant to impress, others are used to buff or to defend from incoming attacks. Each card includes a description of the effect it has on the audience or on the performers, as well as a number of charisma and star points. Charisma points enable artists to perform actions, and star points are used to summon the star act. When the star bar is filled, players can summon the main performer; although they cannot be directly controlled, this performance causes the biggest impression. When the performance ends, the circus receives money and each member of the active party gains experience, except for the star act. Some spectacles have only one performance, while others include several of them. With just a few battles, the combat system requires a bit of getting used to, but gets smoother after a while. 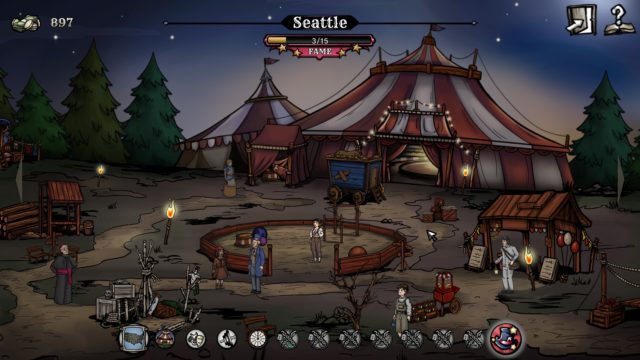 The circus offers many attractions besides shows in the big top.

Exploration takes place after the circus has arrived in a new city. The circus settles and positions its facilities: a training ground, a big top for the performance, and many other establishments where players improve specific aspects of their circus. In one of these tents, players can acquire new cards or upgrade the ones in possession, while in another one they can find recruitable artists. A number of tents on the map were not accessible during the demo, but look likely to provide some additional depth to the management elements.

Visually, the game has a striking style, and it is one of its most appealing features. Bizarre graphics are accompanied by a festive soundtrack that helps to complete the illusion of being in a strange version of the world. Aside from being set in the nineteenth century and having spectators that look like they came out of the Wild West, the demo doesn’t give a lot of hints about the story. The full version, however, promises the appearances of famous people and a number of quests. The addition of a story will undoubtedly help the game become a much more immersive experience.

The Amazing American Circus is a zany deck-building game aimed at those who love the obscurity within the circus. Though the demo only provided a small snippet of what the full game will have to offer, there is a good amount of potential for a strong performance. For those who want to join the circus, the game is set to be released in May 2021 for PC, PlayStation 4, Playstation 5, Xbox One, Xbox Series X, and Nintendo Switch.

Shattered: Tale of the Forgotten King