Sinner is a game that players will likely either love or loathe based on their predilection for having every minor mistake they make punished incredibly heavily.

On the face of it, Sinner: Sacrifice for Redemption is a very interesting title. One of the numerous Souls-inspired titles over the past couple of years, Sinner distances itself by throwing away most of the fluff and just focusing on challenging players to take out its seven bosses before the final boss appears at the end, combining that with an intriguing twist on character growth. The upshot of all this is that Sinner is a game that players will likely either love or loathe based on their predilection for having every minor mistake they make punished incredibly heavily.

Players are given roughly two minutes to be told what the basic buttons are before they are thrown in at the deep end. This is a game that expects players to already be highly competent at this style of stamina-based action RPG, or for them to be happy to learn while being repeatedly dumped back into the hub area following loss after loss. Character growth is not needed; protagonist Adam has all he supposedly needs to take on these personifications of his sins and indeed the game makes things more interesting by requiring him to handicap himself prior to each fight.

Boss fights are long and complex, and players will need to spend a lot of time learning all of the many ways in which they can make life miserable. There’s also no room for error as many will unleash combos that will wipe away all of Adam’s health in no time at all. There is no required or even recommended order to defeating the seven bosses, each of whom require Adam to sacrifice something, such as lowering his health bar or making his shield breakable, but this also means that there’s really no way for players to try and ease themselves in. It’s tough from the start and remains that way. 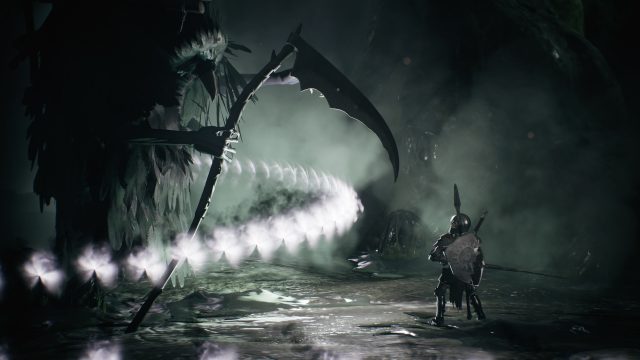 If you’re lucky, this one might only kill you thirty times.

Sinner doesn’t bother keeping up much pretense that it offers anything more than the challenge. There’s nothing in terms of introductory plot and the brief poems that are provided ahead of each boss are little more than window dressing. The designs on the bosses and their abilities are quite interesting and the care that’s gone into those is clear, but every other element, such as the arenas that provide even more dangers on top of the bosses, feels dankly generic. The controls are animation-based as well, meaning that players will not be able to escape from ill-considered attacks or rolls, another way the game ensures that everything on the player’s side needs to come together to emerge victorious.

Dark Star deserves plaudits for what it has created in Sinner: Sacrifice for Redemption with such a small team. There are some interesting ideas behind the game and it should be able to find a dedicated group of fans. However, the flip side of being able to attract those fans is that virtually everyone else will find themselves shut out. It’s a game solely for those who are willing to take punishment after punishment and find the pleasure in very slowly narrowing what will start off as massive margins of defeat.