It truly is a shame that the situation regarding the western release of Monolith Soft’s Wii RPG, Xenoblade Chronicles, threatens to overshadow the game itself. Combining a fantastic story, excellent battle system, and an absolute plethora of side content, Xenoblade is consistently a joy to play from beginning to end. The end result is a game that really does deserve recent plaudits as one of the best JRPGs in recent memory.

Following a short prologue that helps set up the world and introduce players to the battle system, Xenoblade follows the journey of Shulk and his companions. Set on a world consisting of two titans, now dormant, Shulk and the other inhabitants of the Bionis find themselves facing mechanical invaders from the Mechonis. Xenoblade is packed full of story right from the beginning, which does make it difficult to talk much about plot specifics without revealing some important spoilers. The beginning scenes, one unexpected twist in particular, do an excellent job of establishing the main characters’ early motivations, and Xenoblade just continues upwards from there. A few hours into the game Shulk comes into possession of the Monado, a special sword that is particularly effective against the attacking Mechon and forms a focal point of the plot, being able to let Shulk see glimpses of the potential future. These future-seeing abilities of the Monado are very well used in both the story and a number of gameplay features.

The story is exceptionally well told and superbly paced, always building upon motivations and previous events, and eventually leading to a fantastic, epic and fitting climax. Foreshadowing is present, but the hints are never made obvious before the time of the reveal, and it feels much more like a reward to discover any suspicions were correct rather than killing suspense. Xenoblade’s world is fascinating, with its own unique mythology that slowly comes to the forefront as the game progresses. The different races all have their own quirks and personalities, with the party characters being very likeable and having believable motivations for their actions. A good amount of screen-time is also given to the antagonists, helping players to care about the story and understand the reasons behind it. While there is no blood or the like to speak of in cutscenes, the game nonetheless does a very good job of conveying the levels of horror or shock necessary in scenes, notably early on during the first Mechon assault. 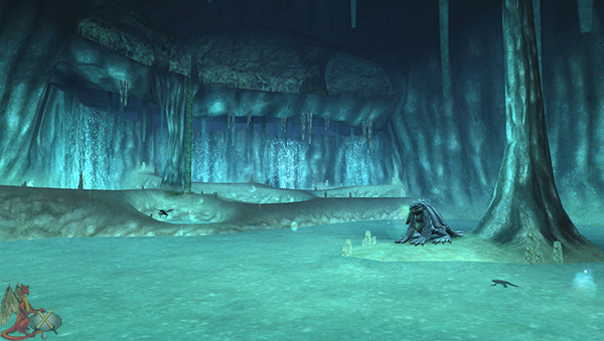 This is in fact a lung. The Bionis actually has three of these.

Xenoblade’s world is stunning to look at, with a large number of excellent vantage points where one cannot help but marvel at the fantastic views on offer. Locations each have their own themes, and with the inhabitants and changing weather following those themes along with the transitions from day to night, a world has been created that really feels alive. In addition, the various breeds of monsters all have different behaviours, and this further adds to the immersive feeling. The only downside to the visuals is that character models, particularly faces, do suffer a lack of detail in cutscenes due to the Wii’s technical limitations. However, Monolith Soft has utilized their designers well and have done a very good job making each character recognizable and still pleasing to look at. Models also change to reflect their equipment and this is very much appreciated in giving players a sense that characters are growing and becoming stronger. The lip-sync is occasionally off, but thanks to the excellent voice work and writing more than making up for it, this is easily ignorable.

Despite the slight mishap with the lip-sync, Nintendo of Europe’s localization is another high point of the game. Each cutscene is fully voiced, and the British voice actors only help add to the experience, not only by being a refreshing change from the usual suspects, but by doing an excellent job in their own right. Various accents are given to each of the characters, and these help build their personalities, special mentions going to actors for Reyn and Melia. The in-battle chat is also effective at adding more feeling to the encounters and conveying the participation of the AI-controlled characters. There is a bit of repetition in some of the victory statements said at the end of battle, but it’s varied enough that it very rarely becomes noticeable. Xenoblade’s music is also top-quality, adding extra emotion to the story scenes, urgency to the battles, and helping make the exploration and journey a very pleasant experience, in addition to being highly enjoyable to listen to on its own.

Xenoblade‘s battles are fairly fast paced, real-time affairs that take place without changing screens. Players take control of one character from three active participants, with the other two being controlled by the AI. Each character has an auto-attack, but can also use any of eight arts that can be set by the player. Arts have different effects, including healing, inflicting a status effect, or simply causing lots of damage, and can be used freely, but they do each have a cooldown time before they can be used again. Certain arts can utilize teamwork to cause more effective status effects, such as stunning an enemy briefly. Simple commands can be issued; to concentrate on one enemy, engage at will or converge on the player character, but otherwise it is down to the AI to determine the best course of action and what arts to use. Fortunately, the AI is very good in this respect (including healing) and more than ready to take opportunities to cause the more effective status effects when presented.

Each character has a unique special art that can be used after a certain number of auto-attacks hit. Shulk’s art is different from the others’, in that it can activate any one of the Monado’s distinctive abilities. These abilities will prove very useful in a good number of boss fights (but are never an absolute necessity outside a select few story battles) and can certainly help players get out of a tight spot. The Monado also has the ability to sense when the tougher enemies are preparing a special move and will warn players, enabling them to react and prevent the move from being unleashed or to help mitigate the damage. Extra abilities are learnt as the game progresses and, although there is no choice in the abilities a character will learn, players can use ability points to increase their power as they see fit. Overall, the battle system is highly enjoyable and very deep with many further nuances, such as character position, also coming into play. Aside from setting and leveling arts, a fair amount of customization and player choice is enabled by the equipment system. In addition to the usual different strengths, most equipment is also upgradeable through craftable gems, which can confer a large number of potential bonuses, while others will come with these gems permanently affixed. 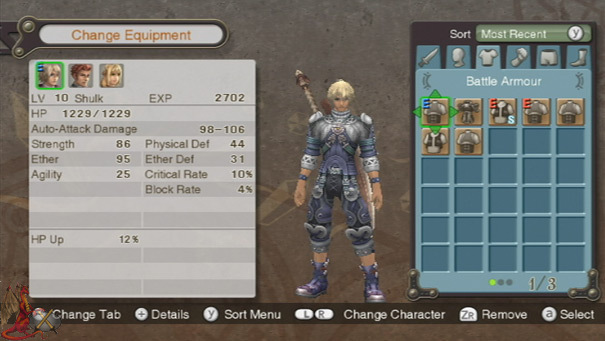 The eternal conundrum: should the outfit match, or is looking stupid worth the extra fifty damage?

Xenoblade also contains a staggering amount of additional content outside the main story that adds a great deal to the experience and the world. There are an incredible number of varied side quests, meaning that players will almost always have something to do if they don’t yet wish to continue the story. Most importantly though, these quests are actually enjoyable to do, thanks to various inclusions greatly reducing the tedium that can come often come with such content. Aside from giving out useful rewards, completing side quests also helps fill out the affinity chart, a diagram showing the relationships between NPCs throughout the world. It’s highly rewarding to see the links build up and show the relationships that develop as side quests are completed. Affinity also extends to party members and can be improved in a number of ways, with high affinity unlocking special conversations between the characters that give players further insights into each of them.

Exploration is highly encouraged, with the side quests requiring players to visit all corners of the world, and experience and skill points are given out whenever a new or secret area is found. The exploration aspect is greatly helped by the lack of any game over screen: should a player be defeated in combat (perhaps after running into one of the exceedingly high level creatures tucked away in many of the locations) or accidentally fall to his death, the game simply resumes from the last landmark visited with story and quest progress intact. The side quests also get added usage out of the Monado, providing short scenes relevant to the quest and informing players if they stumble upon an item that may be needed for a future quest. Xenoblade also contains in-game achievements, and while these themselves don’t offer any rewards outside a nominal amount of experience points, it’s always pleasing to be notified when one of the achievements is accomplished.

One of the few complaints that may be directed at Xenoblade is that players who do all the side content may find it a bit lacking in difficulty, discovering themselves slightly overleveled. While it is certainly possible to trip up in this state, it may have been preferable to include a limited amount of scaling for monsters or an adjustable difficulty setting. Thanks to the battle system still being engaging despite this, and all the extra content, there is still a supreme amount of enjoyment to be found even without too much challenge. Xenoblade is easily a sixty hour game if only concentrating on the story, and players who wish to complete all the side content will likely find themselves surpassing a hundred hours without realising. When a lot of other genres may have been somewhat lacking in length recently, it’s pleasing to see Xenoblade keeping the content ratio so high. Players will be able to save their clear data and start a new game plus if they wish, which carries over character levels, party affinity (but not the rest of the affinity chart), and the majority of equipment and items.

Despite its length, Monolith Soft has managed the feat of keeping Xenoblade an incredibly enjoyable experience throughout. The top-notch story only furthers the fascination in the unique world that has been lovingly created, and it is a world that fans of the genre deserve to see. Not simply an incredibly solid experience throughout, both the world and abilities of the Monado add something new to the experience, and the substantiality of the side content will require an extraordinary amount of effort for future games to match. While the comparative lack of RPGs means it isn’t hard to be one of the best on the system, Xenoblade goes beyond that to be right up there with the best of the console generation as a whole.