Hungary’s Neocore Games isn’t a particularly new face in role-playing games, although its creations since 2009, King Arthur and The King’s Crusade, have veered more towards a combination with the real-time and grand strategy genres. The Incredible Adventures of Van Helsing marks a large step towards action-oriented RPGs such as Diablo and Torchlight, and it looks as though the company has a potential winner on its hands if it can continue this highly promising start. Despite likely comparisons to the aforementioned games, Van Helsing still stands out thanks to a stronger emphasis on its writing and humour.

Players start off by creating their personal offspring of the now-retired, legendary vampire hunter Abraham Van Helsing with some minor customisation options, primarily his name and colour scheme. Following in his father’s footsteps as a monster hunter, the younger Van Helsing has been tasked by the resistance of Borgova, the gothic capital of the fictional Eastern European country of Borgovia, to eradicate the menace that has taken over. Lending assistance to Van Helsing both in and out of battle is his partner, the ghostly Lady Katarina, who has lent her assistance to the Van Helsings since Abraham rescued her during a previous trip to Borgova.

The humourous and snarky writing is a definite strength and helps give The Incredible Adventures of Van Helsing a lot of character. The snarky interactions of Van Helsing and Lady Katarina are a delight, and most of the supporting cast is more than happy to add further entertaining life to the setting. The humour isn’t just limited to Borgova’s inhabitants, with a number of pleasing references to Monty Python and Lord of the Rings amongst others. Neocore Games has previously stated this is intended to be the first part in a trilogy, which may go some way to explaining a fairly limp ending that obviously hints that Van Helsing’s adventures are far from over, but in general the game does an admirable job of creating an enjoyable setting and extremely likeable characters whose return in future games should be eagerly anticipated. 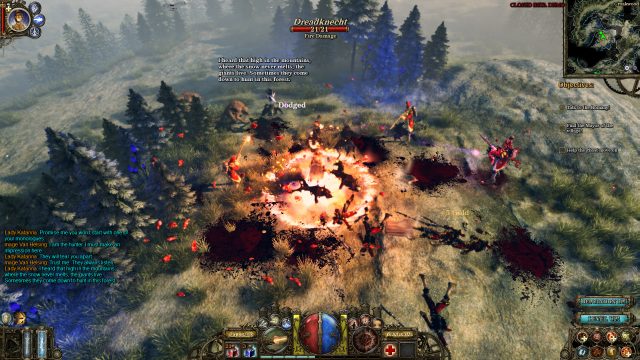 Or to just scavenge the ridiculous amount of giblets that hunters like Van Helsing leave behind.

Van Helsing frequently finds himself cutting or blasting his way through vast swathes of enemies as he journeys through Borgova and the surrounding areas. Players can switch freely between gun or sword, although it is likely more advantageous to focus on one of these with respect to skills and attributes. Lady Katarina can also physically manifest herself and participate in battle, in a similar manner to pets seen in certain other action RPGs, also with the ability to use either gun or sword depending on the player’s choice, with her own slightly smaller set of equipment and skills. She also has the ability to remain in her ghostly form, which gives Van Helsing benefits but prevents her from assisting directly with enemy destruction.

Van Helsing can have two attacks set for each weapon, each corresponding to a mouse button, with an option unlocked part of the way through that allows another two to be set as backups and swapped in with a single keyboard press. Players can also make use of Van Helsing’s rage meter, which builds as he kills enemies, to add a power-up to their next attack. The skill system is one area where there is some room for improvement; the UI and controls aren’t as clear as they could be when it comes to using the power-ups and getting to grips with the system, and there isn’t much reason to use more than the standard attack and one area attack throughout the entire game on the normal difficulty. Overall, however, the battle system is generally very solid and enjoyable. There’s decent variation in the types of enemies and dealing destruction to groups of them is a very satisfying experience.

As to be expected from this type of action RPG, loot is liberally dropped, and players will find it quickly filling their bags. Fortunately, Katarina can be sent off to sell unwanted items or purchase potions, while Van Helsing can also teleport through the Ink, a supernatural alternate dimension, back to his lair and return to where he left off once supplies have been restocked and loot sold. Exploration is another mostly enjoyable part of the game; each area usually has multiple routes through with lots of nooks and crannies to check out, and it’s very easy to get sucked into searching these in case something neat is hidden within. Van Helsing’s secret lair also provides a nice occasional break from the exploration, which can admittedly get a bit tiresome in some of the game’s larger areas. Here players can create and place traps for when the lair comes under assault from waves of Van Helsing’s enemies, with good placement being key for helping Van Helsing make sure that the enemies don’t manage to sneak by and attack his allies holed up inside. 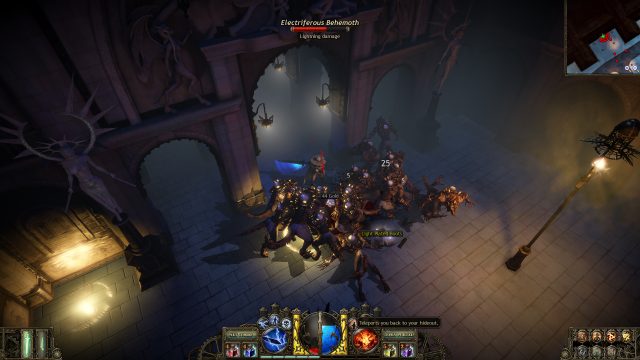 The game offers four difficulty levels at character creation, along with an optional hardcore mode that operates the usual perma-death feature. For the most part the game strikes a good balance on normal difficulty, providing some areas of challenge but still allowing giblets to fly at a decent rate. The main issue with difficulty comes from the fact that the developers seemingly use just one tactic for increasing difficulty – numbers, which is most obviously used for the game’s final boss, who becomes almost trivial after the ridiculous number of minions are dealt with. Fortunately, the normal game somewhat counteracts the annoyance of being suddenly swamped with a generous revive mechanism that allows players to revive where they died for a small percentage of their gold, or back at the lair for free. Some of the more scripted bosses that require players to use the environment or think a bit more tactically are quite interesting, and it would be preferable to have more of these over the areas where the developers have simply placed more enemies than usual.

The game can be completed in less than fifteen hours, during which players will likely have vanquished around ten thousand foes, but there are a number of sidequests and post-game scenarios to help satisfy players’ desires to explore Borgova and spray monster parts all over. The most replayability likely comes from starting again at a higher difficulty. Multiplayer is implemented, although this first time around it feels to be more of an afterthought. Up to four Van Helsings can meet in a multiplayer room to adventure together, while players can also select the “Go Online” option from the menu at any point, which seems to result in the sudden appearance of a random fellow Van Helsing nearby, who more often than not disappears equally as quickly without much interaction. The lack of multiplayer focus doesn’t really take anything away from the game, and it can be assumed that this aspect will be improved in future games, but those hoping to find a particularly substantial multiplayer offering may struggle to find it here.

Overall, Borgova looks great, the locations are all distinct and the gothic-noir flair that permeates the surroundings adds to the setting. Characters are also pretty distinct and nicely attuned to the setting, although players may be a bit disappointed at the relative unflashiness of most of the game’s skills and the general lack of variety in Van Helsing’s potential wardrobe, at least outside of the nice hats. The way enemies often explode, especially when in large groups, is very satisfying, although those likely to play in more social situations or places may prefer to use the game’s option to turn off the effects for blood and scattering of unidentifiable body parts. The music is a very enjoyable listen, with distinct and fitting themes for each of the game’s locations, and the voice acting is another area of strength, helping the humour with a high-quality mixture of deadpan, snarky, and hammy deliveries where appropriate. Van Helsing and Katarina’s voicing in particular helps to convey some great chemistry between them. With Van Helsing’s first set of adventures, Neocore Games seems to have hit its stride very quickly. These first steps are a strong start for a series of much promise, and RPGamers should find plenty of reasons to desire to return to Borgova in the near future and create yet more monster giblets. 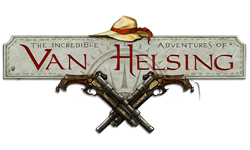