Even though Soul Hackers 2 is a follow-up to a cult game that was released more than twenty years ago, it managed to raise interest and catch the eye of many players who have enjoyed Atlus’ latest releases. More than the fact that it is a sequel to Devil Summoner: Soul Hackers, the hook is that it is a spin-off to the acclaimed Shin Megami Tensei series. Featuring demons, a cyberpunk setting, and turn-based combat, Soul Hackers 2 has obvious similarities and the same high standards as the parent series. Including most of Shin Megami Tensei’s staples, it undoubtedly welcomes newcomers to the franchise in a friendly way.

The story begins when Aion, a digital being that oversees the actions of humankind, sends two agents to protect the world from imminent destruction. Acquiring human bodies, Ringo and Figue begin their mission, discovering that an organization of Devil Summoners called the Phantom Society is behind the attempt. The inclusion of the Phantom Society is the only reference to the previous entry, so there’s no need to be aware of those events. Players take control of Ringo and recruit three Devil Summoners: Arrow, Milady, and Saizo. Aided by Figue, this newly formed party finds out that the leader of the Phantom Society, dubbed Iron Mask, is trying to gather the Covenants, which combined could give the host the power to destroy the world. The mission then becomes to find the Covenants before him. Overall, the story is engaging and well designed, including a couple of welcome twists and interesting interactions that entwine the fate of the summoners with Iron Mask and the Covenants. While the plot doesn’t deviate from the initial premise and is somewhat uncomplicated and less ambitious compared to other titles within the Persona and Shin Megami Tensei family, it makes it easier for newcomers to come on board.

Ringo is a likeable protagonist who is intelligent, innocent, and has a lot of digital knowledge. Figue usually acts as her big sister, and their relationship is fun to witness. The game also effectively explores how Ringo and Figue start out perplexed by human reactions and emotions, but become more humanized as the story progresses. Arrow, Milady, and Saizo have contrasting personalities and interesting backstories that link them to rival Devil Summoner organizations, and the way Ringo recruits them is distinct as RPGs go. Besides the adventure that they share, they hang out at the bar and chat about superfluous topics that enable Ringo to understand their ideals and motivations. Additionally, Ringo can explore their souls, which allows her and her teammates to witness meaningful fragments of the Devil Summoners’ pasts.

A cyberpunk version of Japan serves as the backdrop for the game. Featuring futuristic views and locales depicting a society evolving technologically while abandoning some of its traditions, the city sports several intriguing places to explore. While most places of interest are shops, other deserted areas serve as dungeons where enemies roam. This cyberpunk version of Japan is consistent with the story and helps make the experience more immersive. 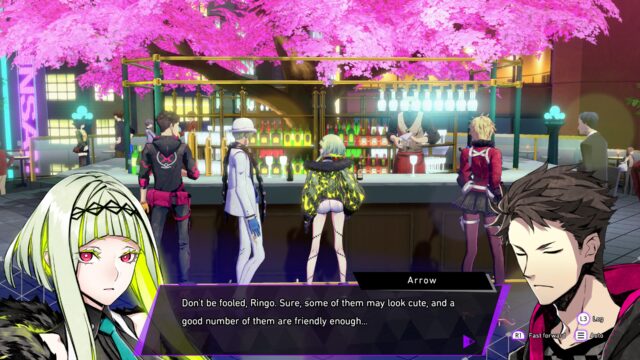 The bar is always a good place to deepen bonds and learn a thing or two.

Exploration is an essential part of the game and is largely entertaining and satisfying. Ringo can interact with humans, with a chance of deepening the bonds with her teammates. Each of Ringo’s allies has a Soul Level, which is a representation of their bond with Ringo. Players gain soul points by attending hangout events or by choosing certain answers throughout the story; there are certain occasions when players are prompted to choose an answer, and each answer deepens the bond with the character indicated. The bonding feature is fairly simple but a welcome touch. In addition, deepening bonds is a requirement to obtaining Map Skills such as avoiding weak enemies or running faster. In this way, the game encourages players to interact with their comrades.

As the story progresses, players get access to more places in the city. The game’s structure oftens sees players going to certain realms for items or information, before traveling to a desolated section of the city to track the Covenants. Players can easily move to all locations using the fast travel option, and the party has a safehouse where they can rest or have meals, which grant bonuses such as recovering MP while exploring dungeons. After entering a dungeon, Ringo uses Demon Recon, an ability that sends out demons to scout the area and find items or recruitable demons. Instead of finding chests, players rendezvous with their demons and receive money or items from them, as well as being introduced to other demons. It’s a good good twist on series’ usual combat-based negotiation, and the process is pretty straightforward; Ringo needs to give them what they request, which is notably simpler compared to other SMT games. Ringo gets optional requests from a local club, and they are mostly short, fun, and grant good rewards, giving players good reason to fulfill them. There is also a dungeon called the Axis that is the representation of the characters’ souls. By exploring the Axis, Ringo learns about the past of her teammates and gains new abilities. While it’s mostly optional to explore the Axis, this enormous dungeon is worth the time. 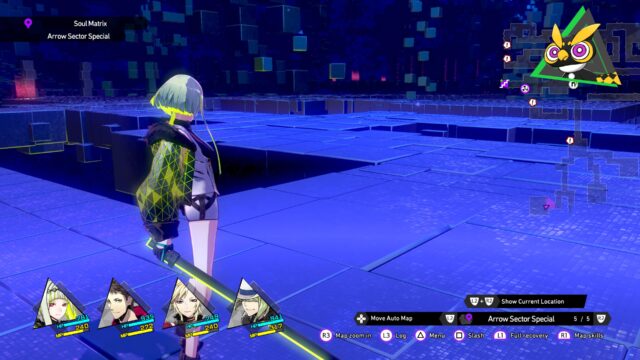 What will Ringo find inside her teammates’ souls?

Soul Hackers 2 gives an adequate twist to the well-known turn-based battle system of its parent series. Each party member equips a demon, with their set of abilities and affinities depending on the chosen demon. There are no extra turns awarded for attacking weak spots, but those who exploited a weakness prepare for the Sabbath, a powerful attack at the end of the player’s turn. The more joining this attack, the more damage dealt. In addition, some demons have abilities that can be unleashed after the attack, such as draining HP or MP.

Status ailments and elemental weakness play major roles, with physical and gun-based attacks included on the list of possible weaknesses. With abilities such as raising the number of stacked units for the Sabbath, Commander Skills can drastically turn the tables in battle but need certain conditions to be used. In addition, demons can only be swapped during battle using a Commander Skill. The game also features some passive abilities that trigger by chance but that are really welcome, including an HP recovering skill and an enemy action canceler. The essence of the iconic battle system is preserved, but the refreshing tweaks give the battle system of Soul Hackers 2 an identity of its own. 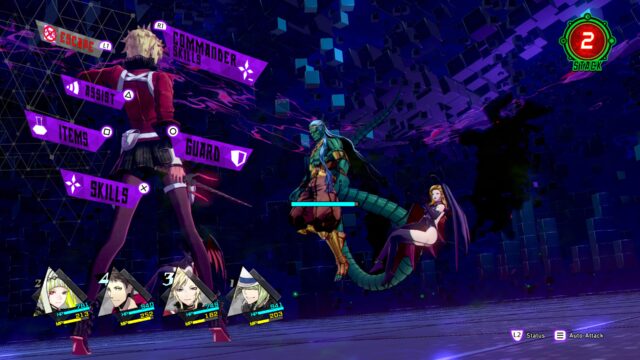 Devil Summoners get to explore and fight demons in their own souls.

Besides a demon, characters can be equipped with three object types: a COMP, the weapon used to summon demons; a defensive accessory; and mystiques, items with effects such as raising the percentage of damage or reducing the MP cost of abilities of a specific element. There is a store where players can customize their COMPs, increasing their attack power or affinity with certain elements, as well as adding new abilities. If players increase their affinity level, they can equip more powerful mystiques. The use of mystiques and COMPs is a distinctive feature and allows players to customize their characters in a satisfying way.

Enemies are shown in the map and can be slashed out to get an advantage in battle or dodged to avoid engaging in combat. There are three types of enemies: normal, rare, and risky. Rare enemies drop special items that can be sold for a high price but try to escape after a few turns, and risky enemies are drastically stronger than normal ones but give tons of experience in exchange. Even though the number of demons is good, it is notably lower compared to the parent series and there’s no demon evolution, but it means a less overwhelming list of enemies and possible recruits. Instead, each demon has a level limit; after they reach it, they start leveling up slower, but in exchange give players certain items, mainly mystiques. Fusing demons takes place in a circus, and it includes normal, two-demon fusions and special ones that need to be unlocked and require several demons. 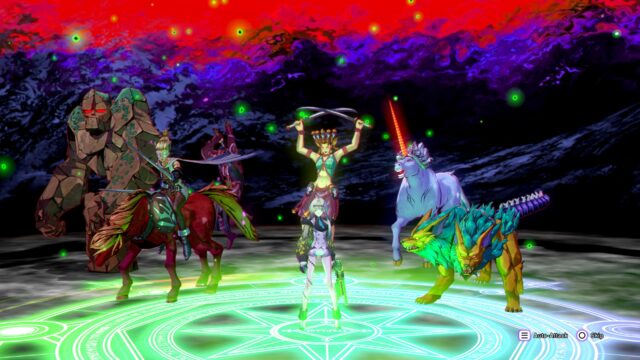 Demons look formidable, especially when they are getting ready for a Sabbath.

The art style of Soul Hackers 2 maintains the essence of Shin Megami Tensei but stands apart from the parent series in the details. Making physical representations of digital beings and using neon tones, the game is visually distinctive and alluring. Using the same designs as previous games, demons look as fantastic as usual. The city and the Axis also look remarkably appealing. The soundscape has a good mix of tracks that don’t overstay their welcome. Jazzy tunes are present during less serious events, a fitting ethereal piano accompanies the exploration in the Axis, and hard rock tracks make the combat more stimulating. The English voice acting is excellent and includes helpful commentary during exploration. The visual style and the soundtrack match neatly and help to make the adventure highly enjoyable.

Soul Hackers 2 is a great spin-off. It isn’t as long or ambitious as other Shin Megami Tensei titles, but it’s clearly made with the same quality. While the reduced number of demons and the simpler mechanics can be a negative for veterans, Soul Hackers 2 proves to be a much friendlier starting point for newcomers. Fans of the franchise will likely enjoy this installment, even if it lacks the complexity of other titles in the series.