The love Persona 3 has garnered since its release in 2007 has been no secret, especially here at RPGamer. However, since the game has seen two prior versions on the PlayStation 2, many might wonder why they should pick up another version on the PSP. There is little different about the foundation of Persona 3 Portable, as the dungeon crawling is still there and the social links are back in full swing. What is new is a streamlined interface that is perfect for a portable system and that fits wonderfully with this game’s formula. The addition of a female protagonist option also brings new social links to the table. Are these changes enough to make a replay worthwhile? Should new gamers jump in with this version? The answer to both questions is yes.

One of the most appealing aspects of Persona 3 is the story and the associated social link system. This day-by-day progression tosses players into the role of a high school student who has to forge and maintain relationships both in and out of school. The simulation portions of Persona 3 Portable remain relatively unchanged from the original, though slight tweaks have been made. The new female protagonist offers brand new social links with various characters from the original along with brand new ones. Not all of the links are new though, as some old ones have been retained on the female side. A few of these were fun to see the new perspective on, but most of the repeats weren’t drastically changed from the first time and were not as interesting the second time through. For those that are revisited, some have merely just changed the gender text, while others take on a whole new and entertaining context.

Persona 3‘s main quest remains unchanged whether playing as a male or female. The world is being tormented by shadows, evil creatures that lurk during a special hour between days known as the Dark Hour. Normal people are unaware of this hour, but special individuals remain awake during this hour and have a special potential to summon personas to do battle with these shadows. A dorm full of special students known as SEES, the Specialized Extracurricular Execution Squad, are the only people who can do anything about these shadows and protect the world. As the player progresses through the year, new faces and problems arise. It’s a gripping story with wonderful, if a little daunting, pacing through over fifty hours. The game throws out quite a few twists and turns that makes for a great overall story experience without falling back on lots of typical game clichés, though it isn’t without a few. The female perspective doesn’t deviate from the original male’s in terms of overall story arc, so either side works for an initial playthrough. 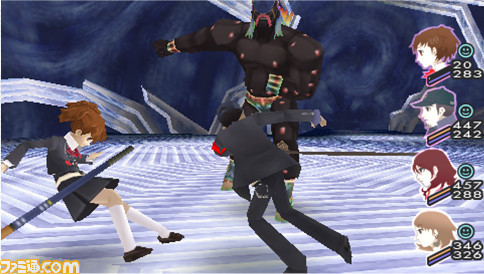 Junpei to the rescue!

Persona 3 Portable hasn’t changed drastically it terms of content, which isn’t a bad thing, but the interface has been completely streamlined. Gone are the characters moving around in 3D environments, as those have been replaced with a pointer and cursor system for navigation. There is a quick menu option for fast travel to most key locations available at the press of a button. This helps to cut down on mundane travel. There are also an increased number of locations to save, which is a nice touch. While scaling this back does lose a little of the atmosphere of the game, the streamlining outweighs any negatives on the world map. The character portraits used in place of the models are highly detailed, but lack the interaction of the 3D characters. The only place this really hinders the experience is in the cutscenes during important story events and during social links, as there is a lack of animation. For the majority of character interactions this streamlining is welcomed, but for some of the more emotional scenes it would have been nice to see these actions taking place like the PlayStation 2 version showed.

Along with these improvements to the interface come other updates to the combat system. Most noticeably is the option to directly control all party members, a feature added in Persona 4, but not available in prior versions of Persona 3. Party members also provide other new benefits such as withstanding a deathblow, protecting the main character from a killing blow, and offering a co-op attack after the leader knocks down an enemy. These are not tied to a specific character’s social link level as was the case in Persona 4, but it’s a pleasant addition. The dungeon crawling remains almost the same except for a few changes. There is no stamina limit while exploring Tartarus, so a character will only become tired if knocked out and not revived. The main character will also be tired the day after exploring Tartarus. There is also now a cost involved when restoring HP and SP in the lobby. Persona collection and fusion is still around to help keep the obsessive busy for quite some time. Mixing and matching to find the right elemental strengths while balancing out weakness is still as enjoyable as ever, though it has been made even more customizable with the inclusion of skill cards. These cards are earned by leveling up a persona to a certain level at which time it will produce a card that can then be used to apply that skill to any other in the player’s inventory. 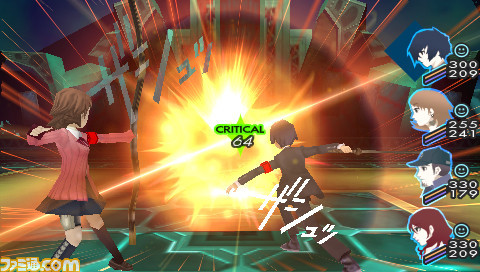 This new version of Persona 3 also features new music for the female path. On this path, the male’s battle theme “Mass Destruction” has been replaced by “Wiping All Out.” While this is very subjective, the female’s theme did not seem as catchy as “Mass Destruction.” A few other pieces have changed on this new side as well, but this one is most noticeable. While the new music might not be as great as the older tracks, the wonderful original music is still available on the male’s path. The game still includes a ton of quality voice acting, though it almost seems like a waste on a portable system where many people play with the volume down. There are also new battle costumes added to the fray. Male characters can wear tuxedos and butler outfits while female characters can wear Santa suits as well as swimsuits. While this version lacks The Answer from FES, it has added the new Vision Quest where players can fight much stronger versions of the shadows bosses. The last change of note to this version is two new difficulty modes: Beginner and Maniac. In Beginner, enemies deal much less damage and players have thirty Plumes of Dusk which allow for a full party revival instead of a game over when killed. Maniac mode is even rougher than Hard, as enemies deal twice as much damage as Normal and are more likely to gain an Enemy Advantage. These new modes make the game more accessible for those of any skill level.

While it is tough to pick a definitive version of Persona 3, this version is an easy recommendation for those who have never played the game before. It’s portable and offers so many tweaks added from FES and Persona 4 that it is one of the easiest to get into. For those who have played Persona 3 before, they might not find a ton of new reasons to go back again, but the new social links are high up on the list of reasons. The new social link content alone gives veterans a great excuse to replay it again. The game adds tons of improvements while only cutting back on a few visual aspects. While they would have been nice, they are not major enough to fault the game too harshly. If you own a PSP, you owe it to yourself to pick this up as this title is a perfect portable formula.