I recently found myself wanting a slight change of pace in my RPG playing and spent a little bit of time looking at some of the indie RPGs that have been turning up on Steam recently following the take off of Greenlight. One such title that caught my eye was Loren The Amazon Princess, a visual novel/RPG hybrid created by Italian developer Winter Wolves. Originally released on Winter Wolves’ official site in 2012, it arrived on Steam in January 2014 with a version also available on iOS and Android. Its visual novel roots means that it won’t scratch the itch of those looking for an action-packed title, but Loren The Amazon Princess is an engaging experience in which fans of both visual novels and turn-based RPGs should find plenty to like.

Despite being the titular character, players do not directly take on the role of Loren. Loren’s mother Karen, queen of the amazon race, has disappeared and Loren decides to go on a journey to find her, with the player character, a slave, sent along to support her. Players can select between Saren, a male human, or Elanor, a female elf, as their avatar with early conversation responses helping flesh out the player character’s upbringing and past actions whilst serving the amazons.

The overall plot is a fairly generic fantasy tale, featuring a number of previously wary factions forced to come together to combat a greater, dark threat. A lot of the fantasy racial stereotypes are in play; the amazons are a proud, warrior race for whom men primarily serve the purpose of procreation (also seemingly one of the few civilisations to still use slaves), while the expanding human empire is at odds with the forest-dwelling elves, who come complete with an exiled dark elf sect. That said, the actual content of the story does an excellent job telling the tale, and its generic roots are easily forgiven. 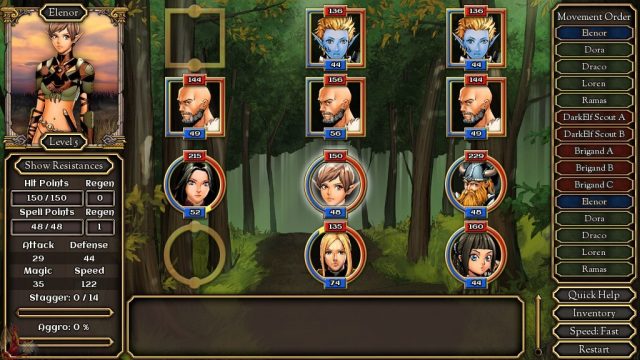 A good number of battles against identical twins and triplets await.

As to be expected of a visual-novel hybrid, many conversations are held within both the story and in the camp. Outside of the initial backstory choices, players do not get to select the exact responses of Saren or Elanor in these side conversations, and are instead given three options — joking, friendly, and forceful — that determines how the character replies. Certain choices will also include a very obvious “(Romance)” option that adds affection from that character towards Soren/Elanor, culminating in a bonus scene and image involving whichever character’s affection is maxed out towards the end of the game. The well written and engaging conversations prevent the narrative from being stale and keep things moving at a nice pace, even if the romance feels a bit unsubtle at times. All the varied characters fit their roles in the story and are backed by plenty of depth and development, and players’ choices throughout the game seem to have a hefty impact on how things might play out in the end for each character. The fact that players aren’t playing as the destined hero themselves also provides a nice touch.

The turn-based battle system is simple, being easily controlled using just the mouse, yet effective. There are up to six combatants on each side, with three spots in the front row and three in the back. Melee fighters can only hit those in the front row but are generally able to soak up more damage, while ranged fighters can hit anyone, usually at the cost of being squishier. Various skills, AOE attacks, healing spells, and status effects are available to both sides, which use up a slowly-regenerating SP bar. There are not too many bells and whistles to the system, but it does the job it needs to do well and is quick and engaging enough to not get tiresome by the game’s end despite battles usually following a similar template and tactics throughout.

Character growth also follows a fairly standard template. At level up characters get some points to upgrade the three main attributes, with a new skill point to be used on a straightforward skill tree awarded every two or three levels depending on which of two level up rulesets is selected at the game start. General attack and defence power is generated using these values, in addition to any bonuses provided by equipment. Although some is awarded at the end of each battle, gold isn’t exactly doled out liberally. However, as the equipment doesn’t need to upgraded very often, with stores stocking rather unimpressive inventory, this isn’t too much of an issue. Loren The Amazon Princess isn’t particularly challenging on its normal difficulty setting, the middle of three. This can be changed at any point, however, even during battle. Most random battles can be dealt with pretty easily, and although they sometimes require a bit more awareness, the bosses are never likely to cause any frustration. 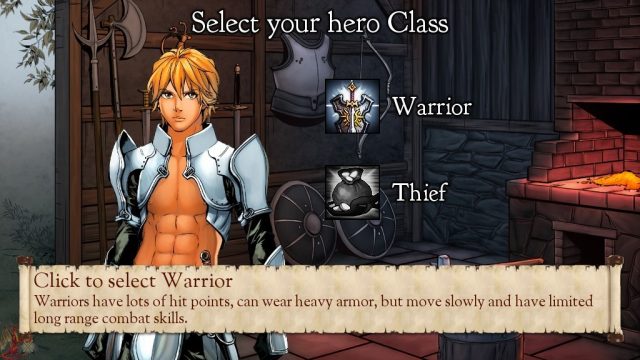 Eye candy for all!

There isn’t anything in the way of dungeons or exploration, with all transport done by simply clicking the desired location on the world map, sometimes followed with an optional random battle. The game provides a number of quests and optional battles that can be initiated by revisiting certain locations or selecting particular quests in camp. The Castle of N’Mar expansion adds another hour or so to the game as well as new party members, taking its completion time up to around twelve hours.

The music is another solid area for the game. It’s very catchy throughout and a pleasure to listen to in the background, even if the track choice for some scenes is a little odd. There is some minimal voice acting that occurs during battles when character use skills or defeat their opponents, which adds a little audio depth to battles, but not much. The visuals aren’t too much to write home about either. The backgrounds and world map are never very interesting, and the battle animations are minimal. Character designs are nice and distinct, evoking the style and skimpy clothing of sword-and-sorcery fantasy, but again this is an area where some more animation would have helped.

With the current fantasy trends going towards more dark fantasy worlds such as in Dragon Age and The Witcher, Loren The Amazon Princess‘ setting feels like a bit of fresh air. It’s nice to have an uncomplicated struggle against evil forces, and the depth of its cast and writing more than makes up for a generic premise and underwhelming graphics. Those who enjoy visual novel-style storytelling and uncomplicated turn-based battles should find a lot to enjoy here. A spin-off title to the game is well under development, with a sequel also in planning, and I’m certainly interested to see how Winter Wolves moves forward. 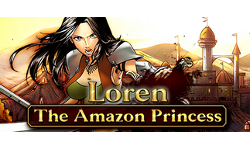