A Tale of Improvement

After last year’s disappointment of Harvest Moon: Grand Bazaar, I was starting to give up on my favourite little farming franchise. The game had left such a sour taste in my mouth that not even a cold glass of Jersey milk could cure my dissatisfaction. Harvest Moon has seen its fair share of ups and downs, especially with the DS iterations being littered with so many problems. Would it ever be possible for one of my franchises to give me joy again? Well, my farming dreams were rekindled with Harvest Moon: The Tale of Two Towns.

Nestled deep in the mountains are two towns that have been feuding for many years. The towns of Bluebell and Konohana refuse to get along, and even have weekly cooking contests to see who produces the best products within the area. While the contests should be about unity and good fortune, the two mayors, Rutgar and Ina, use these events as a means to one-up each other. As the new rancher in the region, the player must find a way to restore the friendship between the towns before a catastrophe happens. According to the Harvest Goddess, the only way this can be fulfilled is by fixing the blocked tunnel that once connected the towns.

Of all the DS titles, Two Towns is the first one to have a truly fleshed out story, something completely unheard of for a Harvest Moon game. All the tasks and goals within the game focus on bringing the towns together, and it never feels dull. The townsfolk of both Bluebell and Konohana have tons of personality, and they want the towns to go back to being friends as much as the Harvest Goddess does. It’s great to see an evolution in story for a series that isn’t known for being plot oriented. Although the number of required plot tasks is minimal, just participating in the cooking contest each week continues to drive the goals forward and provides a feeling of accomplishment. 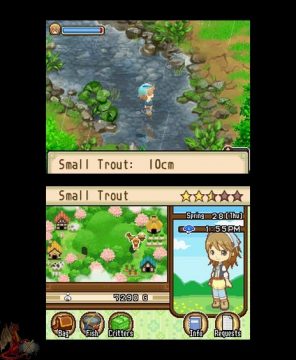 Look! I caught a fish with my bare hands!

One of the key elements of the plot is selecting where the rancher should live. Players who choose the European-style Bluebell will focus more on livestock, while those who select the Asian-themed Konohana will be looking after crops. Thus, town selection determines the main focus of one’s daily tasks. Towns are similar to those of Grand Bazaar where a quality system is in effect. Items grown or produced will have a star-ranking that determines how desirable the product is. Recognizing an item’s quality is important for two reasons: bulletin board requests and the weekly cooking contest.

The bulletin board requests are a new feature in Two Towns, and work well in surprisingly well in keeping the game focused. Players can take on numerous requests in both towns. Completing these requests earns the player useful rewards and increases friendship with the townspeople, as well as a useful reward. Each request details the desired quality of the item, and producing a good quality item will net the player a better reward. As players level up their farming, delivery, cooking, and other practical skills, the game opens up further, allowing for more requests to be taken on, and newer items, animals, and corps to be discovered. Also, with the help of the player’s trusty horse and cart, transporting items between Bluebell and Konohana is a breeze. The cart allows players to carry more weight, and as carts are upgraded, the capacity is increased, making it even easier to take on more requests.

The second driving aspect of Two Towns comes in the form of the weekly cooking contest. Players must cook dishes based on a weekly theme of salad, soup, main dish, or dessert. Making sure one has high quality products determines some of the success rate in the cooking contest. In Two Towns, cooking is the best method of making profit, as cooked items fetch the best prices of anything that can be shipped. However, players need to keep some ingredients aside for the cooking contest, which pushes the plot forward, as residents of Bluebell and Konohana duke it out to see who has the best chefs. While the contest itself is great fun, there’s no real way to determine success in it. Winners are selected randomly, so even if the player produces a five-star item, there’s no guarantee of winning the contest. Furthermore, the dishes selected by everyone else participating are also completely haphazard, making it difficult to determine whether or not players stand a chance at victory. This drawback hurts what could be a fun addition to the series, as there’s no way to resolve the randomness that comes from the contest.

While the bulletin board requests and cooking contest are nice added touches to Two Towns, the game further one-ups itself by simply having plenty of things to do. There are tons of nooks and crannies full of items to be collected in the mountains, and every day the items change. On rainy days it’s much easier to find ore stores, while on sunny days, it’s trouble-free to find multiples of picked items such as flowers, nuts, and critters. One interesting new addition to the series is a hand-catching feature for fishing. Players can now stand in the middle of shallow steams and catch fish with their bare hands. There’s also no limit to how many fish can be caught, and compared to regular fishing, hand-catching uses less stamina, making it a great source for easy money. 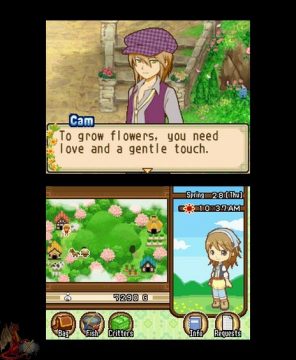 This is Cam. He’s a cutie pie.

Another novel feature is the revamped weather system. Weather can change at midday, which can be problematic when it suddenly starts to rain and the player’s animals are outside grazing in the field. Animals are prone to getting sick in Two Towns and the unexpected change in weather makes it a challenge when trying to stay on top of tasks. Still, this is only a minor complaint, as owning a radio can prevent players from making these types of rookie mistakes.

A new addition that has jazzed up the Harvest Moon formula comes in the form of dating. Besides gift giving and chatting with potential spouses, the player can now go out on dates. Dates can only happen on specific days, and when triggered, players are given a list of potential date spots. Each location nets the player a certain amount of friendship points (FP). Picking the best spot will allow the player to receive the maximum amount of FP, while picking an undesirable spot will result in the loss of FP. There’s a bit of guess work involved in picking the right location, and this bit of trial-and-error might irritate some. It’s important to pay attention to the dialogue spouted by the marriage candidate, as they do give hints to areas that make them feel comfortable.

The graphics of the Harvest Moon DS titles have never been amazing, but they are cute, colourful and get the job done. Two Towns has pleasant graphics, and they manage to look clean throughout compared to Grand Bazaar‘s pixellated graphics. The spite work and environments look great, and there are tons of things to explore, reducing the monotony that sometimes mars the series. The music is still the typical Harvest Moon selection of simple melodies that won’t win any awards, but it does its job well enough to fit into the background. In addition, Two Towns doesn’t have the awkward sound effects found in Grand Bazaar, which is a definite change for the better.

Harvest Moon: The Tale of Two Towns gave me back my farming dream. It hits all the right buttons that Grand Bazaar and Island of Happiness couldn’t, and gives the player tons to do without ever feeling stale. Two Towns is polished, and shows that the Harvest Moon series can stay fresh when given a nice shell to work with. It provides endless hours of entertainment, and with there being so much content to explore, the time flies by. Fans who have been less than impressed with the DS iterations will be able to find plenty of value in Two Towns, and for those looking to get into the series, this is a great portable experience to start with.