There’s something unpretentious about creating a new game and just giving it the exact same title as the original in the series. This is Gauntlet. It’s not a numbered entry; it has no subtitle; it has no system branding; it’s not a legacy; and it’s not a remake, enhanced edition, or port. Unfortunately, the name has more in common with older Gauntlet entries than the gameplay, which presents a short, generic, multiplayer hack n’ slash on Steam. The few times Gauntlet tries to take inspiration from its arcade origins, they are detrimental, while many of the series’ more fun and defining characteristics are left out or minimalized.

Aside from the lack of story and choice of four character classes, the developer’s main attempt for this to feel like a Gauntlet game comes in creating situations where co-op players, most likely strangers on Steam, can annoy and troll each other. Food and gold are frequently positioned on the far side of enemies, encouraging the greedy to steal it before helping kill monsters, and in one set of dark stages, food is hidden in black space where the person in the lead will accidentally grab it. Rooms are usually uninteresting squares or hallways that seem designed with this single mechanic in mind and nothing else.

While gold is indestructible, restoratives vanish when they are attacked. Not only can food and potions be destroyed by shooting them, but auto-targeting skills treat them as enemies, tracking and slaying innocent plates of roast fowl just as effectively as they slay mobs of mummies. A significant score bonus is given to the character wearing a randomly appearing crown when a stage ends, again encouraging players to ignore enemies in a mad rush to grab it, and play in a more defensive, unhelpful manner once it’s obtained. Getting hit makes the crown fall off.

Although these mechanics give the game a throwback Gauntlet feel, there was something more entertaining about them when co-op partners were standing together at an arcade cabinet or sharing a couch. Cursing, apologizing, lying, elbowing, and passive-aggressive plans for vengeance were all part of intentionally stealing the food when someone else needed it badly. On Steam, the social aspect is gone, revenge is impossible, and it becomes a mild irritation rather than a quirky source of amusement. The Gauntlet series has a legacy of labyrinthine mazes, puzzles, countdown timers, frantic pacing, and treasure rooms, but this Gauntlet decided shooting the food was the key mechanic to retain. 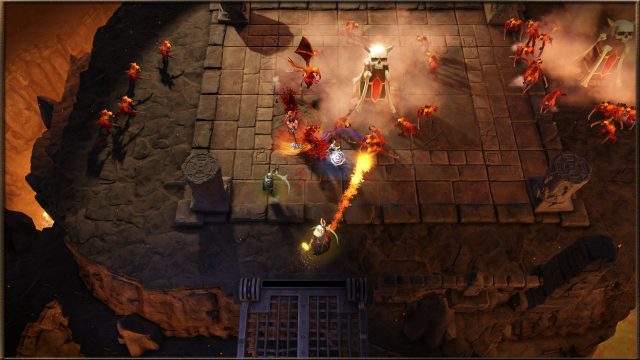 Newbie wizard using a fireball when other spells are better in this situation.

The rest of the gameplay is about right for a generic Steam hack n’ slash. There are four unique characters to choose between, each having a different set of attacks. The warrior, valkyrie, and elf are melee, hybrid, and ranged attackers. The more complex wizard attacks via an array of nine spells created by combining two inputs of fire, ice, or lightning before casting. A basic fireball works well enough for someone who doesn’t want to memorize nine spell combinations, but the class is very powerful in the hands of a skilled player. The only customizable aspect is relics, which can be bought and upgraded with gold and require potions to use. In lieu of experience points or stats, characters gain progress toward masteries unlocked by activities such as killing enemies, beating bosses, shooting the food, and dying in various manners. Masteries are permanent once earned and give helpful bonuses.

Players progress through the gauntlet’s gated rooms, fighting small swarms of squishies, monster spawners that slowly spew foes, elite enemies that use ranged attacks or take more thought to kill, and tougher boss-like encounters. Each of the game’s three chapters has a theme and some unique challenges, but the level design is very basic and repetitive with noticeably recycled and templated rooms. Floors look randomly generated even though they aren’t, and the variety of enemies and challenges within a chapter is small. Whether it’s a pro or a con, it’s good that stages are short because they end right about when the limited content gets old. A chapter has three stages plus a boss fight. Each stage has three floors and lasts twenty to thirty minutes, less in a large multiplayer game. 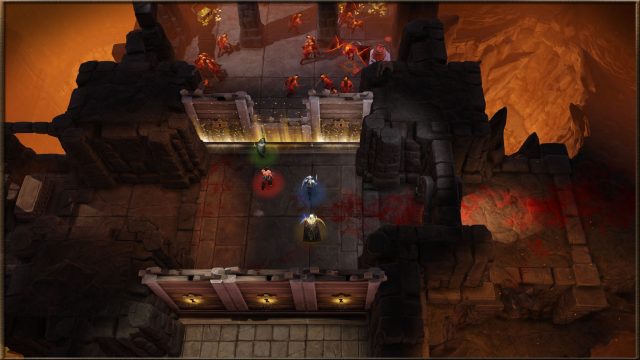 I just know that elf is about to roll past the enemies and steal the gold.

The multiplayer implementation is not great. While Gauntlet can be soloed, it’s a slow-paced, frustrating grind through square rooms full of spawners meant for a party of two to four. Joining someone else’s lobby means being unable to select what stages are played and limited character selection — there can only be one of each class, so the fourth person to join has no choice. Frequently, the last one to enter the lobby will drop if he’s stuck with a character he doesn’t want to use. Mastery, gold, and relic progress are separate for each character on an account and must be earned or bought a second, third, and fourth time. Since this is a co-op game with shared continues, it’s up to each player to what extent he has patience for playing with strangers who are new to the game, bad at it, obsessed with stealing all the gold, or outright obstructive.

The presentation is a letdown. Gauntlet games of old had distinct, immersive settings for their time, but this one lacks that and looks like any other dungeon crawler on Steam. The series has some excellent music in both the original versions and Legends/Dark Legacy, but I didn’t hear any of it in this game, whose music also could have come from any low budget Steam dungeon crawler. Worst of all is the missed opportunity in the taunting commentary. While there is a voiceover that points out when food is shot or someone needs food badly, the voice work is conservative and not as cheesy as it should have been. Character and commentator taunts are repetitive and flat, quickly losing their entertainment value. A series so rich in personality should have brought more of it into this game’s presentation.

Some included throwbacks are purely detrimental. Like a classic arcade game, all four characters have to stay on the screen at the same time, which is awkward in online co-op with no communication. The party can’t split up, progress is limited by the slowest or least experienced player, and battle maneuvering is tough if everyone is spread out. The camera follows behind the party’s movement without doing a good job of showing what’s ahead. Forcing each player to choose a different character was fun in an arcade last century, but with Gauntlet‘s diverse characters and the uneven balance between them at the moment, it’s strange having a lobby roulette potentially force someone to be a hated class, drop from the lobby, or only play as a lobby creator and then wait for others to join and stay. Digital keyboard controls with WASD aren’t nearly as effective as a 360 controller with an analog stick. The dual sticks are more precise when simultaneously avoiding enemies and not shooting the food, and swapping between wizard spells is brutal with KBAM compared to a controller.

I first played this how it’s meant to be played: online co-op with someone I know, on Skype together, lying about stealing the food, and knowing he can plan passive-aggressive vengeance. The originally minor design, presentation, and content issues culminated into a large concern by the end of this meager, six-hour game that expected me to play it multiple times. The gameplay’s foundation is a solid dungeon-crawler that’s responsive online, works well technically, and could have been a blast to play, but drops to mediocrity because of what is, and isn’t, built on it. It’s hard to say who this would appeal to when all the small things that can make a game fun are vapid. The class options are nice, but not a reason to recommend it. Even if you’re desperate for a PC game to play with friends, it’ll take a major content patch or expansion for this to be a worthy experience, much less live up to its name.