Final Fantasy: The 4 Heroes of Light is an odd duck at first glance, for beneath its unique look is a game that seems to deliberately turn the clock back to the early iterations of Final Fantasy. Spending some time with the game will reveal that it definitely has more in common with the Final Fantasy I-V era, but defiantly adds its own unique facets, instead of living completely off nostalgia. The result is a game that adheres to the “something old, something new” saying, but would not have been completely out of place in 1990. The result is not an unqualified success, but anyone yearning for the simplicity of early Final Fantasy plots instead of the modern variants will find something to like.

Random turn-based battles have been part of RPGs for decades, and including them is the antithesis of innovation by 4 Heroes of Light. Turn-based combat is often quite random in the order participants take action, and 4 Heroes of Light upholds this dubious standard. Its Action Point (AP) system is something new, however, and changes the way combat usually progresses. Characters generally gain one AP per turn, up to a maximum of five, and all actions (except Boosting to regain AP) have an AP cost. Simple actions have a cost of one AP, but more complicated processes have larger requirements, forcing a bit of strategy in case a character is suddenly devoid of the ability to use a powerful stratagem. All magic spells use Action Points, meaning that there is no limit on the number of times any ability can be implemented in combat, save that a wait time is imposed before it can be accessed again.

As the game progresses, players acquire Crowns, which the four characters can switch between at any time to access inherent abilities. Thus these Crowns are simply a variant of the Job system seen in Final Fantasy III and V, though they enable lowered AP costs for certain abilities. The Crowns look nifty and affect character statistics and abilities, exactly what a Job system is effective at doing, and this one works very well….

Save for the means by which the Crowns (and regular equipment) are improved, that is. Enemies drop no money in 4 Heroes of Light, instead sometimes leaving Gems of multiple varieties behind. These Gems can, and sometimes must, be sold to accumulate cash, but they are also required to upgrade the individual Crowns and any pieces of equipment the player deems worthy of improvement. While gaining character levels is relatively unimportant in this game, acquiring new Crown abilities and empowering equipment is paramount, necessitating grinding. This is not necessarily a bad thing, but it will slow the game’s pace towards the end. 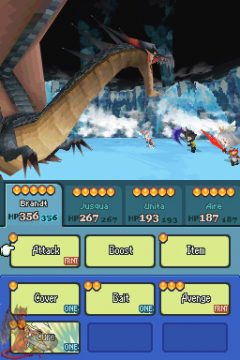 Has Maleficent made the jump from Sleeping Beauty? Probably not, or else she’d be the final boss.

As a deliberate throwback in some regards, 4 Heroes of Light comes with a strict limit of fifteen items per character, including equipment and spell books. This can be very constricting, especially for characters currently operating as mages, though the limit of six abilities that can be used concurrently serves as a means of keeping their inventory slightly less cramped. There are storage venues in every town to keep excess inventory in lieu of just getting rid of it, but managing the easily-filled storage space of the characters will be a constant issue. This is, of course, deliberate on the part of Matrix Software, but that does not make the task any less time-consuming, particularly when the wrong equipment mandates a trek out of the dungeon to restock.

In other matters, however, the inventory of 4 Heroes of Light is refreshingly modern. The elemental attributes of every piece of equipment are visible, along with their attendant effects upon character statistics. What an item will do is never in question, and aside from the inventory limit Matrix did a good job making an accommodating setup.

Final Fantasy: The 4 Heroes of Light‘s story revolves more around exploring the world and attending to the stories of NPCs than it does the development of the protagonists. The four main characters are not mute, but their personalities are undeveloped, and the focus is far more on the locales of their world. The core story begins with a cliché in the form of a princess being kidnapped, and throws plenty more clichés around when evil beings need to be defeated to undo curses and save the world, but the pace is quick and the events never try to take over the proceedings. 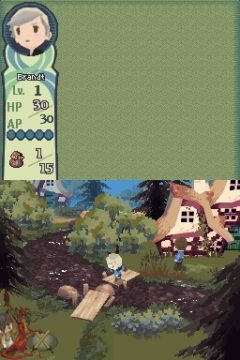 The world is round – very, very round.

4 Heroes of Light‘s challenge is of a different nature than many other RPGs, since gaining levels is not a very useful strategy for overcoming danger zones. Equipment and Crown selection are far more useful, but getting unlucky can sometimes undo even a perfect party. At least there is no Game Over to accompany a spell of bad luck or inadequate preparation; the game simply subtracts half of one Gem type, and then plants the party back at the last save spot. There are some optional Crowns to unlock, most of which require going through very large bonus dungeons, but the core game can probably be completed in twenty to thirty hours.

Eschewing the minimalist approach, Matrix went with a pastel storybook approach to the game’s look, and it works rather well. The game deliberately does not push the DS hardware beyond its capabilities, and yet still manages to be consistently interesting. On the audio front, Naoshi Mizuta did a spectacular job of evoking older Final Fantasy games, creating an intentionally retro soundtrack with strong melodies and pleasing instrumentation. Never less than enjoyable, the music is one of 4 Heroes of Light‘s strongest assets.

Final Fantasy: The 4 Heroes of Light delivers an RPG that has far more in common with early iterations of the Final Fantasy series than anything after V, and slips in a fair number of direct references to them. It succeeds at being a deliberate throwback with enough fresh parts to feel unique, though not so many that it will entice anyone who would not already be interested in such an endeavor. For those in the mood to partake of a deliberately retro Final Fantasy, 4 Heroes of Light delivers the goods.